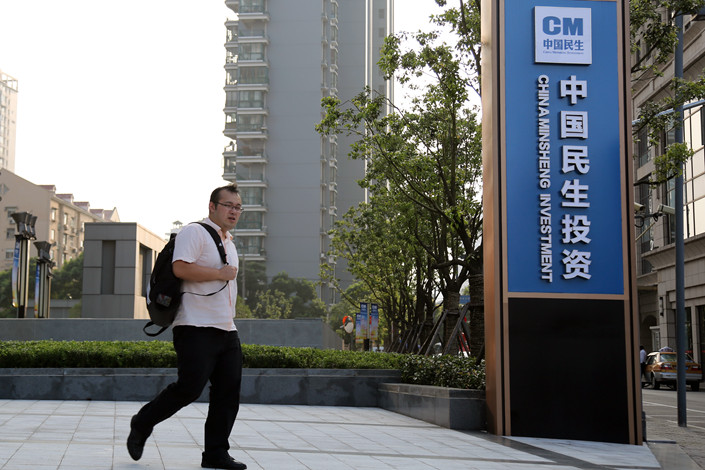 An office of China Minsheng Investment in Shanghai. Photo: IC

* CMIG has an estimated 233 billion yuan in debt, and some of its creditors recently won a court order to freeze assets valued at 13.2 billion yuan

(Beijng) — Private investment conglomerate China Minsheng Investment Group Corp. Ltd. (CMIG) has broken it silence over its liquidity crunch, saying it has started to sell off assets as its ambitious credit-fueled expansion strategy unravels amid an economic slowdown and a government crackdown on leverage.

In its first public comment since failing to repay a 3 billion yuan ($442 million) private placement note (PPN) on Jan. 29, the Shanghai-based company issued a statement on Thursday in an attempt to defuse growing concerns about its viability. CMIG, whose activities include solar power, aviation, real estate and finance, has an estimated 233 billion yuan of total debt and some creditors recently won a court order to freeze some of its assets — stakes in two companies valued at a combined 13.2 billion yuan.

Acknowledging liquidity and operational problems, CMIG said it was undergoing a “strategic transformation” and was in the process of selling assets that were “no longer considered suitable for the company’s strategic direction,” including its share of two high-quality land parcels in Shanghai known as the Dongjiadu project, believed to be one of its most valuable assets.

Sources close to the matter told Caixin that CMIG’s stake in Dongjiadu was sold to Greenland Holdings Corp. Ltd., a major Chinese property developer, for about 12 billion yuan, lower than CMIG’s previous expectation of 15 billion yuan. The first payment of 5.2 billion yuan was made to CMIG on Wednesday and it transferred funds later that day to a bond settlement platform for the repayment of the PPN.

“Asset disposals and change of control can lift sentiment and meet funding needs in the short term for companies facing a liquidity crunch, but these kinds of actions also have their downsides,” said Ivan Chung, head of Greater China credit research and analysis at Moody’s Investors Service. “Companies can lose assets that could generate future profits and are likely to be at a disadvantage because the potential buyers know that the selling companies are desperate to raise cash.”

CMIG’s statement included a lengthy question and answer session with its president, Lü Benxian, who addressed the company’s debt situation, the reasons for its current difficulties and its plans to resolve them, and its future plans which will involve asset disposals, a shift in strategy and bringing in new investors.

Lü attributed the company’s problems to overly rapid expansion, during which the company’s assets surged to more than 300 billion yuan from 30 billion yuan in less than five years, turmoil in financial markets, and the “complicated and ever-changing economic situation and the relatively difficult private enterprise financing environment.”

“We are in the process of talking to domestic and global strategic investors, and will make important progress in the near future,” Lü said, adding that that the company has 80 billion yuan of net assets to cover its debt and interest payments.

The statement follows the appointment, announced earlier this week, of nonexecutive director Yang Xiaoping as co-chairman of the company. Yang is vice chairman of Thai conglomerate Charoen Pokphand Group Co. Ltd. (CP Group), which has extensive business operations in China. The privately owned group was one of the first foreign investors in China and operates around 200 businesses on the mainland.

CP Group is one of several large investment groups being targeted by CMIG as potential investors in the company, people familiar with the matter told told Caixin.

Concerns about CMIG’s finances and its ability to repay its borrowings have been growing since it delayed repayment of its PPN. Some of the company’s bonds traded on the Shanghai stock exchange fell sharply as investors became more jittery about its prospects.

CMIG has a further 10 outstanding bond issues worth more than 14 billion yuan in total maturing this year, with the first, a 1 billion yuan security, due on March 24, data from Hithink RoyalFlush Info show.

Some creditors are already trying to get their money back through the courts. The Shanghai Financial Court, a specialized court set up last year to handle financial cases, issued statements on Feb. 1, saying it had frozen CMIG’s stake in China Minsheng Jiaye Investment Co. Ltd. valued at 8.33 billion yuan, as well as its holding in China Minsheng Bund Real Estate Development Co. Ltd. worth 4.9 billion yuan, for three years. The statements did not disclose who had applied for the assets to be frozen or why.

But the court has since rescinded the order to freeze CMIG’s stake in Minsheng Bund Real Estate, the subsidiary which owned the Dongjiadu project.

Indications of problems at CMIG surfaced in October when Dong Wenbiao, a former banker who started the company in 2014, formally resigned as chairman and four vice presidents were moved to other roles, including Zhang Sheng, who was previously in charge of financial investment.

President Li Huaizhen took over as chairman and Lü Benxian, who joined the company in November 2016 from Bank of Communications and was chairman of several CMIC investment subsidiaries, became president in charge of daily operations.

Dong’s ouster came four years after he set up CMIG following his departure as president of China Minsheng Banking Corp. Ltd., one of the country’s biggest joint-stock commercial banks. The lender is not a shareholder in the company, but provided loans and other financial services for CMIG during Dong’s tenure.

Other top executives from the bank joined him, including Lu Zhiqiang, who was vice chairman at the bank, and Shi Yuzhu, a director. Dong brought together 59 privately owned Chinese companies as shareholders who between them contributed 50 billion yuan in registered capital. Shareholders include Beijing-based Tianan Life Insurance Co. Ltd. of China, Shanghai-based Zhongtai Trust Co. Ltd., and Shandong Dongyue Chemical Co. Ltd.

With massive financial resources at its disposal and a lofty vision to “drive sustainable economic transformation and upgrading by taking the lead on private investment,” CMIG rushed headlong into a debt-fueled expansion. It initially focused on four sectors — finance, steel, solar energy and shipping. It later added four more sectors — aviation, renewable energy, real estate, and financial investment — and then jumped on the bandwagon of the government’s rural revitalization strategy.

Rapid and chaotic expansion reflected Dong’s “recklessness,” a CMIG shareholder who declined to be identified told Caixin. In the absence of proper management, the three sectors where the group was most heavily invested — solar energy, real estate, and financial investment — all suffered losses.

On top of that, a complicated web of internal investment subsidiaries, often competing against each other, grew into a major management headache, he said. “The last few years were just crazy,” he said.

CMIG was overly ambitious. In 2014, it announced a planned investment of 15 billion yuan to build a photovoltaic power station with 2 gigawatts of capacity in the northwest region of Ningxia, making it one of the largest such plants in the world. But a lack of funding forced it to scale back the project to a smaller 380-megawatt solar plant involving investment of 3 billion yuan, according to public announcements and sources within CMIG familiar with the sector.

In the property sector, CMIG and a subsidiary paid 24.9 billion yuan for a 95% stake in the Dongjiadu project and spent a further 47.9 billion yuan to develop it. But the company’s deepening liquidity crisis forced it to sell almost half of its stake to Anxin Trust Co. Ltd. Anxin set up a trust product that raised 24 billion yuan to purchase the stake and fund the project construction. The remaining stake has now been sold to Greenland.

CMIG also got burned in the financial markets, sources close to the company told Caixin. Starting in 2014, it built up a large exposure to companies listed in Shanghai and Hong Kong, spending about 3 billion yuan buying shares through private placements, exchange filings show. But it racked up huge losses in the meltdown in mainland stock markets in mid-2015, and from making bad bets on some of the Hong Kong-listed companies it invested in.

The group’s expansion was heavily dependent on short-term loans from banks and on bond sales. Its debt topped 170 billion yuan at the end of 2017, but by the end of September 2018, its liabilities had surged a further 36% to 233 billion yuan, according to Hithink RoyalFlush Info.

CMIG’s debt-driven business model started to unravel when regulators began to put the squeeze on the financial sector in 2017 as part of the government’s strategy to control financial risks and rein in leverage. Liquidity in financial markets was harder to come by and banks became more reluctant to lend, making it difficult for CMIG to refinance its borrowing. The group noted in a prospectus for a short-term bond sale in July that two-thirds of the funds would be used to pay down a maturing bond, with the remainder repaying loans from financial institutions.

The Shanghai municipal government has intervened behind the scenes to coordinate efforts to resolve CMIG’s liquidity problems, sources with knowledge of the matter told Caixin. That’s hardly a surprise given the company’s connections, the size of its debts and the broad span of its operations and investments. Lü said in the statement the company had paid more than 10 billion yuan in taxes since its establishment and its operations provided jobs for nearly 400,000 people.