Ken Fisher: Why a Grayer China Is Cause for Stock Market Optimism 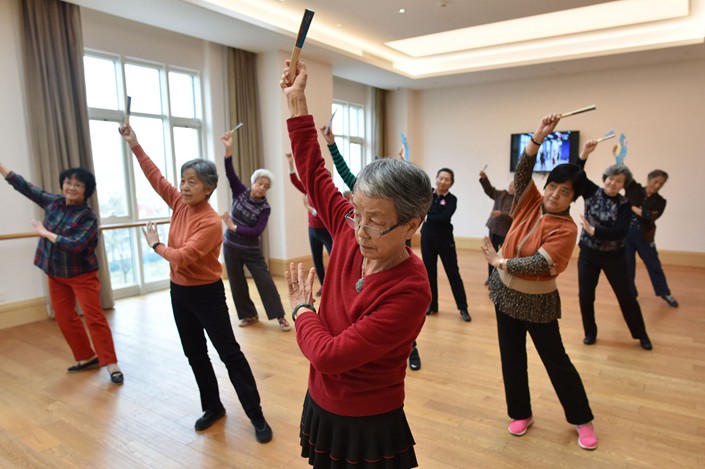 Residents of a Beijing community for the elderly take a dance class on Dec. 5. Photo: VCG

As the Year of the Pig dawns, many investors in and outside China remain spooked by the CSI 300’s 2018 bear market. They continue fretting over tiny tariffs. Others fear the continued growth slowdown. Another fear seems to be growing: China’s graying population and low birthrate — implying too few future workers for economic and CSI 300 growth. This fear is wrong. Demographic issues won’t threaten China’s economy or stocks.

The fear seems to stem from the National Bureau of Statistics’ late-January release of 2018 data. This revealed annual Chinese births of 15.23 million — fully 2 million less than 2017. The birth rate, 10.94 babies per 1,000 citizens, is the lowest in over 50 years and continues a long downtrend. 18% of Chinese are already over age 60, with most projecting that share to rise. Many argue slow births and more aged citizens means China’s population will start shrinking as soon as 2027. And all this comes two years after the government loosened the one-child rule in 2016 — spurring fears the shift failed to stop the slowdown. Papers worldwide warn of a coming Chinese demographic crisis, drawing parallels to Japan’s two-decade-long economic stagnation. Who will drive the economy — and stocks?

This fear is faulty. Stocks look forward at expected economic and political drivers, but typically not more than 30 months. Beyond that approximate timeframe, it gets fuzzy and unknowable. Too much changes. You are dealing with possibilities which are literally endless. Capital markets always move on probabilities turning eventually into realities. Hence, long-term population trends aren’t reason to be bearish (or bullish) today.

That doesn’t stop headlines from warning that demographics will lead to weaker growth. These aren’t exclusively Chinese concerns, either. Experts from Japan to Germany to the US share anxiety over similar issues.

But none of these demographic questions come to a head in the next 30 months, making them non-factors for markets. Even if the projections are right and the population starts shrinking after 2027, the bright media spotlight on this means stocks will be well aware. Probably already are. Demographic changes are slow-moving and widely watched. Markets move on surprise. So even if China’s long-term population trends follow today’s projections perfectly, it won’t shock markets. Stocks, bonds and currency will pre-price it and move on.

Then again, today’s long-term forecasts — dire or benign — aren’t foolproof. Most rely on guesswork and straight-line math extrapolating the present into the future. Yet when does the future look exactly like the past? History holds unexpected twists and turns. So will the future. While the first few years after China relaxed the one-child policy haven’t seen births boom, that doesn’t mean they won’t pick up. Society may just be adapting more slowly than policymakers first thought.

Moreover, slower population growth and a graying workforce don’t doom economic growth. Thanks to healthcare and technological advances, people are enjoying longer, more fulfilling lives. In 1981, the average newborn Chinese could expect to live to 67.8 years of age. In 2015 that figure was 76.3. Longer lives and better medical treatment mean more healthy years a person can work. This is doubly true in China, where decades of fast economic development give citizens more money to access health care products that improve wellbeing. According to World Bank data, two-thirds of Chinese lived in extreme poverty in 1990. In 2015, that figure was 0.7% — perhaps the most astounding feature of China’s nearly three-decade growth miracle.

The nature of work has changed, too, and will continue to, further enabling workers to contribute longer. The government’s shift from a manufacturing and infrastructure-development growth model to a services-based economy means lots of jobs are less physically demanding. So older, healthier workers may work longer — not from necessity, but choice. That may also be good for productivity! The service sector contains many jobs using workers’ minds, not brute strength. The accumulated knowledge of “grayer” workers can prove invaluable in driving growth, innovation and future opportunity. Pessimists just don’t choose to see that possible outcome.

Tomorrow’s technology also won’t look like today’s. How will progress in artificial intelligence and automation change the work we do? What jobs will robots do in the future that they aren’t today? Automation enabling firms to produce more with less is generally good for earnings! That is another reason to own stocks for the long haul instead of being fearful.

So set aside long-range pessimism about economic trends. Look, instead, at the next three to 30 months. Over that span I expect continued 6% average growth in China against a backdrop of “hard landing” and tariff fears, augmented by this alleged depopulation bomb. That dour sentiment is fuel for rising stocks, as folks awaken to the brighter reality around them and get more cheery. Be a rational optimist and buy the CSI now.