Photo Essay: The ‘As Seen on Livestream’ Life Ain’t What It Used to Be

By Liang Yingfei and Dave Yin 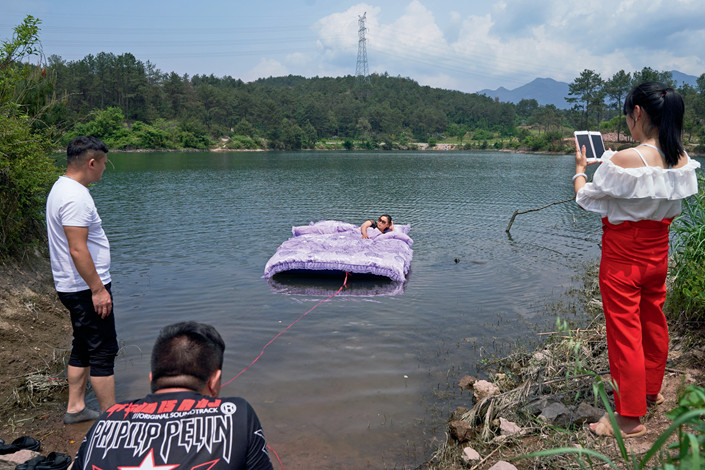 Employees of a bedding shop film an air mattress floating on a reservoir near Yiwu, Zhejiang province. As “live e-commerce” took off, it became harder to attract viewers, and vendors have had to resort to all sorts of gimmicks. Photo: Liang Yingfei/Caixin

About a 10 minute drive from the famed wholesale market city of Yiwu, East China’s Zhejiang province, in a small, stifling room, a livestreamer by the name of Alun faces three smartphones in the midst of a broadcast.

On the day Caixin’s reporter visited, he was trying to sell woks. Strewn about him, just out of sight of the cameras, were various props and ingredients — sugar, chili peppers, popcorn. Alun seemed to be giving it all to try and get viewers to stick around; he was drenched in sweat. His coach and supplier Ye Zhichun was to the side and seemingly pleased with the show. Some 30 people were selling Ye’s woks in this manner.

Back in 2008, Ye was tending street stalls in Northwest China’s Gansu province, selling cheap windup toys. He would never try to make a sale too quickly, making the time to chat with his customers.

Ye brought this habit with him when he started streaming. But now, he faced smartphones, and sometimes had hundreds of people watching at any given time. Every move he made was amplified. There was little room for error. He also found his imagination mattered much more: he had to address a customer’s needs while being on the other side of a screen.

The rise of Kuaishou and other livestreaming platforms has brought a surge in the number of people selling wares over the web — performing live informercials — along with others looking for product suppliers or associates. With its concentration of street stalls, Beixiazhu village near Yiwu became a gathering place for livestreaming vendors.

In the evening, when most people around the country have finished work for the day, streamers are everywhere to be found in Beixiazhu. Either they’ve created a small set for their broadcast, like Ye and his partner, or they stream right in a warehouse with piles of stock as the backdrop, showing viewers there’s ample supply.

A fruit wholesaler in the village that’s managed to garner an online following has plastic durians all over the walls and shines warm lighting onto a plastic tree on its premises. Its streamer was gesturing at several cameras to show the size of its mangoes.

Between 7:30 p.m. and 8:30 p.m. every night, around 20 cameras in the store stream simultaneously. Every time a sale is made, an announcement follows. “No. 3 has an order!” “No. 7 got an order!” The atmosphere is buzzing. The speed at which orders come in seems to keep pace with the speed at which its salespeople talk, almost like a celebration of consumption; a party. After the session, the company received 80 orders of fruit totaling 200 kilograms (440.93 pounds).

Company chief He Jun, says that after streaming took off, the company cut its physical stores from 70 down to 10 locations. Associates now sell using their smartphones. The stores are in their hands.

While the cost of entrepreneurship has fallen, vendors face new challenges, namely how to make their sales attempts more persuasive and entertaining. It’s even spawned something akin to a coaching business.

Nie Kai, who worked as a wholesaler in Yiwu for about two years, said he was no longer happy with just selling things for other people, and decided to start up a media production company with friends. Now they recruit students from all over the country to help them create sketches for their feeds and to try and impart upon them what it is to be a streamer. During the process they built booths in their warehouse, each with an unique interiors. Every night, students take to these booths to promote the company’s business model or to demonstrate products.

To get attention, streamers tend to dress up as though they are wealthy and repeat simple entrepreneurial catchphrases. Many videos have backdrops featuring luxury cars or upscale offices. Nie’s company has a whole assortment of items which aim to embody wealth — elegant plastic plants, peacocks, giant redwood coffee tables. Students simply have to place themselves in the setting, speak confidently and look the part.

Filming in front of a high-end car was popular, but only for a while. A streamer recalled that once, about 30 people had gathered in front of three luxury cars they’d found, taking turns broadcasting. Some didn’t get their turn until it was dark. But over time, as word got out to viewers that the vehicles didn’t actually belong to streamers, fewer streamers are using them as props.

There were other gimmicks too. Those with talents put them on display, while those without focused their efforts on humor, absurdity, or flaunting their supposed wealth. According to Kuaishou, the video platform that’s managed to gather the most streaming merchants, its algorithm doesn’t actually concentrate traffic on its top users, but rather tries to give ordinary ones an audience.

Still, many say, it’s harder than ever to attract viewers.

“Before, you could sell the same hot item for five or six days,” he says. “Now, maybe one day and it’s over.”

What’s more, due to streamers flooding into Beixiazhu, rent for a floor of commercial space has jumped from just under 30,000 yuan a year to 80,000 yuan. The cost of doing business is skyrocketing.

Even so, those pining for a share of the pie flock to Yiwu. Some are leaving behind their failed businesses and want to start fresh. Some have zero business experience but have ambitions beyond manual labor. Others still have lived through the ups and downs of e-commerce and have ended up here.

According to them, “Wherever there are viewers, there’s a Rolls-Royce.”