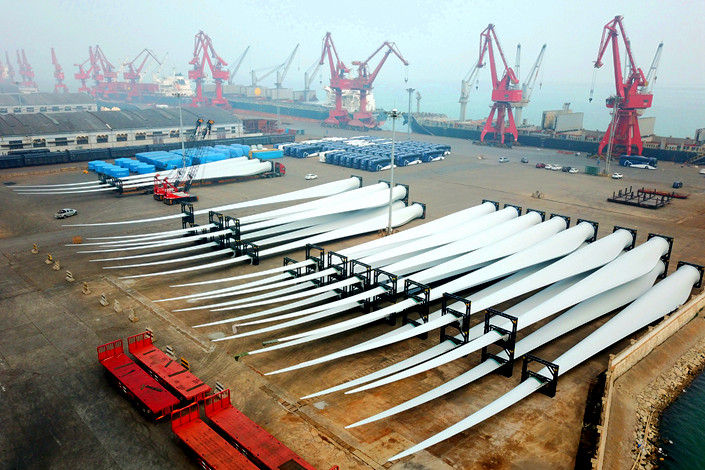 A batch of wind turbine blades wait to be exported at Lianyungang port in East China's Jiangsu province on April 12. Photo: IC Photo

China’s exports fell in April, causing its trade surplus to shrink, official data showed Wednesday, adding to concerns that the export sector would further lose momentum given the growing uncertainty about trade talks with the U.S.

Goods exports fell 2.7% year-on-year to $193.5 billion in April, down from the previous month’s 13.8% increase, according to data (link in Chinese) released by the General Administration of Customs. The figure missed the median forecast for a 3% increase in a Bloomberg survey of economists.

Imports increased 4% year-on-year to $180 billion after a 7.9% decrease in the month before, the data showed, beating Bloomberg’s median forecast for a 2.1% decline.

“Export data have been very volatile this year, due to some one-off factors including the early Chinese New Year and the VAT (value-added tax) cut in April,” economists Larry Hu and Irene Wu of consulting firm Macquarie Capital Ltd. said in a note. “But the big picture is clear: export growth has been on a broad deceleration trend since the peak in the first quarter of 2018.”

“Export growth was disappointing last month, with Trump’s latest tariff threats adding to the downside risks ahead,” Julian Evans-Pritchard, an economist with research firm Capital Economics, said in a note. “But the data on imports were more upbeat, suggesting that policy stimulus may have continued to shore up domestic demand last month.”

U.S. President Donald Trump tweeted over the weekend that he would raise additional tariffs on $200 billion worth of Chinese goods to 25% on Friday — up from the current 10%. He criticized the trade talks with China for moving “too slowly” and threatened to subject another $325 billion worth of products to a similar punitive rate.

Over the first four months of 2019, the U.S. was China’s third-largest trade partner in terms of the combined amount of imports and exports, behind the European Union and the Association of Southeast Asian Nations, according to the customs data.

Chinese Vice Premier Liu He will pay a two-day visit to the U.S for another round of trade talks starting Thursday, the Ministry of Commerce announced Tuesday.

“We are now in the endgame of the negotiations, and endgames are always very difficult,” Edward Alden, the Bernard L. Schwartz senior fellow at the Council on Foreign Relations, a U.S. think tank, told Caixin.

Zhang Qi contributed to this report.