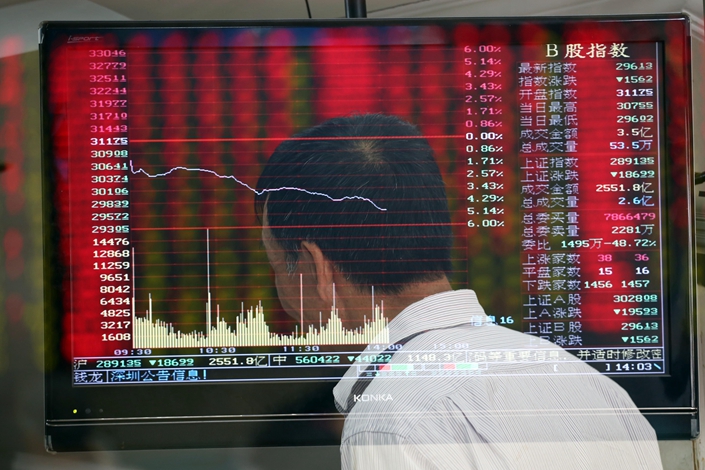 A man is seen in front of a screen displaying the prices of shares at a brokerage in Nanjing, Jiangsu province, on May 6, 2019. Photo: IC Photo

China’s stock markets experienced their biggest drop in more than three years when trading resumed Monday after a long public holiday, as investors worried about potential new U.S.-China trade tensions and also pocketed gains from a strong bull market at the start of the year.

The Shanghai Composite Index fell as much as 6.56% during the Monday session, before gaining some ground to end the day down 5.58%. The Shenzhen index, which has a heavier weighting of tech and private companies, was down as much 8.08% before closing down 7.56%. Neither index has seen such large declines since early 2016.

Monday marked the first day of trading since the May 1 Labor Day holiday that has seen mainland stock markets closed since the middle of last week. The sell-off followed U.S. President Donald Trump’s threat the previous day to raise additional tariffs on $200 billion worth of Chinese goods to 25% from the current 10% on Friday, and to subject another $325 billion worth of products that are untaxed to a similar punitive rate.

“This came as a big surprise to investors as the broad expectations until weekend were that there could be some form of a trade deal announcement coming this week, especially as Chinese Vice Premier Mr. Liu He was also expected to go to Washington for the 11th round of trade talks,” Nomura wrote in a note, adding Trump’s move might be a tactic to pressure China.

“For now, we expect volatility to rise in Chinese equities, and we will need to wait until Friday at least to get more clarity from both the Chinese and U.S. administrators to see how events unfold, and what they mean for the outlook on trade negotiations between the two camps.”

China was one of the world’s worst performing major stock markets last year, charging into bear territory in June and remaining weak for the rest of the year, partly on concerns about the ongoing U.S.-China trade war. But the markets have moved in the opposite direction this year, rising more than 20% earlier, on hopes for a trade deal and also signs of stability coming from China’s slowing economy. The Monday sell-off pulled the Shanghai Composite Index out of official bull territory. But even so, the benchmark is still up about 16.6% for the year.

“Given the solid performance of Chinese equity markets year-to-date (before today’s sell-off) … it is natural to see a knee jerk negative reaction as investors book some profits,” Nomura said.

Uncertainty in the absence of a U.S.-China trade deal is likely to keep some downward pressure on both Chinese stocks and earnings from U.S. companies, UBS said in a separate note.

“Renewed tariffs and other retaliatory measures could lead to a 5% contraction in U.S. earnings, which coupled with falling valuations could result in a 10% to 15% decline in U.S. equities,” it said. “Chinese equities could also fall between 15% and 20%.”