Q&A: S&P Global Boss Says Ratings Agency in No Hurry to Make a Profit in China

By Wang Liwei and Timmy Shen 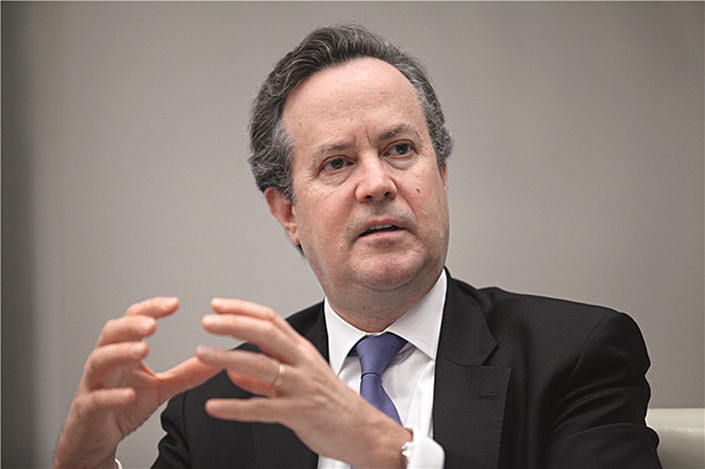 Many industry insiders are interested to see how a foreign company can help bring up the overall quality of the ratings in the Chinese credit ratings industry, which has long been criticized for providing favorable scores for local issuers and downplaying risks. Controversy also emerged as S&P adopts separate rating mechanisms and standards specially tailored for the Chinese market.

In response to such doubts, Douglas Peterson, president and CEO of New York-listed S&P Global Inc., S&P’s parent company, told Caixin in a sit-down interview that the agency is not in a hurry to earn a profit in China, but it hopes to pick up more Chinese experience along the way and to provide another voice in the local market.

China’s domestic ratings services have long been plagued by unreliability. Last year, there was a rash of corporate bond defaults, including several by issuers that had been awarded relatively high ratings by domestic rating companies.

However, the reshaping of the ratings industry is closely associated with the maturity of both the markets and the regulatory environment. “There’s no such thing as a bad bond,” Peterson said. “A bad bond is a bond that’s not priced correctly for the risk.”

The agency has also seen some early demand in China. “We have been very encouraged by the strong interest from our existing cross-border issuers in our new domestic business, and in the initial phase we will work closely with these same issuers towards ratings for their domestic Chinese debt,” S&P President John Berisford said in an earlier statement.

Foreign ratings agencies have ranked the creditworthiness of Chinese companies’ offshore bonds for years. Since 1992, S&P has provided ratings services on more than 400 Chinese issuers’ offshore bonds. Yet if they wanted to assess the quality of onshore bonds, they needed to do so through joint ventures with local firms. Fitch Ratings Inc. and Moody’s Corp., the other two well-known global players, have cooperated with local partners to conduct such business.

Caixin: Why do you have a separate rating theory in China compared to the global one?

How should investors interpret S&P’s ratings for the Chinese onshore bonds? It seems there’s no direct way to compare them with your ratings for offshore bonds in the global markets?

Within China, our ratings are going be relative to each other. We don’t feel like we will have experience for a while before we could do the mapping (that links the Chinese rating with the global one).

The Chinese bonds are only owned a little bit more than 2% by foreign investors. And we think more foreign investors will come in and they will use our ratings. They will understand what we’re doing here, and they’re not going to be so worried about direct mapping.

Chinese regulators and market participants have placed high hope on your entrance, which may force some domestic ratings agencies to strengthen their standards in compliance awareness. However, considering the race towards the bottom in China, do you see great demand among Chinese companies?

Instead of comparing ourselves to the rating agencies here, what’s more important for us is to think about whose interests we are defending. We’re defending investors’ interests to provide them with a consistent relative ranking system as well as probabilities of default in the research analytics. It would be our hope that investors are the ones that start saying “I want these bonds to be rated by S&P Ratings (China) because I want to get their opinion.”

The way we’re thinking about entering the market is that we’re going to add another voice in the market applying our global technology and experience, but using local expertise and knowledge for delivering this type of research and analytics for investors’ benefit.

As you mentioned, you’re primarily serving investors, but the payers are still issuers. How do you reconcile that misalignment?

In any of the (issuer-pay and investor-pay) models, there’s potential conflict of interest. We’ve had experience over the years and we understand that when you’re getting paid by the issuer, the first thing you do is to isolate the analysts with fire walls, so they have no incentive to get paid more on the rating.

On the flip side, if the investor pays this, that means at the time of buying and selling the bond, you have a group of people that have a significant advantage of information. You could end up with asymmetric information in the market. We’ve never thought of switching our model. Our model is that we get paid by the issuer and we control the risk with fire walls and an incentive controls.

Chinese ratings agencies are heavily competing and tend to operate at small margin. From a business perspective, how would you compete in this relatively crowded market?

Our view of competing is based off of a plan for at least three to five years. We’re not trying to enter the market to worry about our margin in the first or second year. We’re more concerned by building our voice and a base of knowledge and expertise, so that we’re able to serve the reform and the growth of the capital markets.

We believe that given the commitment from the government for reform and internationalization, this is a good time for us to come to the market. So margin and pricing are longer-term issues for us. We’re here to invest.

So, for the first three years you’re going to support Chinese business with global revenue and profits?

Any update on the collaboration with Kensho?

We’re probably using Kensho in different ways than we initially thought. Kensho’s machine-learning tools are really phenomenal at extracting and linking data much faster with a much higher level of accuracy than humans are. Kensho also allows the search of our databases using a contextual search, so it can read large amounts of data and pick out information that allows you to link things in a completely different way in search.

We also found that we can apply machine learning and data science to a lot of different things. For example, in the ratings business, there’s a large business in the U.S.’ public finance, which is municipalities, and schools and universities. It’s a large business of small-size bond issuers. With Kensho, we can now surveil that large group of clients and read hundreds of newspapers every day continuously and pick out information.

How do you think — in the future — people can live alongside technology rather than being replaced? What’s the best mode of cooperation?

In our structured finance business, machines can read so many more newspapers, news sources and public filings that a human just doesn’t have the capacity to do. But the human can still go visit somebody and look at them in the eye and understand “Do I trust that person? Do I feel like they’re going to repay their loan? Do they have integrity?” The machine can’t do that yet. The machine will be your buddy that works alongside you and learns from you along the way.

A previous version of this story misstated Douglas Peterson’s titles at S&P Global Inc. He is the company’s president and CEO.