By Shen Fan and Denise Jia 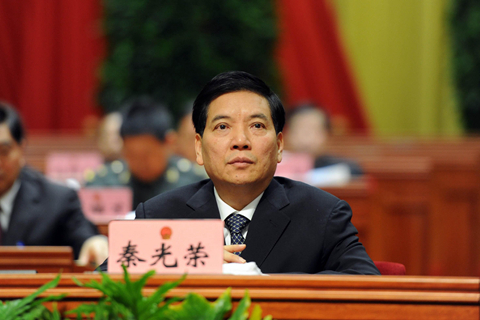 A former senior Chinese government official who is under investigation turned himself in to authorities in the central government’s sweeping anti-corruption campaign.

The investigation of the 68-year-old former provincial chief is related to that of his son Qin Ling, former chairman of Huarong Investment Stock Corp. The son was under investigation as part of the corruption scandal at the parent company China Huarong Asset Management Co. Ltd., one of the country’s four state-run bad-asset disposal companies, Caixin learned from multiple sources.

Qin Ling, Qin’s only son, was one of seven former executives of Huarong-related companies under investigation since former Huarong boss Lai Xiaomin was arrested last November on allegations of accepting bribes.

Huarong Investment said in a November statement that Qin Ling resigned as chairman of the board and as an executive director for personal reasons.

Qin Guangrong was the first provincial head-level official to voluntarily surrender to authorities. Five other senior Yunnan officials, including a former vice governor and Qin’s predecessor, have also fallen in the anti-corruption campaign since late 2012.

Qin’s predecessor, Bai Enpei, who served as Yunnan’s party chief from 2001 to 2011, was sentenced to death in 2016 with two years reprieve for taking bribes and possessing a large amount of assets that could not be accounted for.

Qin worked in the government of his home province of Hunan for more than two decades before transferring to Yunnan in 1999. Qin was made Yunnan’s governor in 2007 before being promoted in 2011 to provincial party secretary, the de facto leader of the province. He remained in that position until October 2014. In November 2014, he was appointed deputy chairman of the Committee for Internal and Judicial Affairs of the National People’s Congress.

As Yunnan’s party chief, Qin had made some comments that raised eyebrows. At a meeting in 2014, he said it’s not acceptable for government officials with clean hands not to have made any achievements.