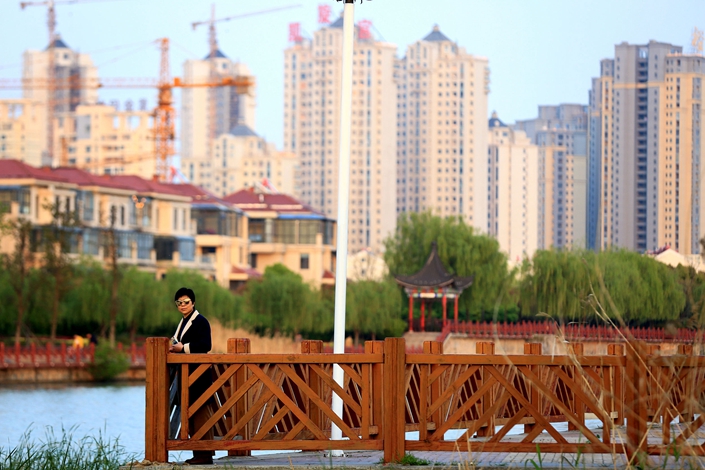 * A recent day of land auctions in the capital of Anhui province saw many plots going for 80% above the initial bid price, a sharp increase compared to similar auctions in March and a hint the real estate market is recovering

(Beijing) — On one recent day in April, 13.2 billion yuan ($1.68 billion) worth of land was sold at auction in Hefei, capital of East China’s Anhui province, with the sale prices of eight of the 13 transactions exceeding the initial bid prices by at least 80%.

The Hefei auction was notable considering that in the previous month, land auction sale prices in second-tier cities on average exceeded the initial bid prices by less than 30%, a research agency under the state-owned China Poly Group Corp. Ltd. said in April.

The scene in Hefei hints at a sharp recovery in China’s property market since March. Until that point, the market had been flashing warning signs since authorities imposed a series of tightening measures last year.

Rising land prices have the potential to drive up home prices in a market under close scrutiny by the country’s policymakers. In March, new home prices were up 4.2%, 12.2% and 11.4% year-on-year in 70 of China’s first-, second- and third-tier cities respectively, according to data released (link in Chinese) by the National Bureau of Statistics (NBS) in mid-April.

On the same day, the Ministry of Housing and Urban-Rural Development issued a warning about rapidly increasing home and land prices in some cities, China’s official Xinhua News Agency reported (link in Chinese).

The heating up of the land market this year stands in stark contrast to 2018, when 1,808 plots failed to be sold at auction — up 93.16% from a year earlier, according to data from property consulting firm Beijing Zhuge Zhaofang Information Technology Co. Ltd. The number of failed land auctions in some first-tier cities reached the highest level in nearly a decade.

In 2019, however, things changed. Several local governments in second-tier cities were selling quality land plots, which stimulated their markets and drove up land premium rates, or the percentage by which the final sale price exceeds the opening bid price at an auction. The rising land premium rates suggest property developers have regained confidence in the market, according to property consulting firm CRIC’s research in April.

Land markets rebounded in second-, third- and fourth-tier cities in March, the research agency under China Poly Group said. The average land premium rate in second-tier cities was 26%, returning to the annual average level in 2017, according to its research.

The recovery in the land market was driven by the improved financing conditions for property developers. Developers borrowed nearly 300 billion yuan in March alone, according to research by Hong Kong-based Centaline Property Agency Ltd. Their financing costs have also dropped as the cost of issuing domestic corporate bonds declined to less than 5%, and the costs of some other type of financing fell below 4%.

Developers’ financing benefited from a larger-than-usual increase in China’s total social financing (TSF), a broad measurement of credit and liquidity in the economy. In the first three months of 2019, China’s TSF grew by a net 8.18 trillion yuan, up 2.34 trillion yuan from the same period last year, according to data released (link in Chinese) by the People’s Bank of China, the central bank. In March, the TSF growth was 2.86 trillion yuan, the highest March increase since the central bank began publishing the data in 2002.

Official statistics are also showing signs of a property market recovery. The decline of new home sales by floor space nationwide in the first quarter of 2019 narrowed to 0.6% year-on-year from a 3.2% decline in the first two months, and property investment grew by 11.8%, the highest in four months, according to NBS data (link in Chinese) released on April 17.

The recovery in the housing market is the result of several factors, said Deng Haozhi, a property expert in Guangzhou. “A lot of local governments have adjusted their policies on the property market, and the central government has also loosened monetary policy,” Deng told Caixin.

At the end of 2018, China’s housing ministry reiterated that different cities can implement different policies based on their own circumstances. More developed cities like Beijing, Guangzhou, Shanghai and Shenzhen lowered the value-added tax rate and stamp duty on home purchases, while some other cities like Zhengzhou, Harbin, Hefei, Chengdu and Changsha loosened financing requirements on home purchases.

In addition to the adjustment in local policies, the average national mortgage rate for first-time homebuyers has declined for four straight months, and looks like it will drop again in April, according to data released by Jianpu Technology Inc. last month.

If the year-on-year increase of home prices exceeds 10%, it will be more likely to trigger regulatory tightening, an executive at a major Chinese property developer told Caixin.

Compared with home prices at the end of 2018, the current prices have increased only marginally, Deng told Caixin. “If home sales remain relatively high, the growth of home prices may pick up around May.”

“The relationship between the Chinese property market and broader economy is somewhat subtle,” Deng told Caixin.

When the economy is good, policymakers tend to add regulations as part of long-running efforts to revamp China’s economic structure, and when it is bad, they tend to stimulate the property market to improve the economy and boost employment, Deng said.

China’s economy grew at a rate of 6.4% year-on-year in the first three months of 2019, according to official data. At its April meeting, the Politburo referred to the situation as “better-than-expected” and “a fine opening for 2019.” However, it also warned of lingering pressure on the economy and vowed support.

Monetary policy, which is closely related to property regulations, is expected to tighten, as the central bank said in a quarterly meeting in April it would keep the money supply under control as the economy improves.

“We think the positive effect of both monetary and industrial policies will gradually disappear after the first quarter,” Kris Li, an analyst with SWS Research Co. Ltd., said in a research note.

A previous version of this story misstated the source for average land auction price in second-tier cities in March. The source was a research agency under the state-owned China Poly Group. It also incorrectly attributed the warning about rapidly increasing home and land prices to more than one government agency. The warning was issued by the Ministry of Housing and Urban-Rural Development. The previous version also misspelled the name of the property expert in Guangzhou. The expert’s name is Deng Haozhi.

This story has also been updated to clarify language about the number of plots sold at auction, the average land premium rate in second-tier cities, and the housing ministry’s statement regarding how different cities can implement their own housing policies.