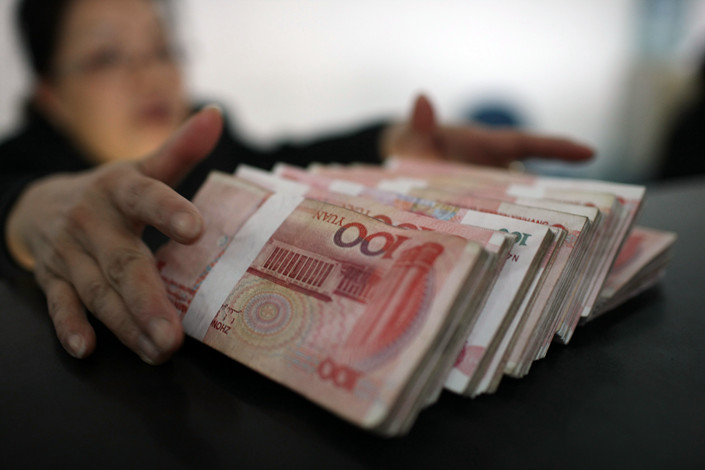 China's new loans and overall credit rose by less than analysts estimated last month, bolstering expectations that the central bank will have to further loosen monetary policy amid slowing economic growth and the risk that the trade dispute with the U.S. will intensify.

China’s total social financing (TSF), the broadest official measure of credit and liquidity in the economy, grew by a net 1.36 trillion yuan ($200 billion) in April, below analysts' expectations and less than half the 2.86 trillion yuan increase the previous month, data (link in Chinese) from the People’s Bank of China (PBOC) showed Thursday. New bank loans also missed expectations, and growth in M2, a measure of money supply, slipped slightly.

TSF is an indicator that includes bank lending and financing that exists outside the formal banking system such as stock and bond sales, and shadow banking credit such as trust loans and bankers’ acceptance bills. Seasonal factors account for some of the decrease and after a record first-quarter a slowdown in April was expected — the median forecast of analysts polled by Bloomberg was for an increase of 1.65 trillion yuan. But the figure was more than 400 billion yuan lower than the 1.78 trillion yuan increase in April 2018.

The sharper-than-expected slowdown after the surge in credit growth in the first quarter will put pressure on the central bank to ease monetary policy, especially as tensions in the U.S.-China trade war ratchet up, analysts said.

“The slowdown in credit growth last month underlines the need for further monetary policy easing in order to keep credit expanding fast enough to provide a floor to economic growth,” Julian Evans-Pritchard, an economist at research firm Capital Economics, wrote in a note after the data release. “[W]ith the current pace of credit growth still consistent with a further slowdown in economic activity, the PBOC will probably need to consider additional easing measures in order to shore up growth.”

China’s economy grew 6.6% in 2018, the weakest annual expansion since 1990. But policymakers have pledged not to open the credit floodgates to stimulate the economy despite slower investment growth and a deepening trade dispute with the U.S. that’s hit exports and confidence. Even so, the PBOC has made six cuts to banks’ reserve requirement ratios over the past 13 months to encourage lending and help smaller businesses access financing, although some of the cuts, including the latest announced on May 6, have been targeted specifically at boosting loans to small and medium-sized enterprises.

Banks handed out 1.02 trillion yuan in net new yuan-denominated loans in April, central bank data (link in Chinese) show, trailing analysts’ forecasts of 1.2 trillion yuan and down from 1.69 trillion yuan in March and 1.18 trillion yuan a year earlier. Growth in outstanding M2, a broader measure of the money supply that covers all cash in circulation plus deposits, slipped to 8.5% year-on-year at the end of April from an 8.6% pace a month earlier.

The recent escalation in U.S.-China trade tensions, which on Monday sparked the biggest daily drop on domestic stock markets since 2016, could also spur further easing measures to help bolster confidence and stabilize growth, analysts at Japanese investment bank Nomura wrote in a note. Citing a lack of progress in negotiations to secure a trade deal, U.S. President Donald Trump said on Sunday that the additional tariffs of 10% already imposed on $200 billion of Chinese imports will rise to 25% on Friday and a further $325 billion of imports will be subject to a 25% tariff “shortly.”

Nomura analysts said they expect credit growth to rebound in May as easing measures take effect.

Analysts at Goldman Sachs said weakness in April’s credit data was likely “the result of an intentional change in policy stance toward a less supportive one” after a rebound in economic activity, inflation and the domestic equity market in the first quarter.

“The situation has changed dramatically in recent days as trade tensions have escalated again and April export growth data missed the consensus forecast significantly,” they said. The PBOC cut the reserve requirement ratio on Monday and the overnight repurchase rate in the interbank market is approaching an all-time low of below 2%, actions which should facilitate more money and credit creation in May.

Given uncertainties over the outcome of U.S.-China trade negotiations “it is likely that the loosening policy bias is here to stay in the near future,” the analysts wrote. But they cautioned that “the bottom line for policymakers, in our view, is still ‘do whatever it takes’ to maintain stability but no more than that.”