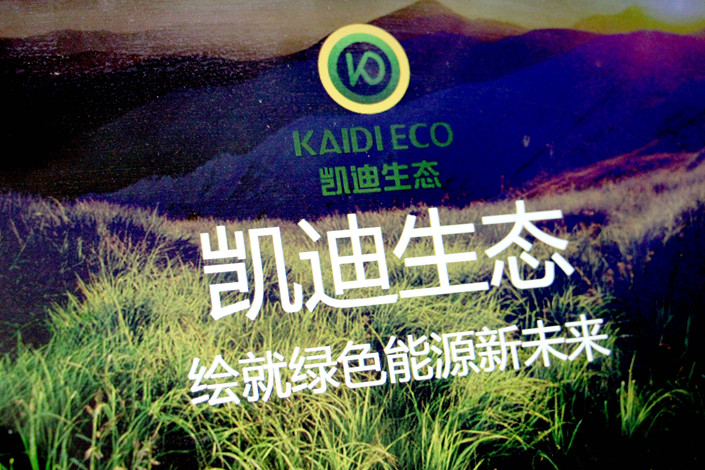 The woes of debt-ridden Kaidi Ecological and Environmental Technology Co. Ltd. deepened this week as the Shenzhen Stock Exchange announced that the listing of three of its bonds will be suspended from Friday, increasing the likelihood the securities will be kicked off the market.

Trading in the bonds has been halted for more than a year, but their listings are now at risk after the company, a unit of one of China’s biggest biomass power producers, logged losses for the last two years, according to a statement (link in Chinese) released Tuesday. The company lost 4.8 billion yuan ($698.4 million) in 2018 and 5.4 billion in 2017, according to its latest annual report.x

The announcement came a day after the listing of Kaidi Ecological’s shares was suspended because the company’s auditor, for the second year running, gave a “disclaimer of opinion” on its annual report, notifying shareholders it could not give an opinion on whether the financial statements were a fair representation of the company’s financial situation. Kaidi Ecological’s shares already have Special Treatment status, a tag given to firms in financial distress or with regulatory problems.

The Wuhan, Hubei province-based firm also revealed in a statement dated April 30 that it is being investigated by the China Securities Regulatory Commission for suspected violation of information disclosure laws and rules. The watchdog last month issued an official warning and meted out fines to 13 of the company’s former senior executives, including ex-chairwoman Li Linzhi, for delaying the release of the firm’s 2017 financial report beyond the statutory deadline.

The regulatory moves underscore the growing risks to the future of the company, a subsidiary of Sunshine Kaidi New Energy Group Co. Ltd. which has links to Lai Xiaomin, the disgraced former head of state-owned bad bank China Huarong Asset Management Co. Ltd.

Kaidi Ecological sold the three bonds in 2016 to raise a combined 1.6 billion yuan ($232.8 million), but it had to pay relatively high interest rates of 6.1%, 6.7% and 7%. Trading in the bonds was suspended in March 2018, with a statement from Kaidi Ecological at the time citing “uncertainty” in unspecified “major issues.” In September that year, the company failed to pay interest due on two of the bonds citing “cashflow difficulties” and in December missed an interest payment on the third.

The company also failed to make a 698-million-yuan payment on a bond issued in 2011. By April 18, the firm had racked up 12.4 billion yuan in overdue debt, 17% more than its net assets of 10.6 billion yuan, according to its stock exchange filing (link in Chinese) last month.

Kaidi Ecological’s parent, Sunshine Kaidi, also headquartered in Wuhan, has a 29.08% holding in the listed company. It has debts of 24 billion yuan and has pledged most of its stake as collateral for loans. But those shares have been frozen by the courts following legal action by creditors, which means the brokerages that hold them cannot sell them. In September, Sunshine Kaidi put forward a restructuring proposal, which included a plan to swap 9 billion yuan of debt into equity and getting a cash injection of 7 billion yuan.

When it announced the listing suspension of its bonds, Kaidi Ecological said it aims to return to profit this year by taking measures including “actively pushing forward restructuring work to defuse the debt crisis with the backing of the government and other parties.”

Many local governments have offered support, including capital injections, to listed companies to tide them over their financial difficulties as part of last year’s stock market rescue campaign. But the Hubei and Wuhan governments have given little public indication that they will help Kaidi Ecological, whose fortunes are closely tied to Sunshine Kaidi and whose links with China Huarong Asset Management haven’t helped its cause.

Huarong has a 2.81% stake in Kaidi Ecological, according to its 2018 annual report, and was a shareholder in Sunshine Kaidi. Its chairman, Lai, was put under investigation in April last year for “serious violations of discipline,” a euphemism for corruption, before being formally arrested in November on a range of charges including embezzlement of public assets.