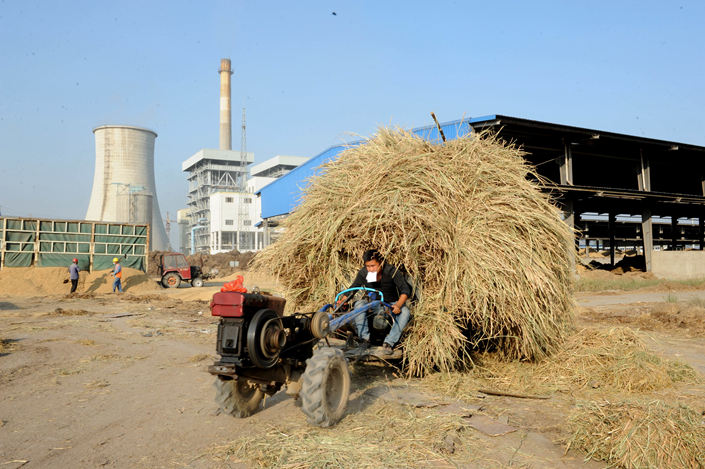 The crisis threatening the survival of one of China’s biggest biomass power producers looks set to deepen as the listed unit of debt-ridden Sunshine Kaidi New Energy Group Co. Ltd. faces the possibility of defaulting on yet another bond, and the chances of help from local governments as part of the stock market rescue strategy grow dimmer.

After months of turmoil and a string of failed restructuring efforts, investors are increasingly doubting that Sunshine Kaidi is just another victim of an overly ambitious debt-fueled expansion in a segment of the clean energy industry that failed to get support at the highest level of government. Instead, they fear the company is an elaborate fraud engineered by the company and its chairman Chen Yilong, who jumped on the bandwagon of green power and poverty alleviation and took advantage of lax regulation.

“While some private companies act with responsibility toward the government, localities, investors and workers, others are busy deceiving, bringing calamity and misfortune to localities investors, workers and farmers while all the time spouting beautiful slogans (about poverty alleviation and green energy),” one small investor wrote on in a section of an online stock market bulletin board dedicated to Sunshine Kaidi’s listed subsidiary, Kaidi Ecological and Environmental Technology Co. Ltd.

The Shenzhen-listed company failed to repay a 1.18 billion yuan ($170 million) seven-year bond due Nov. 21, citing “financing difficulties,” and on Dec. 15 it may have to stump up as much as 600 million yuan to make an early repayment on a three-year bond. The debt, which was issued in December 2016 and carries a 7% interest rate, has a put option that gives holders the right to sell the bonds back to the company at the end of the second year.

Kaidi Ecological, based in Wuhan, the capital of Central China’s Hubei province, is also facing pressure from the Shenzhen Stock Exchange. The regulator threatened the company with delisting in July after its auditor refused to sign off on its annual report and accounts, which were filed two months late.

The report showed the company swung to a 2.38 billion yuan loss last year from a 333.5 million yuan profit in 2016, a collapse management blamed on a massive debt-fueled buying spree starting in 2015 that involved the purchase of 154 companies from its parent for 6.85 billion yuan — acquisitions that Kaidi Ecological admitted in the report are now the subject of a police investigation. Although biomass power generation seemed like a good bet and politically sound given the government’s commitment to developing clean energy, the high costs and lack of top-down policy support, as well as insufficient incentives and tax breaks held back its development.

The stock exchange has also censured Kaidi Ecological for failing to disclose sufficient information about its borrowing, how it intends to resolve its debt crisis, and its relationship with Sunshine Kaidi, which holds a 29.08% stake. Businessman Chen Yilong, who took back the chairmanship of the listed company in August, is also the controlling shareholder of Sunshine Kaidi.

The company is stalling on providing answers to questions posed by the exchange in July over the true ownership of subsidiaries and factories that Kaidi Ecological claims belong to the company, and over lack of disclosure about its debt situation, which the regulator raised in October. Management, which has already missed several self-imposed deadlines for replying, was due to give a response by Nov. 30, but in a statement that day said it would now provide answers by Dec. 7. “As the questions are complicated and the fact checking needs time, Kaidi Ecological has requested to the Shenzhen Stock Exchange to postpone the deadline for replying,” the company said in its Nov. 30 statement.

Kaidi Ecological’s shares have collapsed from 4.99 yuan to 1.18 yuan since they resumed trading in July after an eight-month suspension requested pending a major asset restructuring by Sunshine Kaidi that failed to materialize.

Delisting is becoming increasingly likely for Kaidi Ecological, which has Special Treatment (ST) status, a tag given to firms in financial distress or with regulatory problems. They are dangerously close to their par value of 1 yuan; any stock that closes below its par value for 20 consecutive days could trigger a delisting, according to stock exchange rules. New regulations issued on Nov. 16 stipulate that companies will be delisted for engaging in a range of activities including fraud and violating disclosure requirements.

Although many local governments have offered cash support to listed companies to tide them over their financial difficulties as part of the stock market rescue campaign, the Hubei province and Wuhan city governments have given no public indication that they will help Kaidi Ecological, whose fortunes are closely tied to its parent, Sunshine Kaidi, a company with links to Lai Xiaomin.

Lai, the former head of Huarong Asset Management Co. Ltd., one of the country’s big four state-owned bad banks, was placed under investigation in April for “serious violations of discipline,” a euphemism for corruption. He was formally arrested in November on a range of charges including embezzlement of public assets. Huarong has a 2.81% stake in Kaidi Ecological, according to its 2017 annual report, and was a shareholder in Sunshine Kaidi, although Huarong’s directors left the board of the parent company in September, according to a government database of company information.

Chinese media have reported that the Hubei and Wuhan governments, along with the banking and securities regulator, and representatives from the central bank, set up a creditor group for Sunshine Kaidi in June after Kaidi Ecological failed to make a 698 million yuan payment on a bond. The group was chaired by the Export-Import Bank of China and among the participants were six other banks, sources with knowledge of the meeting told Caixin.

Financial institutions were told not to withdraw lending or file lawsuits against Sunshine Kaidi, which has debts of 24 billion yuan and has pledged 98% of its stake in Kaidi Ecological as collateral for loans. Those shares have been frozen by the courts following legal action by creditors, which means the brokerages that hold them cannot sell them.

In September, Sunshine Kaidi put forward a restructuring proposal and held a meeting at its headquarters in Wuhan for creditors. Part of the plan involved swapping 9 billion yuan of debt to equity and getting a cash injection of 7 billion yuan.

“This plan came out of nowhere, it was just an idea,” said one investor with knowledge of the restructuring who declined to be identified. “There was no data to back it up, no market analysis, no financial analysis and no due diligence. It just came up with a result.”

While its strategy was unconvincing, investors were forced to swallow it, fearing that pushing the company into bankruptcy would cause even more pain. Sunshine Kaidi claimed it had 8,000 employees and had signed contracts with tens of thousands of poor farmers to buy their surplus straw and wood for its biomass plants, as part of the central government’s poverty alleviation program, all of which would be put in jeopardy by bankruptcy.

“This company is holding the local government and bond investors hostage,’’ said one person familiar with the matter. “It’s totally opportunistic — trying to take the moral high ground (with its emphasis on poverty alleviation) while also trying to avoid its debt payments.”

Calls to the Wuhan CBIRC and the Municipal Bureau of Financial Affairs and went unanswered. The press office of the Hubei State-owned Assets and Administration Commission, which usually leads local rescue efforts, told Caixin it had no information about any plans for assistance and referred the matter to the province’s Department of Economy and Information Technology. When asked about any potential rescue plan for Kaidi Ecological, the spokesperson, who declined to be identified, said: “Why is it the government’s responsibility to solve the debt problems of private companies,” and referred Caixin’s reporter to a Nov. 21 statement on its website pledging to help the private sector through channels such as taxation, financing, business environment and supportive policies.

No one picked up the phone at the head offices of Kaidi Ecological or Sunshine Kaidi, and Caixin’s efforts to contact Chen Yilong have been unsuccessful.

The chances of Sunshine Kaidi and Kaidi Ecological surviving look slim, given their poor regulatory track record, the string of investigations that are piling up and their association with Huarong. Lai stated publicly in 2015 that the asset management company had invested 2 billion yuan in the parent company. Huarong also provided an unknown amount of loans, and its brokerage arm, Huarong Securities Co. Ltd. set up a 500 million yuan fund with Kaidi Ecological to invest in poverty alleviation projects and support the development of green industries.

Kaidi Ecological disclosed in its 2017 annual report that the police in Wuhan have started an investigation into mergers and acquisitions between the company and its parent going back to 2015.

Sunshine Kaidi is being probed by the Hubei branch of the China Securities Regulatory Commission for information disclosure violations, and in September the company was found to have misused 1.05 billion yuan of funds from its listed unit.

“This company’s credibility has become a joke, and it’s sullied the reputation of the A-share market as a whole,” one small investor wrote on the online bulletin board. “It’s also exposed the ineffectiveness of the financial regulators.”