By Wang Luyao and Isabelle Li 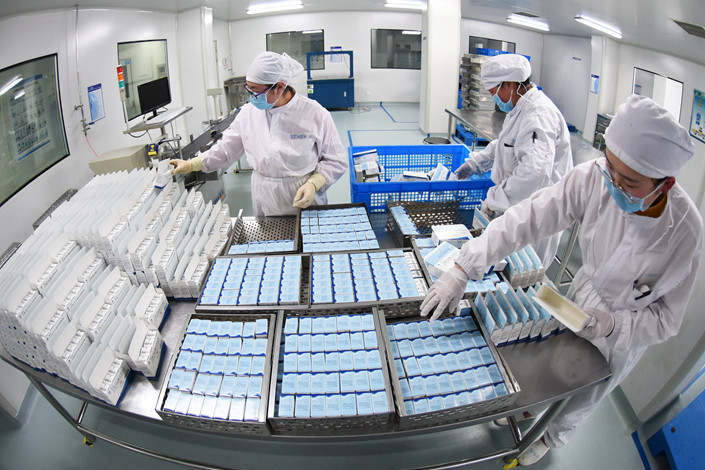 Workers package anti-tumor drugs at a pharmaceutical company in the eastern city of Lianyungang on March 13. Photo: IC Photo

China’s latest move in the trade war will have little impact on the cost of medical treatment, as many medical products affected by the latest tariff hike for U.S. imports have domestic alternatives, analysts from a medical investor told Caixin.

On May 13, three days after Washington moved to increase duties on $200 billion of Chinese imports, Beijing struck back by raising tariffs on about 4,545 U.S. product lines worth $60 billion annually, starting June 1.

The new tranche of levies will place a surcharge of 5% to 25% on nearly 100 medical items, including drugs and medical instruments, causing concerns on the security of supplies and price fluctuations.

According to the Tariff Policy Committee of the State Council, most of pharmaceutical products on the list are used to produce drugs — such as active pharmaceutical ingredients, which are the components of drugs that provide effects — rather than the finished products actually consumed by patients.

Some widely used pharmaceuticals, including insulin and other protein hormones, will be subject to a 25% increase on top of the previous tax rate of 4%. There is huge demand in China for insulin, as an estimated one in 10 Chinese people live with diabetes.

However, of the major exporters of insulin to China, only one firm is based in the U.S., according to analysts at Haoyue Capital, a Chinese investor in the health care industry. That firm, Eli Lilly and Co., has a market share of between 10% to 15%, so the increased levy would at most have a minor impact on this area, an industry expert said.

Haoyue Capital said that the market for other widely used protein hormones besides insulin is dominated by a handful of domestic companies, and therefore import taxes will have little effect on prices.

Several generic drugs, such as carbamazepine, which is used to treat seizures and nerve pain, are also on the new tariff list, but market watchers from Haoyue Capital told Caixin “generic drugs on the tariff increase list have mostly found domestic alternatives for the imports.”

Mid-range and lower-end medical equipment and consumables, such as syringes and thermometers, will be subject to tariff increases ranging from 10% to 25%. Alternatives are easily acquired for these items, Haoyue Capital analysts said.

High-end equipment such as ultrasound and MRI machines and their components will be subject to additional tariffs at a rate of 5%. Haoyue Capital analysts said that hospitals are also not sensitive to price when it comes to these kinds of big-ticket items.

Both China and the U.S. appear to have been fairly cautious when taxing medical products.

The United States Trade Representative did not place active pharmaceutical ingredients on its May 10 tariff list. This is because there are no good substitutes for Chinese-made ingredients in the short term, Haoyue analysts said.