Tencent-Backed WeBank Has No Listing Plans, Despite Being Approached for IPO 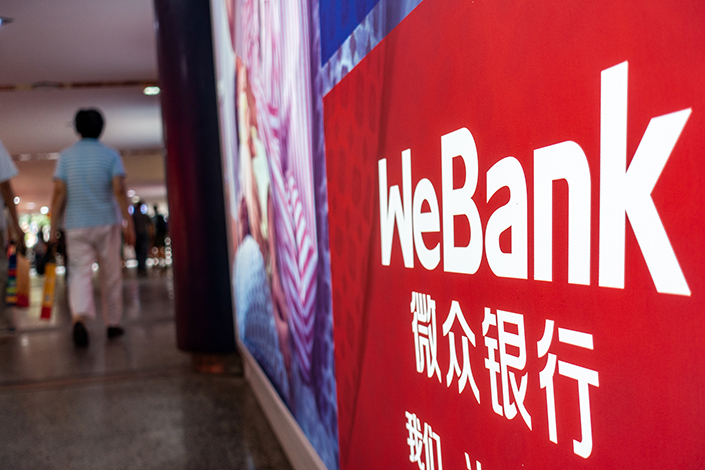 A WeBank advertisement in Shanghai on Sept. 21. Photo: VCG

(Hong Kong) — WeBank, the online-only bank backed by internet giant Tencent, has yet to see any uptick in its bad loan ratio despite China’s slowing economy, but is prepared to let the amount rise as much as four times its recent level as it continues its rapid expansion, its chief information officer told Caixin.

The 4-year-old bank also believes it meets requirements for a public listing, partly due to its status as a profitable, fully-licensed financial technology company, CIO Henry Ma told Caixin in a Monday interview on the sidelines of the Caixin Summit Hong Kong 2019. But he was quick to add the bank has no plans for an initial public offering (IPO) at the moment, even though it has been approached about such a move.

WeBank is one of only three licensees to operate online-only banks, alongside the Alibaba-backed MYbank and Sichuan XW Bank, which is backed by smartphone-maker Xiaomi.

The trio received their licenses starting in late 2014 as part of a broader pilot program by China’s financial regulator to improve credit access to consumers and smaller private companies. Such entities typically have much more difficulty obtaining financing from the existing field of state-run banks that specialize in larger, collateralized loans to other state-run enterprises.

Through its brief operating history, WeBank has been able to keep its average nonperforming loan (NPL) ratio at a relatively modest level of between 0.3% and 0.7% over the last three years, according its latest annual report. But the bank could be prepared to let the figure rise as high as 2%, a sharp increase over last year’s 0.51%, as it expands and experiments with new lending channels, Ma said.

By comparison, China’s big four banks now have NPL ratios of around 1.4% to 1.6%, though some believe the levels could be much higher as banks take steps to avoid classifying bad loans as delinquent. Despite concerns that NPL ratios could be rising as China’s economy slows, WeBank has yet to see any significant increases in that aspect of the business this year, Ma said.

“We’re more comfortable as long as it stays around 1%,” he said of the bank’s NPL ratio. “That’s the kind of credit performance we are expecting. We expect it to go above 1% but not too much above 1%. … Probably 1% to 2% is the kind of area we can probably manage. It’s still very stable. In the longer term we do see the potential of seeing a higher rate.”

Unlike some other online banks that buy large volumes of loans from third-party sources such as peer-to-peer (P2P) lenders, WeBank so far has focused on making most of its loans through its WeChat-based Weilidai lending service. Ma said more than 70% of the banks loans now originate from that service, which mostly targets consumers. But it is trying to diversify into other sources as well by developing channels that target other types of customers like small businesses.

The company’s lending volume reached about 120 billion yuan ($17.3 billion) last year, more than double the 48 billion yuan in 2017. Its average loan size is about 8,100 yuan, with an average lending period of around 50 days carrying interest rates that translate to anywhere between 7% and 18% on an annualized bases.

Reflecting the scale it must achieve to generate profits, Ma pointed out that 72% of WeBank’s loans now generate less than 100 yuan each in interest payments. Still, the bank is quite profitable in only its fourth year of operation. Its profit hit about 2.5 billion yuan last year, up about 70% from the previous year.

In terms of capital, the bank currently can take certain types of deposits to finance its activities, though it has far more restrictions than traditional brick-and-mortar banks. Its current deposit base totals about 150 billion yuan, enough to handle its lending needs. Ma said the bank has no fund-raising plans at the moment, but that such a move is “always an option.”

He also declined to comment on WeBank’s valuation that was put at a sizable 147 billion yuan last year, based on a legal document attached to an auction notice on Taobao.com involving an auction of a minor stake in the lender.

“If you look at the numbers … we are already qualified to go for an IPO,” he said. “Again, timing is very important. Also, again regulators’ approval is very important. We have been approached by a lot of the exchanges. We are eligible, but again it’s timing, market sentiment, regulators’ perspective. These are pretty important factors.”