By Zhang Qi and Jason Tan 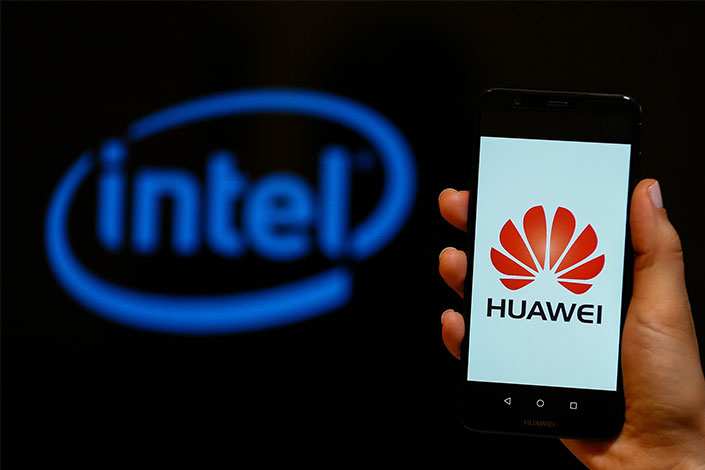 A person holds a Huawei mobile phone in front of the logo of Intel in Izmir, Turkey on May 28. Photo: VCG

Intel is pushing the U.S. government to allow it to continue supplying components to Huawei Technologies Co. Ltd., a senior executive from the American chipmaker told Caixin at a forum in Washington.

Peter Cleveland, a vice president of Intel Corp., argued in favor of discussion over regulation in dealing with the embattled Chinese telecommunications-equipment maker, which has been blacklisted by the U.S. government on national security concerns.

“It's better to try to reach mutually agreed solutions to improve cyber hygiene versus taking regulatory steps that are so dramatic and impact the American company as well as the Chinese company,” Cleveland said on the sidelines of a Chinese investment forum on Monday. Cleveland is a vice president in Intel’s legal department and also the company’s deputy general counsel for government, markets and trade.

His comments followed a Bloomberg report over the weekend that the White House’s acting budget chief, Russell Vought, had asked to postpone instituting a provision of the 2019 National Defense Authorization Act that bars any executive agency, government contractor or company receiving government loans or grants from using Huawei equipment.

Vought, who made the request in a letter to U.S. Vice President Mike Pence, warned that the law could dramatically reduce the number of companies that would be able to supply the U.S. government, therefore burdening American companies.

The Trump administration has repeatedly accused Huawei, the world’s largest maker of telecom network gear, of potentially spying for Beijing. It has been pressing allies to exclude the company from supplying equipment for their 5G networks. The administration has also blacklisted the Chinese company, cutting off the supply of American components it needs to make its smartphones and networking gear.

After the ban was imposed, companies like Google, Qualcomm Inc. and Intel severed business ties with Huawei. But the administration later offered a 90-day reprieve for companies to adjust.

Google has also joined Intel in asking White House to exempt it from the ban, the Financial Times reported last week. It said Google executives worry that the ban will force Huawei into developing its own mobile operating system that “could pose risks compromising U.S. national security.”

In Depth: How Huawei Prepared for American Sanctions

It has been reported that new Huawei phones are not able to support Google apps such as Gmail and Chrome, further dampening Huawei’s ambition to become the world’s top smartphone-maker by the end of this year. The Chinese firm said it has been developing its own mobile operating system, scheduled for launch soon.

Cleveland told Caixin that Huawei is a successful and iconic Chinese company that has grown its business all over the world, and that Intel values its partnership with the firm.

“So we tried to work with the White House and the Department of Commerce and the other agencies on an intense cooperative basis to find a right solution and give them ideas about how to work effectively with China and important companies like Huawei,” he said.

While a potential lifeline might be on the way, Huawei said it could miss its goal of becoming the world’s top smartphone-maker this year.

Shao Yang, chief strategy officer of Huawei’s consumer business, said Tuesday in Shanghai that the company “may take longer” to become the top player in the market, Reuters reported. Shao didn’t elaborate why.