By Yang Ge and Hou Qijiang 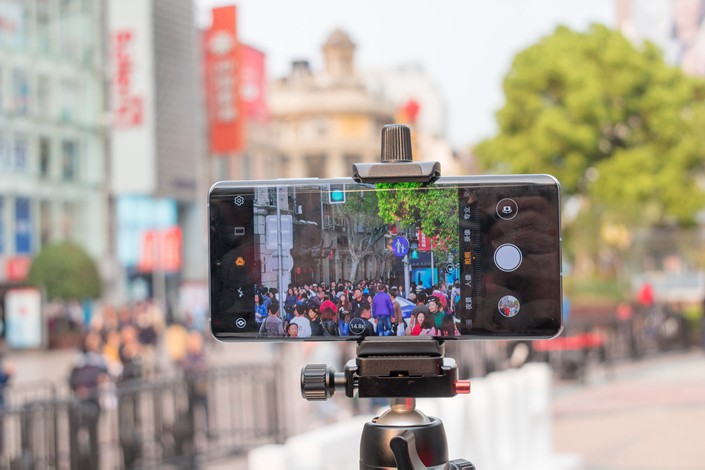 Huawei saw a 40% rise in smartphone shipments for its home China market, which accounts for about half of its sales. Photo: IC Photo

A surging Huawei Technologies overtook stumbling global tech giant Apple Inc. to become the world’s second largest smartphone-maker in the first quarter of 2019, as Apple slashed prices in China to try and stem its plunging sales in the world’s largest market.

Huawei’s impressive gains came even as the broader global smartphone market contracted 6.6% in the three months through March, with 310.8 million units sold, according to new data from IDC. After several years of explosive growth, the global smartphone market has begun contracting in recent quarters due to oversaturation, especially in China where three of the world’s top five makers are based.

As a result, Huawei moved squarely into the position as the world’s second largest smartphone-maker, while Apple fell one notch to No. 3. South Korea’s Samsung maintained its spot as the world’s top producer with a 23.1% share, down 0.4 percentage points from a year earlier. Rounding out the top five were Xiaomi in fourth with an 8% share, and Vivo and Oppo in a statistical tie at fifth with 7.5% and 7.4%, respectively, IDC said.

“It is becoming increasingly clear that Huawei is laser focused on growing its stature in the world of mobile devices, with smartphones being its lead horse,” said IDC’s Ryan Reith. “The overall smartphone market continues to be challenged in almost all areas, yet Huawei was able to grow shipments by 50%, not only signifying a clear number two in terms of market share but also closing the gap on the market leader Samsung. This new ranking of Samsung, Huawei, and Apple is very likely what we'll see when 2019 is all said and done.”

Huawei was helped in part by its near exclusion from the large U.S. market, where the company’s smartphones have been shunned over privacy concerns. By comparison, the company saw a 40% rise in shipments for its home China market, which accounts for about half of its sales, according to preliminary data from IDC. It has also performed well in its other main market in Western Europe, where it is offering smartphones across a wide range of price points.

“Huawei is targeting high to low segments,” IDC analyst Will Wong told Caixin. “Huawei’s high-end models are creating a positive ripple effect for the lower-end models while the mid- to low-end models are supporting the overall shipment performance.”

While Huawei soared, Apple was hit by weakness in both the U.S. and China. The company’s iPhone shipments plunged 40% in China during the first quarter, according to preliminary IDC data. Apple’s own data showed a 21.5% revenue decline for its Greater China sales, which includes all of its products sold in Hong Kong and Taiwan in addition to the Chinese mainland.

To counter the China slump, Apple has recently embarked on a series of price cuts for its iPhones in the market, mostly through its third-party sales partners. IDC confirmed those cuts, saying the average selling price for iPhones in China dropped by about 20% in the first three months of the year. Those and other actions have begun to yield some results, Apple CEO said on a conference call to discuss the company’s latest quarterly results.

“Our (March quarter) year-over-year revenue performance in Greater China improved relative to the December quarter, and we’ve seen a very positive customer response to the pricing actions we’ve taken in that market, our trade-in and financing programs in our retail stores, the effects of government measures to stimulate the economy, and improved trade dialogue between the United States and China,” Cook said.