By Hou Qijiang and Tang Ziyi 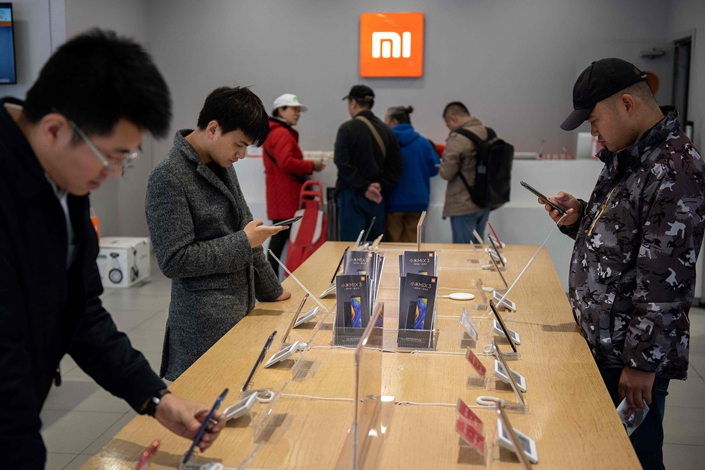 Customers check out mobile phones in a Xiaomi store on Nov. 7 in Beijing. Photo: VCG

Analysts have poured cold water on Xiaomi’s efforts to expand its offline footprint, saying the company faces various obstacles in the way of an offline sales channel that would match its rivals.

The remarks came after the smartphone-maker told Caixin on Friday that it had set up an internal committee to focus on offline sales in China, marking the latest recognition that such brick-and-mortar stores will be important to its global success.

The handset vendor is feeling the pinch after the company’s sales in China plunged 20% in the first quarter of this year, with Xiaomi taking about 12% of the market, according to data from IDC. China is Xiaomi’s largest market and also the world’s largest smartphone market.

The smartphone-maker started as an online-only handset retailer like many other businesses in China’s internet era, but it moved into physical stores in recent years to boost brand recognition and to tap less tech-savvy customers in China’s smaller cities and rural areas.

The company said in an internal letter released Wednesday that the internal committee created eight offline business departments to manage the retail market, sales channels provincial sales agencies and so on.

Xiaomi had opened 586 direct-sale stores and 1,378 franchised stores across China by the end of 2018, according to the company’s financial report. Yet its offline sales channel remains as a weak point and it lags behind domestic rivals Huawei, Oppo and Vivo, said Chen Hang, electronics industry analyst for Southwest Securities.

By comparison, Huawei Technologies Co. Ltd. said it had over 11,000 brick-and-mortar stores in China and 35,000 across the globe in 2016, when the company announced it would open 15,000 new retail stores in the world that year.

Xiaomi’s retail stores, branded as Mi Home, tout an ecosystem strategy to attract customers, providing products beyond handsets ranging from smart speakers and air purifiers to TVs. The initial investment to open such a store costs millions of yuan, and demand for its products has been weaker recently, said an industry source who asked to remain anonymous.

The source said a businessperson who operates four Mi Home stores in Central China’s Hunan province told him that all of them have reported losses so far this year, while only one was in the red in 2018.

In the meantime, sales agents are less motivated to promote Xiaomi’s smartphones due to a lower-than-average commission of 5%, as its biggest rival Huawei offers a much higher 15% commission, he said.

This is not the first time the smartphone-maker has ramped up efforts to expand its offline presence. In 2016, the company announced it would restructure a department in charge of Xiaomi’s online business into a sales and services department.