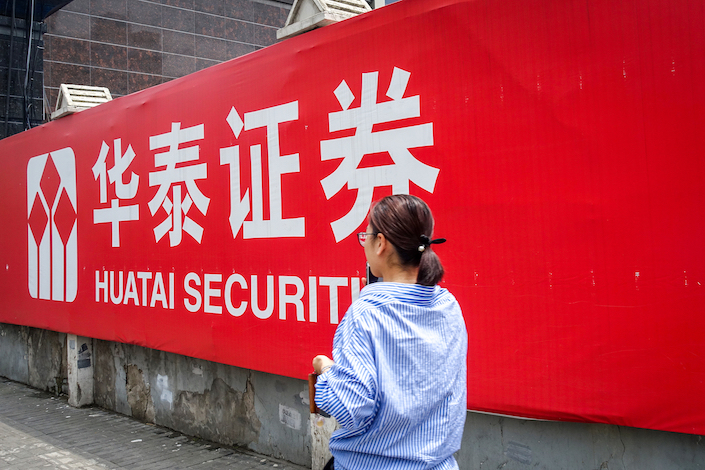 Huatai is the first company to use the Shanghai-London Stock Connect. Photo: VCG

(Bloomberg) — Chinese brokerage Huatai Securities Co. priced its U.K. offering near the bottom of its range, raising about $1.5 billion from investors before it becomes the first jointly listed London-Shanghai stock.

Huatai sold 75 million global depositary receipts, pricing them at $20.50, the company said Friday, with potentially more to come from the sale of an over-allotment. The Nanjing-based brokerage had targeted a range between $20 and $24.50.

The shares will start trading on the London Stock Exchange next week, coinciding with the start of the U.K.-China Economic and Financial Dialogue conference in the British capital. Chancellor of the Exchequer Philip Hammond will host Chinese officials including Vice Premier Hu Chunhua at the event.

Huatai is the first company to use the Shanghai-London Stock Connect, which the LSE hopes will be an Asian bridgehead for more listings after Brexit. The program had been in the works since at least 2015, when former Chancellor George Osborne visited China, but it missed the original December start date as it hadn’t received Chinese regulatory approval, according to people familiar with the situation.

Next week’s conference is also set to include Douglas Flint, the former chairman of HSBC Holdings Plc, who’s now a British envoy for China’s Belt and Road infrastructure program. HSBC has previously said it would consider a Chinese listing under the Shanghai-London link.

For the Chinese, Stock Connect is part of a “bigger blueprint to boost foreign participation and ownership in the domestic capital markets,” said Alexious Lee, head of China capital access at CLSA Ltd.

Huatai, which pitched its offering to U.K. fund managers this week as it seeks to finance expansion outside China, said the new shares account for 9% of its outstanding stock. So-called when-issued trading will start June 17, with full trading beginning June 20.