Bank of Beijing to Cover $360 Million Debt of Citic Guoan 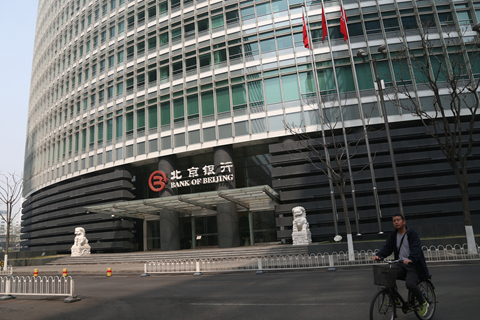 Bank of Beijing will fulfill its guarantee responsibilities for all of the principal and interest under a 2.5 billion yuan debt guarantee agreement with Citic Guoan. Photo: VCG

Chinese state-linked conglomerate Citic Guoan Group’s guarantor will pick up the tab for 2.5 billion yuan ($360 million) of the company’s debt.

Bank of Beijing will fulfill its guarantee responsibilities for all of the principal and interest under a 2.5 billion yuan debt guarantee agreement, the bank said Friday night. Troubled Citic Guoan missed a first-quarter interest payment of 39.45 million yuan on the debt in March, and Bank of Beijing Co. made the payment instead.

Bank of Beijing said the action doesn’t mean a final loss for the bank. The bank had taken a number of asset preservation measures to ensure that the book value of the assets can cover the risk, and the bank will try to safeguard its rights and interests by recovering funds from the debtor, the bank said in a statement. The move helps to lock in risk exposure and carry out recovery work to the debtor, the bank said.

But whether the guarantor can recover its loss is questionable as Citic Guoan is deeply mired in debt disputes and asset seizures. The company has been in disputes with several other financial institutions over failures to repay loan contracts. The institutions include Beijing Zhongguancun Bank Co. Ltd., Huaxin Fortune International Trust Co. Ltd. and China Guangfa Bank Co. Ltd. The company also defaulted on a 3 billion yuan bond after failing to pay a bond coupon due April 27, the Shanghai Clearing House said.

Amid rising concerns from the market and creditors, Citic Guoan has asked its former parent Citic Group for help, Caixin has learned. Citic Group reported Citic Guoan’s debt situation to the Ministry of Finance before the Lunar New Year holiday and has created a team to help negotiate a restructuring plan. Details of the plan, however, have not been disclosed.

A five-year, 2.5 billion yuan debt investment plan of Citic Guoan for which Bank of Beijing is guarantor originally was to come due in 2020, carrying an annual interest rate of 5.6%. The borrowings are being used to finance the renovations of some old buildings in the capital.

Under the accelerated expiration of the debt plan, if Citic Guoan fails to repay the bank in six months, then the entire debt investment plan will mature early on Sept. 3, with Bank of Beijing on the hook for all unpaid principal and interest. On May 27, the beneficiaries of the debt plan approved the early expiration of the plan, Bank of Beijing said in Friday’s statement.

Because of Citic Guoan’s failure to repay the bank on Thursday, Bank of Beijing decided to fulfill the guarantee responsibility for all principal and interest in accordance with the terms of the guarantee agreement, the bank said.

Citic Guoan’s net profit in the third quarter of 2018 fell 89% from a year earlier to 56.04 million yuan. At the same time, its liabilities-to-assets ratio hit 85%, with the company holding total outstanding debt of 178.3 billion yuan, according to its latest financial results.