In Depth: Is the Era of Copycat Carmakers Ending in China?

By Liu Yukun and Jason Tan 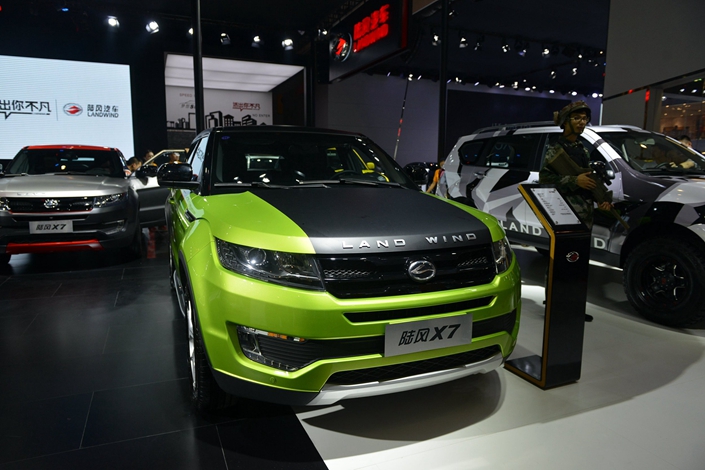 A Landwind X7 on display at an auto exhibition in Chengdu on September 2, 2016. Photo: VCG

The Chinese auto industry’s copycat problem has gained renewed attention as Honda again clashed with a Chinese rival in an intellectual property court just a few months after Jaguar won a landmark case.

While this issue has persisted for years, foreign brands have rarely taken local copycats to court. Industry observers said that this is because of both the slim chance of victory in Chinese courts and the risk of a nationalist backlash in the world’s largest auto market.

But a new example was set in March, when Britain’s Jaguar Land Rover PLC won a patent infringement case against China’s Jiangling Motors, a decision that was described by Jaguar as a “first” for international car manufacturers in the country.

Jaguar, owned by Indian conglomerate Tata Group, claimed that Jiangling copied its Evoque with its Landwind X7 model, which it sold at around one-third of the price at 375,800 yuan ($54,641).

Last week, Japan’s Honda Motor Co. Ltd. was back in court with Great Wall Motor Co. Ltd., accusing the latter of using two of its patented innovations — a rear door design and decorative structure — in its Haval H6 model.

This problem is not unique to China. Several sector experts said that South Korea and Japan — now two of the world’s top car-making nations — got their start churning out cheap copycat models to seize market share.

Foreign firms have long been reluctant to sue their Chinese rivals as the success rate is close to zero, and media coverage can actually boost copycats’ profile, an executive at a joint venture between a Chinese company and Honda said. The person preferred not to be named.

Even if a carmaker does file a copyright case, it can take years to reach a conclusion. Honda sued Shijiazhuang Shuanghuan Automobile Co. Ltd. in 2004, alleging aspects of the Chinese company’s S-RV model were lifted from its best-selling CR-V. It took 12 years for a verdict to be handed down. Honda lost.

In a separate suit, Honda was then ordered to pay 16 million yuan in compensation to Shuanghuan, as “negative publicity resulted in poor sales of the S-RV.”

When China started to develop its domestic car industry from around 2000 on, local engineers’ knowhow lagged behind their overseas peers. So people took shortcuts, like “reverse engineering” — or “copying” — foreign-made cars.

To reverse engineer a car, the company first buys the original vehicle before dismantling it part-by-part to study the design in detail. They then “engineer” a new model based on their discoveries, adding a few tweaks in the process.

Skipping original research and development can cut the cost of releasing an automobile by as much as 50%, said Liu Zhilu, a director at Net.nation Autodesign, an international auto design institution.

Usually, a carmaker will build at least 100 prototypes before a vehicle is commercially launched, which can each cost 10 times more than the finished vehicle’s sales price.

Also, this process allows the development process to be shortened to as little as 18 months, from around 3 years normally, Liu said.

Besides saving time and money, copying an existing popular model allows carmakers to minimize the risk of rolling out a lemon.

“There is no guarantee that your car will be selling like hot cakes once it launches, and imitating a model that is a proven bestseller is worth a shot,” said one design chief at a domestic auto company who requested anonymity.

While the low-cost copycat model has its benefits, industry veterans still suggest that companies should focus on building their own research and development capability over the long term to enhance their competitiveness.

Motors, electrical control systems and chassis, for instance, involve advanced technologies and automakers should plow money into these areas to improve their knowhow, said the domestic carmaker’s design chief.

Also, the heyday of ripping off one’s foreign rivals may be ending, as Jaguar’s victory may lead to more automakers finding themselves in court.

Keith Benjamin, Jaguar’s legal head, said in a statement after the March lawsuit: “We welcome this decision of the Beijing court, which further strengthens our confidence in investing in China and in the fairness of intellectual property adjudication in the Chinese courts.

“This ruling is a clear sign of the law being implemented appropriately to protect consumers and uphold their rights so that they are not confused or misled, whilst protecting business investment in design and innovation.”