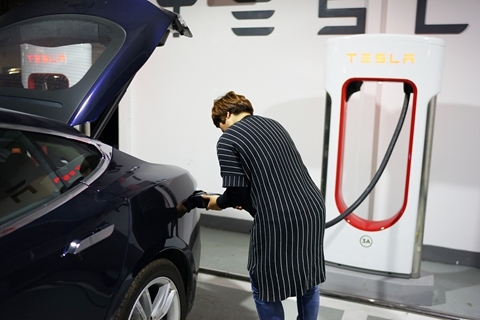 The new-energy vehicle industry is over-pursuing fast charging, and their charging algorithms are too simple to guarantee safety, said Ouyang Minggao, an academician at the Chinese Academy of Sciences and a new-energy vehicle expert, at a lithium battery industry forum Sunday.

Ouyang said his research team studied electric vehicles made by major automakers at home and abroad, including Tesla, and found that most electric vehicle batteries will deteriorate after 300 to 500 fast-charging cycles.

A new battery normally has a thermal runaway temperature of about 215 degrees Celsius, the point at which heat would quickly rise to the melting point of metallic lithium and cause a violent reaction. Fast charging a battery too many times can reduce the thermal runaway temperature as low as 107 degrees Celsius and make it easier to trigger a fire, Ouyang’s research found.

Electric vehicles often offer both slow-charging and fast-charging features. The slow option uses AC power, takes eight to 15 hours for a full charge and is generally used at home and in residential parking spaces. Fast charging uses direct current, which can greatly shorten the charging time and is available only at charging stations.

Earlier this month, Tesla opened its first Supercharging station to the public, offering to recharge a Model 3 in as little as 15 minutes at up to 250 kilowatts.

Volkswagen subsidiary Electrify America is working with Walmart to roll out a network of even faster charging stations for vehicles capable of 350 kilowatt charging.

Chinese companies are more ambitious. Qingdao Teld New Energy has launched chargers with capacity of as much as 450 kilowatts, and Star Charge offers 500 kilowatt chargers.

The rapid increase in charging capacity does not mean the technology is mature, Ouyang said. The algorithms controlling of domestic chargers is too simple, he argued.

Others maintain that fast-charging technology itself isn’t the problem. Fast charging is the direction many automakers are heading, but it must be precisely controlled, said Meng Xiangfeng, assistant to the chairman of Contemporary Amperex Technology Co., known as CATL, China's largest lithium battery maker.

Concerned after at least five incidents of EV fires or smoke, China’s Ministry of Industry and Information Technology last week ordered carmakers to conduct safety checks on electric vehicles for potential safety flaws with battery boxes, waterproof protection in cars, high-voltage wiring harnesses and on-board charging devices. Automakers are required to submit their findings by the end of October.

In April, a parked Nio ES8 model caught fire after having maintenance services in an authorized Nio shop in Xi’an. The company said an investigation found the fire was caused by a battery short circuit. The same month, a parked Tesla reportedly burst into flames in Shanghai. The U.S. company said it was investigating the cause.