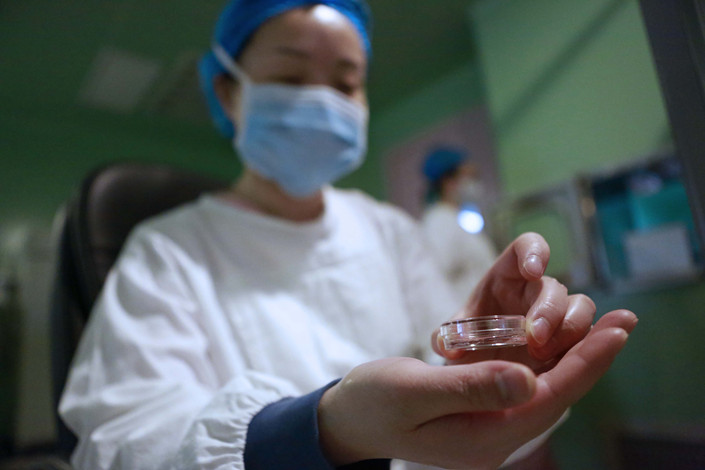 A staff member looks at an embryo at a hospital in Guiyang, Guizhou province in January 2018. Photo: VCG

The IVF specialist has found a strong niche providing reproductive services to a growing Chinese middle class that can increasingly afford such services. The company’s IPO shares priced at the top of their range at HK$8.54 ($1.09), helping the company to raise HK$2.8 billion. The shares jumped as high as 25% above their offering price shortly after trading began, but lost steam later in the day and ultimately closed up about 9%.

The company sold about a third of its IPO shares to four cornerstone investors, including health care investment specialists Ally Bridge Group and OrbiMed. Other early investors include Sequoia Capital and drugmaker WuXi AppTec.

Jinxin is one of only about 30-plus privately owned holders of licenses to provide IVF services in China, with the big majority of the roughly 470 licensees nationwide coming from the state-run sector. The company, which has a market value of about HK$22 billion, estimated its license as an asset is worth about 400 million yuan ($58 million).

With operations dating back to 2003, Jinxin Fertility is part of the larger Jinxin Group, a provider of health care-related products and services based in the interior city of Chengdu, Sichuan province. It was rated third in China’s assisted fertility market in 2018, and No. 1 among privately owned players with about 3.1% of the IVF market, according to its previously filed prospectus.

The company earns the lion’s share of its revenue by providing fertility services from its own facilities in China, and moved into the U.S. late last year with the acquisition of a couple of facilities in California. In its prospectus the company pointed out the broader market for fertility services in China is growing quickly. In 2017 the country had about 47.7 million infertile couples, and the number is expected to grow to 56.2 million by 2023.

Jinxin said its revenue rose nearly 40% last year to 921 million yuan, while its adjusted profit grew at a slower 25% to 250 million yuan.

The listing is the latest in Hong Kong by a growing wave of medical-related companies from the Chinese mainland, including providers of drugs, devices and services. Many of those are thriving on China’s growing middle class, as well as Beijing’s broader effort to ensure that all of the country’s 1.4 billion people have access to basic health services.