In Depth: China Tests Seismic Shift in How Investment Advisers Earn Their Bucks

By Zhang Yu and Huixia Sun 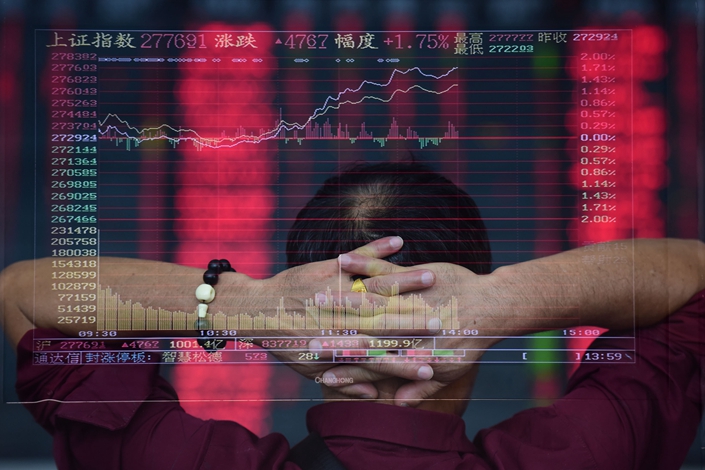 An investor looks at share prices at a brokerage in Fuyang, East China's Anhui province, on Sept. 21. Photo: IC Photo

China is about to launch a pilot program that will allow investment advisers to take full discretionary control of their clients’ accounts, with third-party sale agencies expected to be the first to participate, industry insiders have told Caixin.

The pilot program aims to test out a seismic change to how investment advisory firms charge their clients as regulators look to lay the groundwork for broader changes designed to accelerate development of the lagging industry in China, where a billionaire is minted every few days. Despite the country’s growing wealth, the combined annual net profit of all of its licensed investment advisory firms came in barely above 708 million yuan ($102 million) in 2017, according to a survey by the Securities Association of China. That’s less than the net profit of a typical midsize securities firm in the country.

Unlike more developed markets, China classifies investment advisory as a separate business that requires its own special license. As of 2014, the China Securities Regulatory Commission (CSRC) had issued 84 licenses for investment advisory services, but hasn’t issued a single one since. The main reason for the pause was a disagreement within the CSRC over whether to stick with current requirements for the industry, particularly one that prohibits investment advisers from having a fiduciary relationship with their clients where they can buy and sell at their own discretion, so long as it is in the client’s best interests, according to a source close to the regulator.

An example of a third-party sales agency is a joint-venture set up by U.S.-based investment advisory behemoth The Vanguard Group Inc., which has more than $5 trillion under management. Chinese third-party sales agencies are expected to make up the majority of the first batch of institutions approved for the pilot program. These firms have first-mover advantages, such as large customer bases and high name recognition, according to industry insiders. If securities firms join the trial in the future, it is expected that they will serve midrange to high-end clients, while the third-party sales agencies focus on retail clients.

In recent years, Western investment companies have stepped up efforts to tap into the huge market for investment advice in China. Foreign asset managers have obtained coveted licenses to offer onshore funds in China. In the most recent development, U.S.-based investment manager BlackRock Inc. announced on June 21 that it had completed registration with the Asset Management Association of China for its wholly-owned Shanghai-based investment advisory service.

On June 5, Ant Financial, the financial affiliate of e-commerce giant Alibaba Group Holding Ltd., and Vanguard, set up a joint venture, in preparation for the pilot program, according to industry insiders. The business license for the company, called Vanguard Investment Management (Shanghai) Ltd., notes that the investment advisory business is still subject to regulatory approval.

“As foreign wealth management institutions are entering Chinese markets soon, the CSRC hopes to cultivate Chinese-owned ones. However, revising the Securities Law takes a long time and so circumventing the obstacles in the prevailing legal framework allows Chinese firms to get started first,” a person in charge of asset management at a securities firm told Caixin.

In the first half of 2019, applicants including securities firms, fund firms and third-party sales agencies, went through the CSRC’s process to qualify for the pilot program. The regulator has since whittled down the number of applicants to less than 10, a list of which will be released in the near future, Caixin has learned from sources at the securities regulator.

Second, investment advisory firms face fierce competition from unregulated parties. Under current law, only licensed securities companies and institutions with the proper license are allowed to give clients investment advice.

In practice, however, many unlicensed self-styled stock-picking “experts” are offering free investment advice on social media platforms and in online chat groups, which are not covered under the law as a form of communication for investment advisory. These free services are stealing market share from licensed investment advisers.

After the launch of the pilot program, the companies approved to participate in it will be allowed to both offer investment advice and take full discretionary control of their clients’ investments as long as they accept a fiduciary responsibility with their clients, effectively agreeing to put their clients’ interests first.

By accepting this responsibility, investment advisers will no longer be limited to billing their customers based on commissions or consultancy fees. Instead, those that accept a fiduciary duty will be allowed to charge fees based on the amount of a client’s assets they manage, as well as performance-based fees.

In contrast, when investment advisers charge clients for every sale they make — which is what they do under the current commission-based system — it gives them an incentive to recommend high-cost products that can come at the expense of client interests, said a senior research analyst at a fund company.

The primary challenge to investment advisers with a fiduciary responsibility is to maintain client satisfaction. “In the past, when institutions charged transaction-based commissions or trail commissions, clients were relatively insensitive to fees. If the AUM-based fee model is adopted, client satisfaction becomes vital,” said a senior official with a third-party institution. “After all, the clients vote with their cash.”