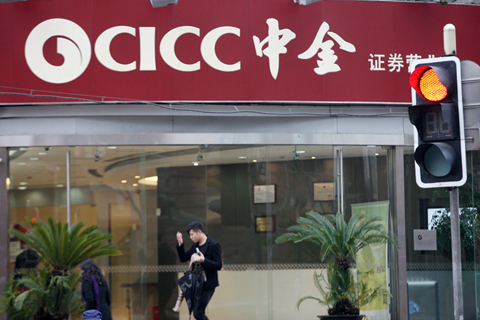 The China Securities Regulatory Commission (CSRC) Thursday issued the first written warning (link in Chinese) to an investment bank related to a listing on the new Nasdaq-style board. CICC, one of China’s largest investment banks, made unauthorized changes in application documents for Traffic Control Technology Co. Ltd., the CSRC said. The commission cited weak internal controls and ordered CICC to rectify the issue.

The episode represents a glitch in the new high-tech board’s trial of a new registration-based IPO system rather than China’s conventional, lengthy regulatory approval process. The Shanghai Stock Exchange said in May that it sent letters to dozens of companies that evaded questions and fudged numbers in applications to list shares on the board.

CICC must submit a report on rectification measures within 30 days, the regulator said. The CSRC also published a written warning (link in Chinese) Thursday to Traffic Control Technology.

In late April, Wan Jiuqing and Mo Peng, CICC employees in charge of Traffic Control Technology’s IPO application, altered numbers and content in the listing documents related to the company’s operations, technical capabilities and management, according to a statement (link in Chinese) of the stock exchange. The two altered the documents when asked to address regulator’s concerns and submit an updated prospectus.

However, under the rules of the high-tech board, it’s not allowed to revise application documents without the consent of the stock exchange or the CSRC. The exchange in May issued a warning against the two employees.

Founded in 1995, Hong Kong-listed CICC is a joint venture investment bank with businesses centered on investment banking, equities, fixed income, wealth management and investment management, according to its website. CICC has yet to comment on the matter.