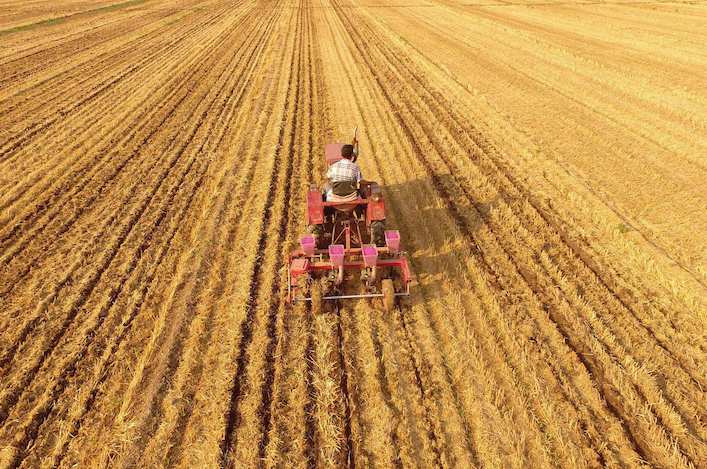 China’s nationwide soybean planting is expected to expand 8% to more than 8.67 million hectares in 2019. Photo: VCG

Chinese farmers are growing more soybeans as the world’s biggest importer of the high-protein food crop is buying less abroad amid an ongoing trade war with the U.S., a top soybean supplier.

In the first half of 2019, China’s imports of soybeans fell 14.7% from a year earlier to 38.27 million tons, according to official customs data. China’s annual soybean imports fell in 2018 for the first time since 2011. Market participants project that this year’s soybean imports will decline further as a result of the trade dispute.

Meanwhile, Chinese farmers are gearing up to plant the key crop for making cooking oil and animal feed as “a political priority” in response to central and local governments’ calls on farmers to grow more soybeans.

The agricultural planting area of soybeans increased in the first half of this year, the National Bureau of Statistics (NBS) said Monday in a press release, without disclosing specific data. Nationwide soybean planting is expected to expand 8% to more than 130 million mu (8.67 million hectares) in 2019, an increase of more than 10 million mu over last year, according to Pan Wenbo, director of the planting management department of the Ministry of Agriculture, at a press conference June 26.

China imports about 90% of its soybeans. According to official statistics, China’s current demand for soybeans is about 110 million tons a year, and domestic production is about 16 million tons.

With a third of its soybean imports coming from the U.S., China has sought to use the crop for leverage in the trade war by imposing a 25% tariff on U.S. soybeans last July. That caused American soybean sales to China to collapse until shipments resumed at the start of this year.

The U.S. Department of Agriculture also attributed the decline in China’s soybean imports to a sharp drop in China’s hog herd, which consumes feed made from soybeans. The African swine fever epidemic has caused the death of more than a million animals.

At the June press conference, the agriculture ministry’s Pan Wenbo said the planting area for spring- and summer-sown soybeans both increased, especially in Northeast provinces, the major soybean growing region in China.

In the face of downward pressure on the economy and “profound changes in the external environment,” the State Council, China’s cabinet, released a “No. 1 central document” in February, saying China should diversify its agricultural imports and plant more soybeans.

Even before the central government’s moves, Heilongjiang province, an agricultural stronghold in Northeast China, had already taken measures to encourage farmers to plant more soybeans. The province will award farmers government subsidies of as much as 200 yuan ($31.46) per mu of soybeans, according to several Chinese media outlets citing provincial government documents.

The central government will continue to provide subsidies to soybean producers in the Northeast region in 2019, Pan of the agriculture ministry said. For big soybean-growing counties, the government will step up incentives.