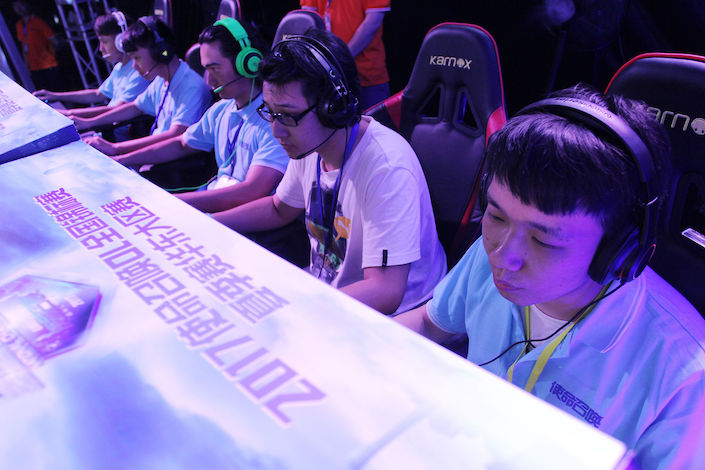 The value of China’s esports market has more than tripled since 2015 to touch 112.8 billion yuan last year, around 7.1 times that of the U.S. market. Photo: VCG

Chinese live-streaming platform Douyu International Holdings Ltd. opened down before rebounding in its trading debut on Nasdaq Wednesday after raising $775 million in its initial public offering.

Douyu, China’s largest game-centric live-streaming platform, ended flat in its first trading day at $11.50, same as its IPO price. The company opened down 4.2% at $11.02 per American depository shares (ADR) and plunged as much as 0.9% in the morning before bouncing back.

With a name that literally means “fighting fish” in Chinese, DouYu is valued at about $3.7 billion at the bottom-end pricing. Its listing was the biggest for a Chinese company in U.S. since Tencent Music Entertainment Group raised $1.07 billion in December, according to Bloomberg.

China’s esports market is expanding rapidly. The value of the market has more than tripled since 2015 to touch 112.8 billion yuan last year, around 7.1 times that of the U.S. market, according to consultancy iResearch. Analysts say they expect China’s esports market to more than double from its 2018 level to 247.8 billion yuan by 2023, with monthly active users rising to 400 million from 255 million in the same period.

The Twitter-like live-streaming platform, which focuses on esports, is 40.1% owned by internet giant Tencent Holdings Ltd. as the biggest shareholder. Douyu previously filed in April with the U.S. Securities and Exchange Commission (SEC) to raise as much as $500 million on the New York Stock Exchange but called off that plan citing poor market conditions.

The company said it has exclusive streaming rights to 29 major tournaments in China, including League of Legends, PlayerUnknown’s Battlegrounds and DOTA2.

David Kirton contributed to the story