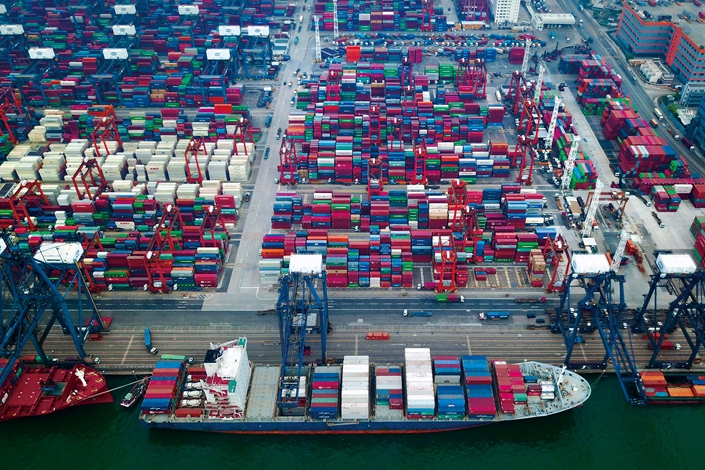 Containers wait to be shipped in or shipped out at Kwai Tsing Port in Hong Kong in August 2017. Photo: VCG

* Vietnam’s container throughput rose 3% year-on-year in the first half of 2019 to 9.1 million TEUs

* Orders due to trade diversion stemming from the China-U.S. trade spat were worth nearly 8% of the country’s gross domestic product in the 12 months through the first quarter

(Beijing) — Vietnam’s container throughput surpassed Hong Kong’s in the first half of this year, in part due to the China-U.S. trade war diverting trade to the country.

In the first half of 2019, Hong Kong saw a container throughput of 9.06 million twenty-foot equivalent units (TEUs), down 8.1% year-on-year, according to government data from the Hong Kong Maritime and Port Board. TEU is a measurement of volume based on the size of a standard 20-foot shipping container.

“As tit-for-tat tariff hikes between the U.S. and China increase, so does the cost of importing from each other,” Nomura Holdings Inc. economists said in a report. “However, there is a silver lining: the two countries diverting imports away from each other potentially benefits industries in different economies.”

“Vietnam is by far the largest beneficiary,” the Nomura economists said, adding that orders due to trade diversion were worth nearly 8% of the country’s gross domestic product in the 12 months through the first quarter of this year.

In the first four months of 2019, the total value of Vietnam’s goods exports rose 6.5% year-on-year, according to data from Vietnam Customs. Vietnam’s role as a “transfer terminal” contributed largely to the country’s strong export growth, Shen Jianguang, JD Digits’ chief economist, said in a note (link in Chinese).

Also, the growth in Vietnam’s exports to the U.S. in recent months has been of a similar size to the growth in its imports from China, Shen said, adding that this means it’s likely that Chinese goods are being re-exported to the U.S. through Vietnam.

However, Shen predicted this situation might not last long. The U.S. has long been wary of moves to circumvent its increased tariffs on goods, for instance those on South Korean products, by shipping through Vietnam, and has put Vietnam on the observation list of currency manipulators due to the country’s climbing surplus with the U.S., Shen said.

As of June, Hong Kong had seen year-on-year declines in throughput volume for 17 consecutive months, and saw the sharpest fall of 17.9% in February. Ports in Chinese mainland cities such as Guangzhou and Shenzhen have posed a threat to Hong Kong given their cost advantages, Paul Tang Sai-on, chief economist of The Bank of East Asia Ltd., told Caixin.