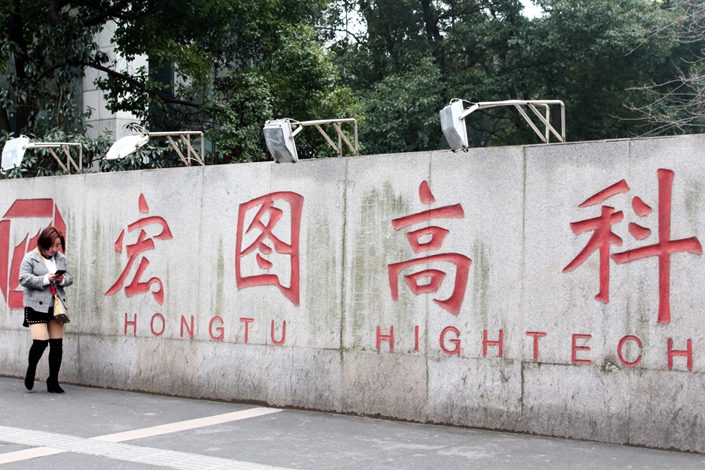 * Two Nanjing companies have defaulted on a total of 2.7 billion yuan ($392 million) of debt, pushing the total size of corporate defaults this year beyond 56 billion yuan

* Defaults will continue as the financial deleveraging campaign rolls on despite slowing economic growth, a fixed-income securities director of the proprietary trading desk of a securities company said

(Beijing) — Two of the largest private sector companies in the eastern city of Nanjing have again added to the wave of corporate debt defaults in China, as the country forges ahead with its crackdown on financial risks and its campaign to deleverage the economy.

Shanghai-listed retailer and electronics manufacturer Jiangsu Hongtu High Technology Co. Ltd. failed to make the interest and principal payments due Monday on 700 million yuan ($101.76 million) in medium-term notes issued in 2016, according to the company’s filing (link in Chinese) to the National Interbank Funding Center on Monday.

Nanjing Construction Industrial Group Co. Ltd. failed to pay interest and principal due Friday on 2 billion yuan in privately placed green bonds issued in 2017. The company, which mainly works on municipal engineering projects, couldn’t come up with the payments after all of the bondholders had exercised an option to sell the securities back early, according to a statement from the company seen by Caixin.

As of Saturday, China’s $13 trillion bond market had seen 79 defaults this year, involving 53.77 billion yuan, according to research by Everbright Securities Co. Ltd. With Jiangsu Hongtu and Nanjing Construction’s defaults, this amount has surpassed 56 billion yuan.

Defaults will continue as the financial deleveraging campaign rolls on despite slowing economic growth, a fixed-income securities director of the proprietary trading desk of a securities company told Caixin.

Jiangsu Hongtu is controlled by Sanpower Group Co. Ltd., a property-to-pharmaceuticals conglomerate that has been in a debt crisis since June 2018. Before that, the company had gone on a credit-fueled bender of acquisitions that included the purchase of House of Fraser, the British department store operator. Jiangsu Hongtu previously failed to make payments for the interest and principal on 700 million yuan in three-year medium-term note due on Nov. 25.

Nanjing Construction, which had been known as Nanjing Fullshare Industrial Holding Group Co. Ltd. before the end of January, had run into debt repayment trouble on Dec. 26, but managed to get the problem resolved with the assistance of the Nanjing city government (link in Chinese).

A previous version of this story reported that Jiangsu Hongtu and Nanjing Construction added to the ranks of defaulters in China. This is incorrect because both companies had already defaulted.