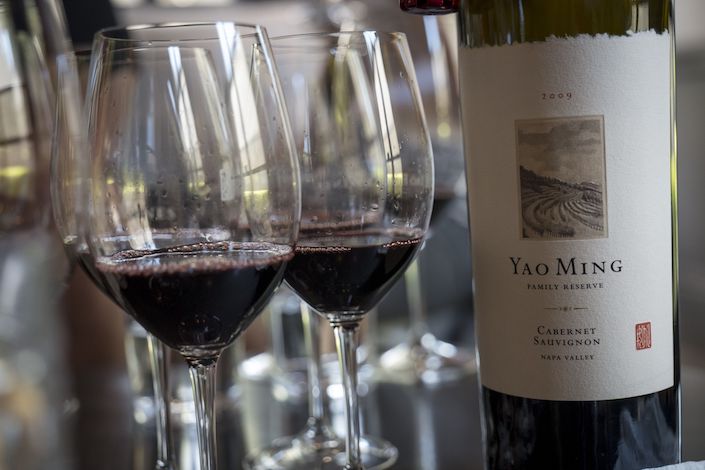 (Bloomberg) — A decade ago, basketball legend Yao Ming was such a celebrity in China that he carried the Olympic torch into Tiananmen Square.

But these days, not even the 7-foot, 6-inch Yao can fight his way through the U.S.-China trade war.

Yao’s trouble involves, of all things, wine, his post-NBA business in Napa Valley. Across California, the state’s signature wine business is getting hit by the tit-for-tat tariffs coming out of Washington and Beijing.

China’s latest round of retaliatory tariffs put the combined tax rate on a bottle of American wine at 93%, pushing prices out of reach for much of the Asian country’s growing middle class. Yao Family Wines, started by the Hall of Famer in 2011, has seen its export business drop by half over the past year, said Tom Hinde, the vineyard’s president and winemaker.

California vintners large and small who have spent years building relationships with China are now seeing their work undone by the tariff dispute. Their travails illustrate the far-reaching effects of President Donald Trump’s trade war, where carefully laid business plans from fishing rod suppliers to soybean farmers can turn on the latest headline, meeting or tweet.

“There’s indecisiveness in the outcome, so that puts a pall over the buyers’ enthusiasm,” Hinde said. “We’re hurting ourselves.”

The value of U.S. wine exports to China dropped by 25% in 2018, when the first retaliatory tariffs hit, compared with 2017, according to the San Francisco-based Wine Institute, an advocacy group for California’s wine industry. The state, which accounts for more than 90% of America’s wine sales to other countries, has borne the brunt of the decline.

While China is the industry’s fifth-largest export market, it’s been viewed as a big opportunity for growth. Vintners worry that years of work cultivating business in the country could be ruined if tariffs persist and Chinese wine drinkers come to view American bottles as too expensive. And even if the levies end, business wouldn’t automatically snap back.

Wine drinkers may not understand that the price they pay reflects multiple layers of businesses passing on the higher tariffs: importers that buy the bottles from producers; distributors; and finally stores or restaurants that sell to imbibers.

At M on the Bund, a popular Shanghai restaurant, Swain’s sauvignon blanc before the latest round of tariffs cost the equivalent of $120, about $50 more than a comparable wine from New Zealand not subject to the same burden, Swain said. Now, the restaurant is probably selling it at $220, if it still has it in stock. Swain said her orders from China have essentially fallen to zero.

Swain and other vintners are looking to countries elsewhere in Asia to fill the void. But there, too, they’ve been undercut by Trump. One of his first acts as president was to pull the U.S. out of the Trans-Pacific Partnership. That has lowered the appeal of California wines in Japan, on which import duties remain in place, while those on Australian and New Zealand competitors will eventually go away. Australia already exports more wine than the U.S.

If the trade war with China grinds on, “we’re going to have open other markets around the world,” said Anthony Hsu, CEO of Maxville Winery in Napa County’s Chiles Valley, where exports have dropped by almost half over the past 10 months. The producer, whose parent is a Chinese company, is now looking to expand its sales in Vietnam and Thailand.

Vintners have been leaning on their elected representatives to bring them relief. It’s unclear whether they’ve had any impact on the teetotaler president, who himself owned a Virginia winery that’s now run by his son Eric.

In June, Trump said on CNBC that “California guys” have complained to him that their wines are charged a lot in France while the U.S. levies a lesser burden on French vintages. He’s vowed to do something about it. Earlier this month, the administration said it would investigate a French plan on technology companies, a move that has precipitated new tariffs before.

Honore Comfort, vice president of international marketing at the Wine Institute, disagreed that retaliation is the way to go.

“We would rather be in free-trade agreements,” she said. “Those comments don’t necessarily help us.”

As for Yao, whose most popular offering sells for $95 and most expensive bottle tops out at $258, the tariff effects are so extreme that his vineyard may accelerate plans to produce wine in China to avoid the levies. That would be a first for a U.S. winery, according to Hinde.

“People aren’t going to stop drinking wine in China because the U.S. and China have a tariff dispute,” Hinde said. “It would be nice if we can wrap this thing up and we can all go back to our business as normal.”