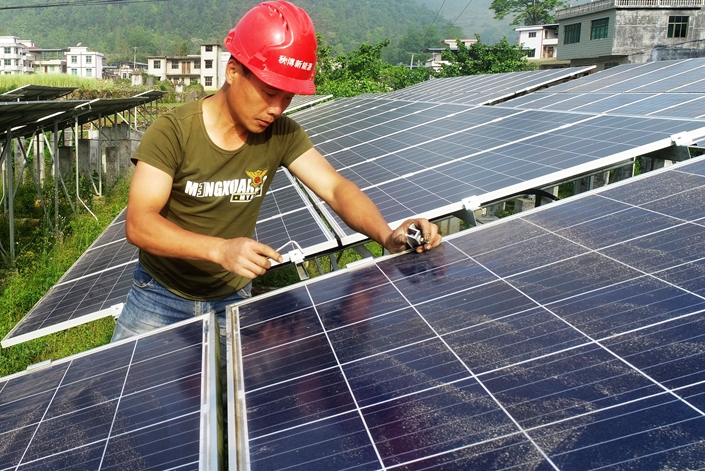 Growth in new solar power installations in China is expected to remain flat this year as the government continues to cut subsidies and as the industry undergoes consolidation, an industry group said.

China is expected to put 40 gigawatts (GW) to 45 GW of new solar power capacity into operation in 2019, said Wang Bohua, vice chairman of the China Photovoltaic Industry Association (CPIA) at a press conference in Beijing on Thursday. The country built 44.3 GW of new capacity last year, down from 53 GW in 2017, according to the National Energy Administration.

The drop came after a shift in June last year, in which the central government pulled the plug on its generous subsidy program that had fueled the industry’s boom for nearly a decade. The change aimed to curb incentives that led to excess capacity and wasted investment, analysts said.

While China installed 11.4 GW of solar power capacity in the first six months of 2019 — down 53% year-on-year — momentum is expected to pick up in the second half when a wave of new renewable projects is planned to come online, Wang said.

In May, the central government announced the first batch of solar projects to be built in China without government aid. After that, local authorities were allowed to arrange the bidding process required for projects seeking government assistance.

Wang said the country will develop 14.78 GW of subsidy-free solar projects this year, along with 22.79 GW of projects that have been selected via bids to receive government aid.

As subsidies get cut and costs rise, the industry’s gross margins will inevitably decline, which will drive consolidation, said Wu Shengwu, an official with the Ministry of Industry and Information Technology.

Domestic manufacturers will have to ramp up research and development to ensure they develop the cutting-edge technologies need to stay ahead of their competitors, he said.

The industry has entered a period of ferocious competition. Six manufacturers of polysilicon — a crucial raw material for solar panels — suspended production during the first half, even as some leading enterprises increased production, according to the CPIA.