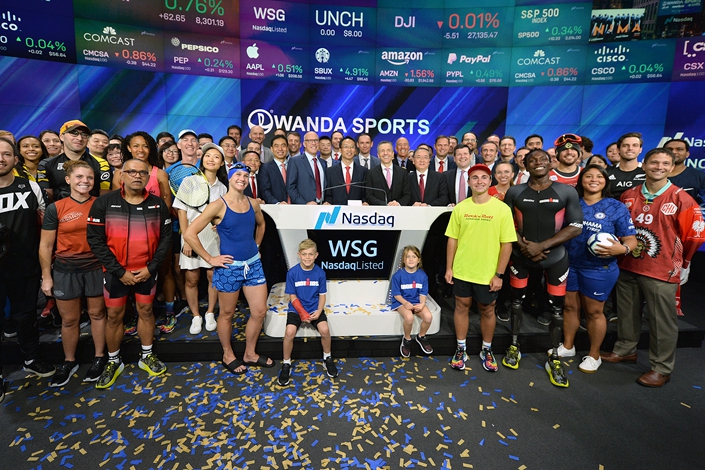 Wanda Sports Group Chairman Lincoln Zhang stands behind the podium at the center of a crowd of executives and athletes for the company’s IPO launch Friday on the Nasdaq in New York. Photo: VCG

Wanda Group has raised about $200 million from an initial public offering (IPO) for its sports division, less than half its original target, and is in talks to sell a stake in its Legendary Entertainment film unit, continuing an asset sell-down to ease its debt burden.

Wanda is among a group of Chinese conglomerates that embarked on aggressive expansions earlier this decade as companies were encouraged to go global as China’s economic wealth grew. But Beijing has turned the tables on that group over the last two years on concerns about too much debt, leading to asset sales and other cash-raising exercises by the group.

Wanda has been planning the IPO for its Wanda Sports Group Co. Ltd. for most of this year, and made its first public filing for the New York listing in June with plans to raise about $500 million. But it was forced to scale back the plan due to tepid demand for a company that has wavered between profits and losses over the last three years.

It ultimately priced its American depositary shares (ADSs) at just $8, well below its original goal of selling them at between $12 and $15. The stock immediately fell when the shares started trading in New York on Friday, and ultimately closed down 35.5% on the day — the second-worst debut this year for a U.S. IPO. In the end Wanda raised just $190 million, though the total could rise to as much as $230 million if the deal’s underwriters exercise an overallotment option.

Wanda Sports’ assets include the owner of the U.S.-based Ironman Triathlon, as well as Swiss sports marketing firm Infront Sports & Media AG, both acquired by Wanda at the height of its global buying spree. But seasonality in the sports business has led to swings between profits and losses for the company, in a possible turn-off to investors.

Separately, the company is in talks to sell a stake in Legendary Entertainment, the studio behind the “Godzilla” franchise, to U.S.-based investment firm Colony Capital Inc., according to several sources familiar with the matter. The investment could value the backer of “Jurassic World: Fallen Kingdom” significantly lower than the $3.5 billion Wanda acquired it for in 2016, some of the people said, asking not to be identified because the talks are private.

The investment would be made via a new fund called Colony Media Partners and mark a return to the media industry for Colony, which sold production company Miramax to Qatar-based BeIN Media Group in 2016, some of the people said. Saudi Arabia’s Public Investment Fund (PIF) has also shown interest in investing in Legendary via the fund, the people said. No deal has been finalized and could still fall through.

Representatives for Colony, Legendary and PIF declined to comment. A Wanda spokesman did not have any immediate comment.