In Depth: STAR Market Investors Wrestle With How to Price Shares 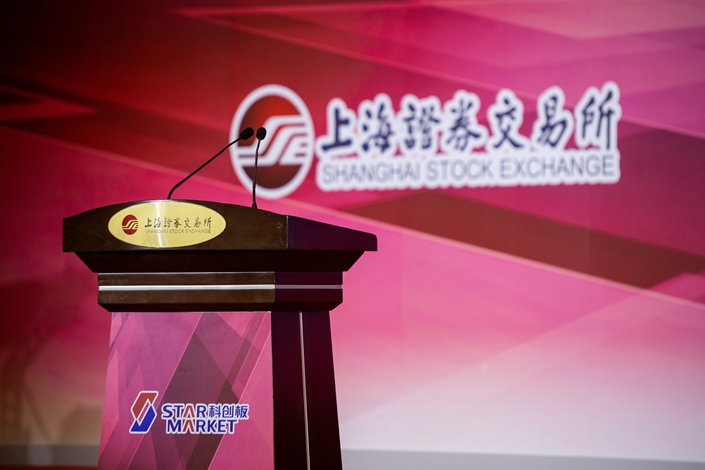 China’s financial regulators have abandoned the cap for companies listing on the STAR Market. Photo: VCG

*Traditionally tightly controlled by the government, IPO pricing on the new tech board has been left to market participants, particularly mutual funds

(Beijing) — It used to be that the shares of companies going public on the Chinese mainland were sometimes priced too low.

With the launch of trading on the Shanghai Stock Exchange’s Science and Technology Innovation Board on July 22, some in the market worry that newly listed stocks on the board are being priced way too high.

A week or so before trading began, Advanced Micro-Fabrication Equipment Inc. China, one of the first companies to apply to list on the new tech board, had a price-to-earnings (PE) ratio of 170.75 (based on its profit before extraordinary items), the highest among all of the companies looking to list there. More importantly, the ratio dwarfed the informal PE cap of 23 that regulators have placed on companies listing on the mainland’s other boards over the last few years.

China’s financial regulators have abandoned the cap for companies listing on the new board, dubbed the STAR Market, which President Xi Jinping proposed in November 2017. Modeled on the Nasdaq in the United States, the board is considered to be the government’s way of encouraging investment in China’s technology sector.

Since the board started taking applications in March, more than 140 tech companies have applied to list there. Most of them specialize in advanced technologies such as biotech, artificial intelligence, big data and microchips. Many are startups in the early stages of development. Many have not made a profit.

All of this poses a question crucial to the success of the much-hyped new board: How should company shares be priced at their initial public offering (IPO)?

Over the last few years, IPO pricing has been tightly controlled in China. The China Securities Regulatory Commission (CSRC) has been putting out “window guidance,” a sort of informal arm twisting of participants in the financial markets, about IPO pricing since 2014. One of these guidelines capped the PE ratios at 23 for IPOs on the mainland’s other stock boards. Critics of the cap have said that it distorts the market, making it harder to judge the value of newly listed stocks.

This time around, the CSRC decided to use the launch of the new board as an opportunity to let the market decide IPO prices. The change has been cheered by market participants, particularly mutual funds, which stand to benefit greatly because of their scale and expertise.

Letting the market decide has its drawbacks, however, as illustrated with Advanced Micro-Fabrication Equipment’s sky-high PE ratio. Before trading began on the new board, some in the market worried that the ratio was so high that the company’s stock price would fall quickly once shares started changing hands.

If that happens, the regulator’s response will reveal a lot about how committed it is to letting the market decide IPO prices on the new board, said Wang Jiyue, a former IPO sponsor in China. “A drop below IPO prices is bound to happen,” he said. “Without it, it’s impossible to really let the market decide the price.”

Wang said he hopes regulators will stand firm in the face of pressure that might come from investors and the media disturbed by price swings.

On the STAR Market’s first day of trading, the shares of all 25 companies listed on the board rose. The biggest gainer, Anji Microelectronics Technology (Shanghai) Co. Ltd., finished the day up more than 400% from its IPO price. The average increase was nearly 140% on the first day.

The guidance policy for the STAR Market tilts toward medium- and long-term funds, with mutual funds accounting for the majority.

Regulators have also stipulated that at least 50% of the final offline share allotment goes to mutual funds, social security funds, pension funds, corporate annuities and insurance companies. To promote further stability during the board’s early days, the Shanghai Stock Exchange has also suggested that no less than 70% of the offline share issuances ought to be allotted to these medium- and long-term funds, along with investors under the Qualified Foreign Institutional Investors program, which was launched in 2002 to allow overseas investors to invest in the mainland stock market.

The fact that mutual funds have become the largest investors on the board has put higher requirements on the middle and back offices of these fund management companies. In preparation for the board’s launch, many have committed additional resources to their investment research, operations and information technology departments.

Investment research has been an area of focus for these fund management companies. For instance, GF Fund Management Co. Ltd. has set up a dedicated STAR Market research group consisting of three fund managers and researchers from five sectors. This is seen as a typical team structure among China’s mutual fund management companies. Fund managers hold regular meetings with researchers to discuss topics such as investment targets and pricing strategies. From time to time, these teams visit target companies and carry out field studies. Caixin learned from Fullgoal Fund Management Co. Ltd. that it made a number of visits to target companies as they prepared to launch their STAR Market funds.

Internal operations and computer systems also need to be updated because the board has some characteristics that distinguish it from Shanghai’s main board. For example, after a company lists on the STAR Market, there is no limit on daily price movements for its first five trading days. After that, daily price changes are limited to 20%, unlike on the main board, where there is a 10% daily limit.

Because a substantial portion of companies that applied to list on the STAR Market are startups, it is harder to price them fairly through conventional methods such as PE ratios. Zhu Bin, an analyst from Southwest Securities Co. Ltd., sees obvious limitations to attempting to value technology startups with PE ratios. Tech startups require big investments; they grow fast and carry a lot of risk; and a large proportion of their assets are intangible, he said.

“The traditional method valuing them through a PE ratio tends to considerably underestimate their growth potential,” he added.

Zhu Haibin, an analyst from Essence Securities Co. Ltd., lays out in detail the three biggest difficulties in valuing companies listing on the new board. The first is that many of them have yet to turn a profit, making PE ratios invalid. The second is that many are very young without enough historical data to value them through traditional methods. The third is that it is difficult to value these companies by comparing them with their peers because many of the companies listed on the board have innovative technologies or business models, making it hard to find similar companies to serve as a reference for comparison.

Some experts have noted that, globally, there are not that many different valuation methods available for money-losing companies. The most fundamental method remains the discounted cash flow (DCF) model, according to David Chin, head of investment banking for the Asia-Pacific region at UBS Group AG. But he points out that even DCF can come up with a wide range of valuations.

A fund manager at a large mutual fund firm explains that using the price-to-cash flow ratio could be suitable to those companies with cash flows but no profits; while the price-to-sales ratio works better for companies with stable revenues but poor cash flows. For those that don’t even have revenues, such as some pharmaceutical startups, valuing them by discounted future cash flow might be the answer.

The fundamental difficulty in valuing these companies, the fund manager said, is that every company is a complex individual, and any single method of valuation only looks at the company from one particular perspective. In order for such valuations to be valid, all market participants need to agree to view the company from this one particular perspective.

Some in the market attribute the success of mutual funds more to their strategy of price quoting than to their ability to price IPOs. In their view, mutual fund firms have a knack for quoting a price that falls within the range provided by underwriters so they can be allotted more shares.

The price quoting process is “a game between institutions inquired, issuers and underwriters,” notes one market insider who declined to be named. “The demand for STAR Market shares is greater than the supply right now, so issuers and underwriters have more pricing power at the moment, while the institutions inquired are merely playing a supporting role.”

According to GF Securities Co. Ltd. analyst Dai Kang, there are two things about price quoting to pay attention to in the early days of the STAR Market. The first is that investment value research reports issued by underwriters are playing a key guiding role in the pricing process. Take Suzhou HYC Technology Co. Ltd., the first company approved to list on the board, as an example. Its IPO price was set at 24.26 yuan per share. This is exactly the median price offered in the underwriter’s investment value research report. At the same time, about 80% of the quotes from institutions fell within the underwriter’s reference range, showing that institutional investors were for the most part being rational.

Dai suggested that early IPOs on the board are unlikely to be priced high, because the higher the IPO price, the higher the risk of falling below it. Therefore pricing lower is potentially good for underwriters, which have been required by the regulator to make investments in the companies they underwrite. Their investment value research reports have thus become one of the most important anchors in the price quoting process.