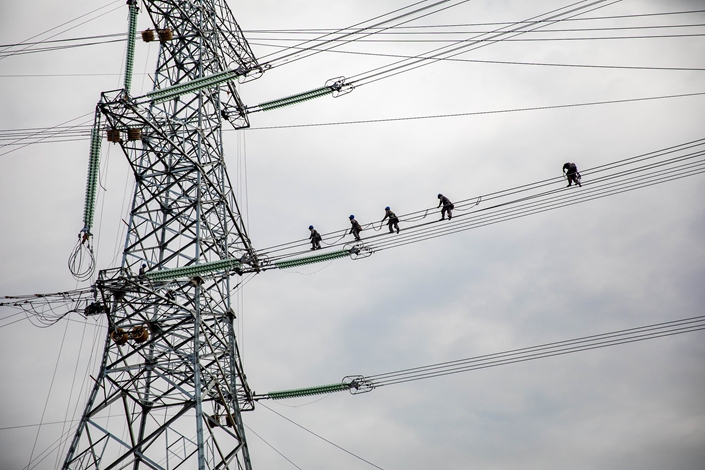 Investment in China’s power transmission infrastructure dropped nearly 20% in the first half of this year, accelerating a slowdown, as operators squeezed by electricity pricing reforms become more selective in their investments.

Infrastructure spending has helped to power China’s huge economic expansion over the last three decades, as Beijing built up massive networks of roads, power grids and rail and telecom networks to facilitate development. But as the economy slows and new infrastructure is less necessary, broader spending on such projects has also slowed in tandem.

Spending on power transmission projects in the first six months of this year dropped 19.3% to 164.4 billion yuan ($23.9 billion), the China Electricity Council said at a meeting last Friday. Among the different investment types, direct current projects fell 77.8% in this year’s first quarter, according to the council. Investment in 800 kilovolt (kV) ultra-high voltage direct current transmission projects fell 38.3% over the three-month period.

Some 16.3 million meters (53.4 million feet) of cable for 220 kV and higher were added in the first half of the year, down about 27% from the year-ago period. But projects for cables of 110 kV or less actually rose, showing investment is going more into rural network building and upgrades that have lighter load requirements, a department official from the Electricity Council told Caixin.

Market-oriented reforms aimed at bringing down electricity costs for businesses are a primary factor squeezing grid operators, which are becoming more selective about their new investments, according to industry officials. Ongoing reforms will result in a continued drop of about 10% this year in electricity prices for businesses, said Ye Chun of the council’s development and environmental resources division.

The changes are putting particular pressure on China’s hopes for building a number of expensive, ultra-high voltage transmission lines.

Beijing has been hoping to get more private money involved in such construction with a program announced late last year, but progress has been slow. China hopes to use the technology, largely absent in the rest of the world, to transmit power over long distances from its resource-rich west to the more industrialized eastern part of the country.

As transmission companies come under pressure and broader transmission infrastructure matures, grid operators are expected focus more on lighter investments, according to industry players and observers. Investment in such supporting infrastructure, such as the addition of artificial intelligence capabilities to existing networks, is relatively weak right now, Ye said.

In the current environment of reform and falling prices, companies will focus on investments that maintain their value, an official from State Grid Corp. of China, the nation’s dominant operator, told Caixin.

Spending on power transmission infrastructure in China began an expansion run in 2011, peaking with double-digit percentage growth rates in 2015 and 2016. But a turning point came in 2017 when investment fell by 2.2%, marking the first decline since 2010. Investment for last year was largely flat.