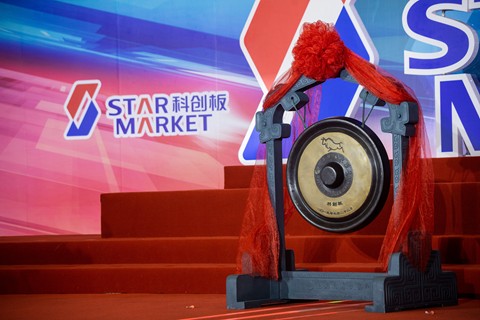 Two more companies withdrew applications to list on the Shanghai bourse’s new high-tech board, bringing the total to four, the exchange said Monday (link in Chinese).

The Shanghai Stock Exchange said it had concerns about all four companies’ businesses, accounting and information disclosure and said the concerns were important factors behind the companies’ decisions to withdraw.

The new Nasdaq-style trading venue — also known as the STAR Market — debuted July 22 with the first 25 listed stocks surging from their initial public offering (IPO) prices by an average of nearly 140%, creating three new billionaires. But at the end of last week, that first-day frenzy showed signs of cooling.

The STAR Market is a testing ground for reforms to China’s stock markets. It is the first trading venue in the country to move from an approval-based IPO system to a registration-based system, a move designed to cut red tape. It has also waived the usual restrictions on IPO valuations and allowed unprofitable companies, as well as shares with unequal voting rights.

Official data show that 149 companies have submitted applications to list as of Tuesday, 28 of which have been successful.

NKD Pharma withdrew its application July 24, the bourse said. The exchange raised concerns that its sales are dependent on its two largest clients and about the authenticity of the company’s income.

Haitian Ruisheng’s application was halted after four rounds of inquiry. The company did not provide sufficient information about its business in the three years to 2018, the bourse said in a statement. The exchange said it also asked the company to explain its 725.4 million yuan ($105.4 million) IPO fundraising target, which was far greater than its total assets and revenue.

Additionally, the auditor — Ruihua Certified Public Accountants — is now facing a probe by the securities regulator in relation to a fraud accusation being leveled at one of its clients, Kangde Xin Composite Material Group Co. Ltd.

Papaya Mobile was the first company to end its listing application, with the Shanghai Stock Exchange saying in a July 8 statement (link in Chinese) that it had concerns about the company’s information disclosure and whether it really was a genuinely high-tech company. The bourse said the company had no Chinese patents, had just one U.S. patent, and less than 5% of its revenue went to research and development from 2016 to 2018.

The failure of Papaya’s application will act as a warning to companies applying to the board that do not meet its criteria, said independent investment banking analyst Wang Jiyue.

The stock exchange expressed concerns about HeJian’s relationship with its controlling shareholder, the Taiwan-based United Microelectronics Corp., after the exchange found that the two companies had overlapping clients and suppliers. HeJian was the only one of the nine initial applicants to the board that was operating at a loss.