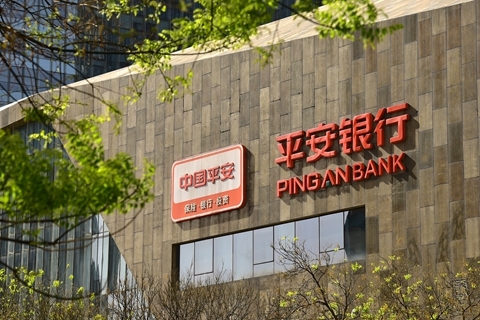 Ping An Bank, the banking arm of China’s second-largest insurer Ping An Insurance, reported higher-than-expected first-half results while projecting that 26 billion yuan ($3.7 billion) of bonds will be converted into equity this year, beefing up capital.

Shenzhen-listed Ping An Bank reported revenue of 67.8 billion yuan for the first six months this year, up 18.5% from the same period last year. Net profit climbed 15.2% to 15.4 billion yuan, compared with 7% annual growth in 2018 and 2.6% in 2017. Bank executives attributed the rising profit to improved interest income and strengthening retail banking and intermediary business.

The results beat analysts’ estimations and pushed the company’s shares up 6.2% Thursday to 14.38 yuan. Ping An Bank’s stock has gained more than 56% since the beginning of this year. The rising stock price creates the possibility for Ping An Bank to swap 26 billion yuan of convertible bonds into equity.

The bonds, issued in late January, can be converted into shares after a six-month lockup period at an exchange price at 11.63 yuan per share, according to a company statement June 26. As of Tuesday, bondholders have converted bonds with a face value of 7.67 million yuan into Ping An Bank ordinary shares, according to the bank.

Under terms set when the bond were issued, if Ping An Bank’s share price exceeds 120% of the swap price, or 13.96 yuan each, for 15 trading days within a period of 30 trading days, a compulsory conversion would be triggered.

With the shares’ Thursday close of 14.38 yuan, the stock has traded above 13.96 yuan for seven trading days since July 25, when the lockup period expired, according to Zhou Qiang, the bank’s board secretary.

If the bonds are converted, Ping An will realize a 22 billion yuan capital increase under accounting rules, bolstering its capital adequacy ratio by 1 percentage point, Zhou said. The probability is high that the bonds will be fully converted within the year, Zhou said.

China’s regulators encouraged commercial banks to bolster their capital buffers through bond sales earlier this year to contend with rising defaults and the country’s slowing economic growth. Ping An Bank was among dozens of institutions approved to issue convertible bonds amounting to hundreds of billions of yuan.

The net interest margin of Ping An Bank was 1.3% during the first half, 0.18 percentage point higher than a year ago, reflecting better profitability. Retail banking business generated 10.8 billion yuan of net profit for the bank, or 70.2% of total profit.

By the end of June, Ping An Bank had outstanding personal deposits of 540.8 billion yuan, up 17.2% from the end of last year. Personal loans totaled 1.2 trillion yuan, 6.1% higher than at the end of December, the bank’s financial report showed.