By Quan Yue and Timmy Shen 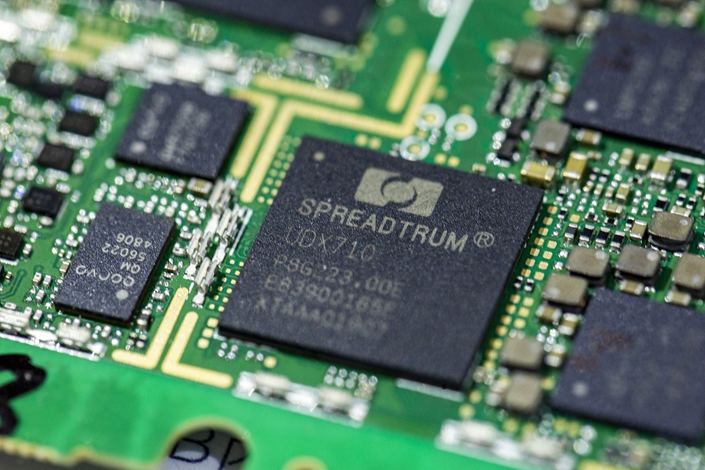 A smartphone chip produced by Tsinghua Unigroup is on display at an exhibition in Shanghai in March. Photo: VCG

A business group founded by prestigious Tsinghua University has just abandoned its plan to sell most of its stake in a major domestic chipmaker to a Shenzhen state-owned investment company due to the deteriorating market environment.

Tsinghua Holdings Co. Ltd., set up in 2003 by the public university in Beijing, known for its engineering research and development capabilities, ended its plan to sell a 36% stake in Tsinghua Unigroup Co. Ltd., which produces smartphone chips and provides cloud services, to state-owned equity investor Shenzhen Investment Holdings Co. Ltd., according to an exchange filing (link in Chinese) of a Unigroup’s unit.

That deal was intended to implement Beijing’s plan to pare back colleges’ commercial asset holdings. In May 2018, Beijing rolled out guidelines to place business ventures set up by colleges and universities under “state capital management reform” so that the schools could “focus on education.”

However, it hasn’t been smooth sailing for Tsinghua Holdings attempts to sell its stake in Unigroup. In September 2018, it first planned to sell its 36% stake in Unigroup to two local state-owned asset managers, but those deals (link in Chinese) were dropped the next month, with Shenzhen Investment announcing it would buy the stake instead. But now that plan has been set aside due to “changes in the external market environment,” Tsinghua said in the exchange filing.

The Chinese economy has continued to slow due to the escalating trade war with the United States. Weaker growth, and the depreciation of the yuan exchange rate last week, have increased obstacles to raising capital to fund investments.

Unigroup is just one of several assets Tsinghua is trying to sell. Tsinghua Holdings announced in April that it planned to sell a 21% stake in Tsinghua Tongfang Co. Ltd., an information and energy-conservation technology company, to an investment unit of China National Nuclear Corp., in a deal valued at 7 billion yuan ($1 billion). The sale would dispose of the majority of Tsinghua’s 25.75% stake in the company.