By Peng Yanfeng and Tang Ziyi 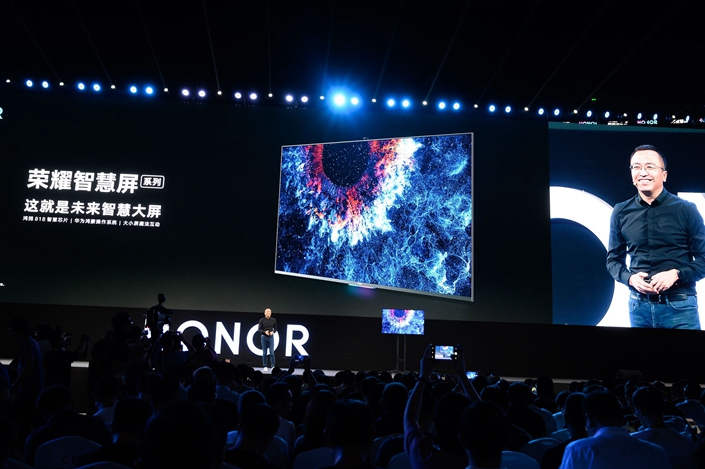 Chinese telecom giant Huawei will enter the ultra-competitive smart TV space using a newly unveiled self-developed operating system as its first model, even as history shows the company faces an uphill climb in gaining acceptance for its HarmonyOS.

Confirming rumors that have been swirling since the start of the year, Huawei Technologies Co. Ltd. launched its first smart TV models at its annual developer conference Saturday in the southern city of Dongguan, where the company has a key manufacturing site.

The pair of 55-inch smart TVs — called the Honor Vision and the Honor Vision Pro — contain different hardware such as cameras and storage capacity. They will be priced at 3,799 yuan ($540) and 4,799 yuan, respectively, when they go on sale on Thursday.

The release of the smart TVs illustrates Huawei’s ambition to create a lineup of internet-connected products that will run its self-developed HarmonyOS. The operating system will allow the company’s products such as smartphones, tablets and notebook computers to connect with the TVs, said George Zhao, president of Honor, Huawei’s consumer electronics arm.

The operating system HarmonyOS, or “hongmeng” in Chinese, was launched one day before the smart-TV announcement on Friday. The operating system is part of Huawei’s backup plan after the United States added the telecom giant to its so-called Entity List, restricting its ability to do business with American suppliers.

The sanctions initially raised concerns that Huawei phones would be unable to offer Google services such as proprietary apps and Gmail, after Google said in May that it would comply with the U.S. government’s order to sever business ties with Huawei.

Although U.S. President Donald Trump has signaled that restrictions on Huawei will be relaxed, the company remains on the Entity List and could potentially lose access to Google’s Android services if the sanctions tighten up.

Yu Chengdong, Huawei’s mobile chief, said at the HarmonyOS launch event that the company would prefer to continue using the Android system, but if it’s not allowed to, Huawei would switch to its own operating system immediately.

Yet migrating apps from Android to the HarmonyOS represents a challenge for the tech giant, as most Android apps will have to have their code altered to run on Huawei’s system. Many developers will be reluctant to devote the resources to write code specifically for HarmonyOS.

Huawei plans to invest $1 billion to encourage app developers across the globe to tailor their products for HarmonyOS, Zhang Ping’an, president of Huawei Consumer Cloud Service, said on the sidelines (link in Chinese) of the launch event.

But the company still faces an uncertain future because it remains unclear whether the Trump administration will give Huawei enough time to migrate those apps to its own operating system.