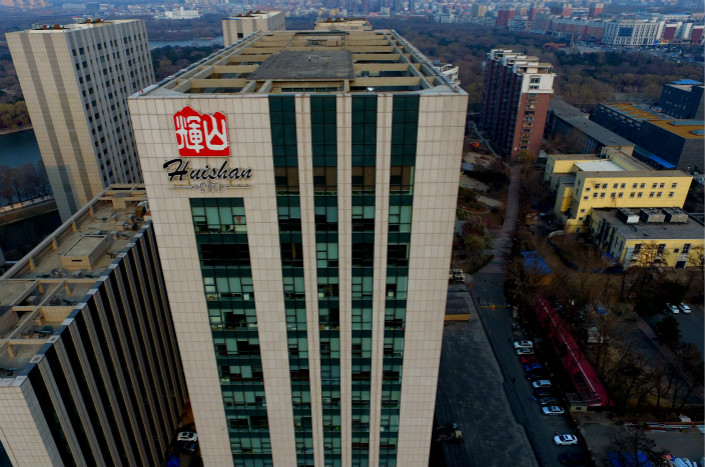 Shenyang-based Huishan Dairy was hit by a massive debt crisis in 2017. Photo: VCG

Inner Mongolian Yili Industrial Group, China’s largest dairy company, is in talks to invest in the debt restructuring of China Huishan Dairy Holdings Co., a bankrupt dairy farm operator that is mired in billions of dollars of debt.

Yili and livestock company Inner Mongolia Youran Livestock Co., have been invited to join the bidding for Huishan Dairy’s restructuring, Shanghai-listed Yili confirmed Wednesday with Caixin. But there are still uncertainties as negotiations are underway, according to Yili.

Hong Kong-listed Huishan Dairy was once one of China’s largest dairy farm operators. However, the company has been paralyzed by a capital crunch and market sell-off since 2017. Caixin reported earlier that the total debts of Huishan Dairy amounted to about 40 billion yuan ($5.7 billion), involving major banks such as Bank of China, Ping An Bank and the Industrial and Commercial Bank of China, as well as a number of brokerage, trust and financing leasing companies.

Several other sources close to the matter said other bidders including Mengniu and Bright Diary decided to withdraw on concerns over Huishan Diary’s asset quality, including potential regulatory hurdles facing its farms and the health condition of the herds.

A Huishan Dairy document regarding the restructuring seen by Caixin showed that Yili’s Youran Livestock submitted an investment and restructuring plan in late July that has been accepted by the company. The plan is pending discussion by creditors and may be subject to changes.

Song Liang, a dairy industry analyst, said Huishan Dairy’s assets have great potential but need capital to support a restructuring. Yili is among a few companies that can afford to invest in Huishan Dairy and has less concern than Mengniu and Bright Diary about excess supply from existing farms, Song said.

Established in 1957, Huishan Dairy is a household brand in Shenyang, the capital of Liaoning province in northeast China. The company listed in Hong Kong in September 2013, raising $1.3 billion. As of the end of September 2016, Huishan Dairy had 34 billion yuan of assets and 21 billion yuan of debts, according to the company’s last financial report.

But Huishan Dairy’s business has suffered since 2014 as declining domestic raw milk prices and weak demand for China-produced dairy products shrank earnings from the country’s milk producers. In December 2016, U.S. short-selling fund Muddy Waters issued a report questioning Huishan Dairy’s earnings and saying the company was worth next to nothing.

Huishan Dairy’s financial troubles escalated in March 2017 after the company said it lost contact with Ge Kun, an executive director and wife of Chairman Yang Kai. Ge had been in charge of the company’s treasury and cash operations.

On March 21, 2017, creditors of Huishan Dairy were told their debts wouldn’t be repaid on time. Two days later, Chairman Yang acknowledged that the company’s capital chain was broken.

Three days later, Huishan Dairy’s shares plunged 85%, the largest one-day percentage drop ever recorded on the Hong Kong Stock Exchange, wiping out HK$32 billion of the company’s market value. The stock has since been suspended.

Huishan Dairy removed Ge in May. But her disappearance, followed by the resignation of several senior executives, left the company to lose track of part of its financials.

In August 2017, Huishan Diary proposed a restructuring plan to create a new company that would take over its assets and affiliates. Huishan Diary said the plan won approval from more than half of its creditors, but others argued that the financials remained opaque and could hamper the reorganization.

A Shenyang court in December 2017 ruled for Huishan Dairy to start bankruptcy restructuring. But it wasn’t until February this year that Huishan Diary released a draft restructuring plan to inject 83 subsidiaries into a new company along with partial debt repayment, debt extension and debt-to-equity plans.

The Hong Kong stock exchange in May said Huishan Dairy would be delisted if it failed to submit a proper trading resumption plan before Nov. 15.