By Tianyu M. Fang and An Limin 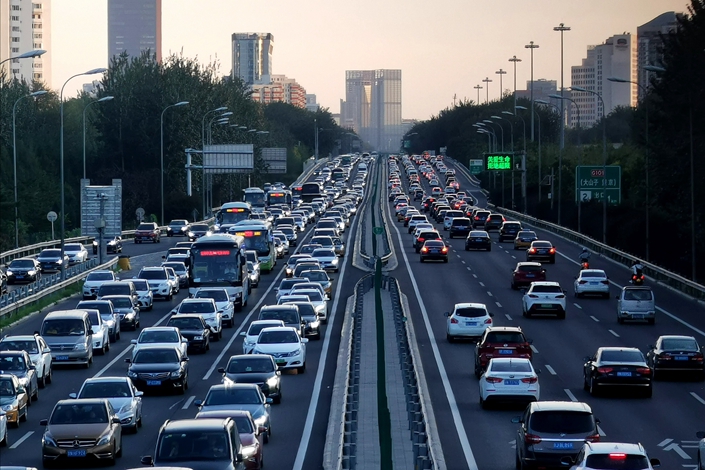 China will launch pilot programs in some cities with a view to phasing out vehicles that run on fossil fuels, a government ministry revealed Tuesday, in a move that could be an important step toward promoting the uptake of new-energy vehicles (NEVs) and mitigating urban air pollution.

In a statement responding to a proposal by the National People’s Congress — China’s top legislative body — urging the government to draw up a timeline to reduce and ultimately ban sales of gasoline-burning cars, the MIIT said it will help cities promote pure-electric public transport vehicles and establish zones where traditional gas-fueled vehicles are forbidden to go. The statement, which was signed on July 16, was only made public Tuesday.

If the pilot programs are successful, the MIIT will team up with another government body, the National Development and Reform Commission, to plan an eventual nationwide phase-out of all fossil-fuel powered vehicles, according to the statement.

While the pilot projects explicitly target all gas-powered vehicles, several Chinese cities have already rolled out policies to reduce emissions from public transport. A three-year action plan by the State Council, China’s cabinet, aims to replace gas-powered public buses with electric ones by 2020.

Two Chinese cities — the southern metropolis of Shenzhen and northern China’s Taiyuan — have gone further, pure-electric buses, taxis, and other vehicles for public use. More than 10 more have published timelines for electrification.

To remedy the latter issue, Beijing has spent nearly a decade heavily subsidizing sales of NEVs, helping China become the world’s biggest NEV market by 2015. Those subsidies are now dwindling, sowing uncertainty in the NEV industry, with a number of carmakers reporting declining sales last month. The government plans to end subsidies entirely next year.

To preempt that, the government has enacted a raft of replacement policies to sustain the transition away from fossil fuel vehicles, including raising emissions standards for gas-powered vehicles and incentivizing carmakers to manufacture NEVs. MIIT Vice Minister Xin Guobin first signaled that the government was mulling a ban on the manufacture and sale of traditional gas-powered vehicles back in 2017.

China currently has no plan to roll out a nationwide ban on sales of gas-powered vehicles, but parts of the country have taken matters into their own hands. In March, the island of Hainan became the first Chinese province to announce a total ban on vehicles powered by fossil fuels, which will come into effect in 2030.

Other countries, including the United Kingdom and France, plan to prohibit sales of fossil fuel vehicles by 2040, a date criticized by some environmental groups as not ambitious enough.