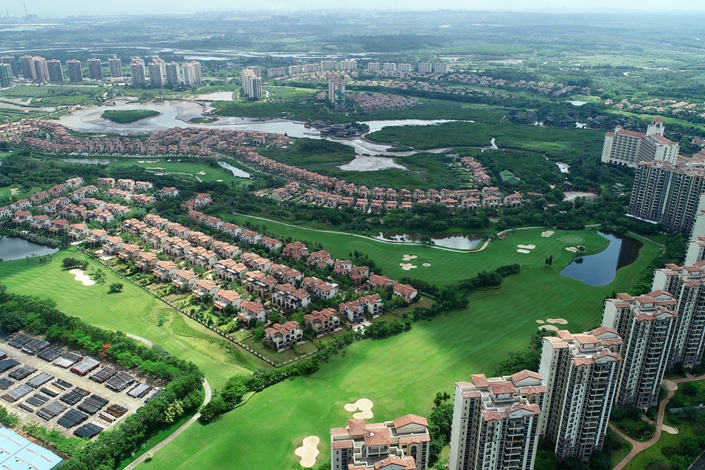 The chairman of one of China’s biggest real estate firms said the company probably won’t buy any more land for the rest of the year as the authorities tighten the flow of cash into the sector.

Guangzhou R&F Properties Co. Ltd. Chairman Li Sze Lim said at a meeting Thursday following the release of interim results that the company will take a “more conservative” approach to investing in land, and it would only consider smaller, high-quality projects.

By the end of June, R&F had around 61 million square meters of land in reserve, enough for the next four to five years, the developer said in its results.

The Guangzhou-based group reported 60.2 billion yuan ($8.5 billion) of sales in the first half, with its 6% year-on-year growth rate lagging well behind many of its peers. Unless sales are significantly higher in the second half, the company is on track to miss its 160 billion yuan sales goal for the year.

Revenue also saw weak growth, rising 2.83% to 35 billion yuan, while profit attributable to shareholders was up 2.66% to 4 billion yuan.

The sales price of R&F’s projects sunk in the period. The average per-square-meter price dropped 15% from the year before. However its gross margin was still relatively high, at 41%, while net margin stabilized at around 11.9%.

Regulators have issued a slew of measures this year to curb borrowing by the property sector in an effort to cool prices and curb financial risk. The banking and insurance regulator has asked banks to carefully screen developers’ qualifications when issuing loans and has barred trust companies from providing new financing to real estate companies.

In 2017, R&F bought 73 hotels from Dalian Wanda Group Co. Ltd. for 18.9 billion yuan as the developer shed assets to cope with its debt. However R&F’s hotel businesses saw losses widen to 423 million yuan in the first half from 184 million yuan last year.

Moreover, R&F also faces rising debt. Its liabilities totaled 33.41 billion yuan by the end of June, with its 82.38% asset-to-liability ratio — the highest since its listing 14 years ago.

Li said at the Thursday meeting that the hotel business’s losses are mainly due to depreciation that has caused book losses, but that if this depreciation is ignored the business would log annual profit of over 1.4 billion yuan.

Sun called the restrictions on developers’ fundraising “unprecedented” and said the policies have had a “significant” impact.

Country Garden Holdings Co. Ltd., one of China’s top three developers, on Tuesday said it had sacked nearly 14,800 people in the first half, the first time it has shrunk its workforce in over a decade.