Starbucks Challenger Luckin Hopes Merch Might Be a Money-Maker

By Shen Xinyue and Dave Yin 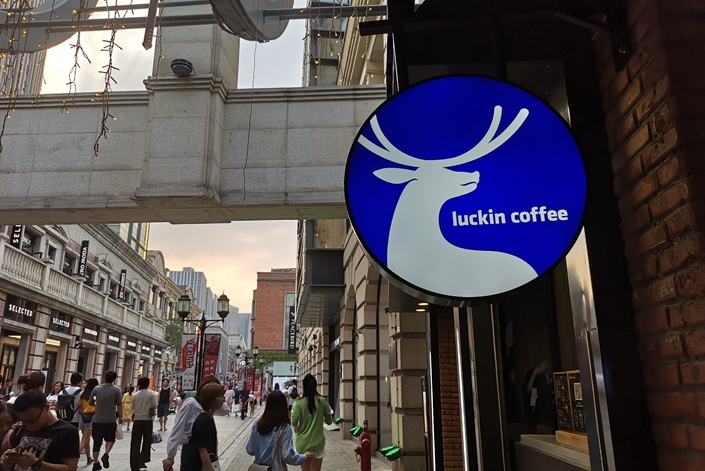 When Luckin Coffee Inc. began selling cups and mugs at its stores this week, the young Chinese company often seen as a challenger to Starbucks in China took its first stab at offering products outside of its core food and drink selections.

Among them were spill-proof tumblers adorned with the company’s deer antler logo priced at 139 yuan ($19.60) and ceramic mugs for 58 yuan. Luckin, which bills itself as a high-tech company with an app-only ordering system, opened a dedicated tab on its app and created storefronts on the popular Tmall and JD.com just to sell such merchandise.

The move is only the latest from a company trying to shed its image of being a one-trick pony, including its heavy reliance on steep discounts to draw consumers to its core coffee offerings. Luckin added light meals such as sandwiches and scones to its menu last August, juices in September, followed by snacks, set lunches, and most recently teas. At present, its offerings number close to 100.

The stakes are high for a company that has just under two years of operating history. Luckin is currently losing huge amounts of money as it embarks on an aggressive expansion that has seen it open nearly 3,000 stores in China as of the end of June, with an aim of overtaking Starbucks in the market by year-end.

Its heavy reliance on discounts is also crimping its ability to chart a path to profits — something investors are likely to demand in the not-too-distant future following its $560 million IPO in May.

In its first quarterly earnings report since that offering, Luckin revealed it lost nearly $100 million in this year’s second quarter, double its loss from a year earlier. The growing losses are taking a toll on the company’s stock, which has shed a quarter of its value from a peak in early August but is still trading about 15% above its IPO price.

As it seeks that path to profits, Luckin may be looking to offer a more diversified product range to shed its image as simply a challenger to Starbucks Corp. and look more like e-commerce giant Amazon, one of the company’s investors told Caixin. In a nod to that strategy, it added product categories including apparel, shoes, bags, watches, glasses and stationery to the official business scope of its main operating entity in China late last month, that investor added. That could mean its trademark minimalist stores could soon start to resemble convenience stores or supermarkets rather than simple coffee shops.

“Cups were just a natural place to start,” the investor said.

Existing research suggests that peripheral merchandise only benefits food and beverage chains with established client bases — something Starbucks has but Luckin lacks. Meanwhile, Luckin’s longstanding promotions, including its frequent “buy one get one free” offerings, require heavy subsidies and are conducive to quick expansion, but not profits.

Rather than Amazon, Luckin’s strategy of diversifying products would bring it closer to lifestyle brands like smartphone-maker Xiaomi or Japanese household products seller Muji, Zhuang said. That means it needs to focus on issues like product selection and management, supply chains, store diversification, after-sales service and more as it expands its offerings — creating new challenges.

Luckin could also find its new strategy challenged due to limited overlap between its current food and beverage customer base and the more traditional retail base it may be trying to cultivate, which would require a specialized management team with different skills. This could require more than just greater investment, and could take years to succeed, if it succeeds at all.

But based on its sagging stock following last week’s maiden financial results, investors may lack the patience for such a drive.

A previous version of this story used the wrong title for Zhuang Chunjie. Zhuang is the Greater China partner at management consulting company OC&C.