In Depth: Fintech Giant Lufax Has a Plan B if IPO Is No-Go 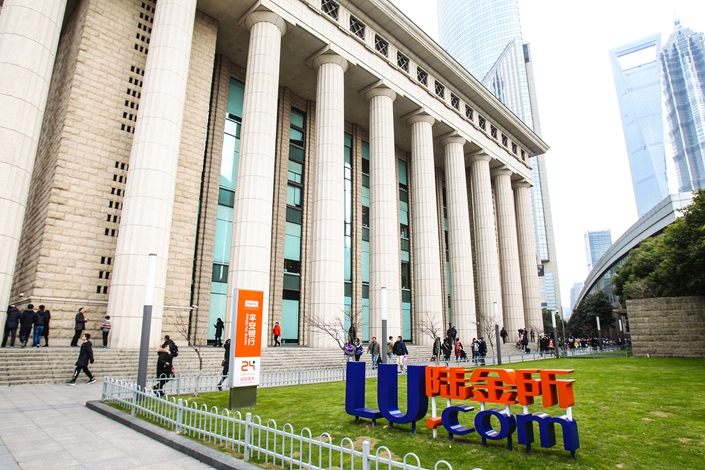 Financial conglomerate Ping An Insurance (Group) Co. of China Ltd. may consider merging Lufax Holding Ltd. into itself if the fintech unicorn fails to achieve a long-held goal of going public, Caixin has learned from multiple sources with knowledge of the matter.

The possibility that Ping An will absorb Lufax Holding, its associate company, would provide the latter’s shareholders, including Swiss financial titan UBS Group AG and sovereign wealth fund Qatar Investment Authority, with an exit for their investments that’s an alternative to an initial public offering (IPO).

Set up by Hong Kong- and Shanghai-listed Ping An, China’s largest financial holding group by revenue (link in Chinese), Lufax Holding has long sought an IPO, but has yet to succeed due in part to its controversial financial asset exchanges and peer-to-peer (P2P) lending businesses.

The fintech giant has been looking to list in Hong Kong, which is favored by many Chinese mainland companies. However, the Hong Kong Stock Exchange has required Ping An to gain the support of a mainland government entity, and the company has so far failed to do so, the sources told Caixin.

Meanwhile, mainland regulators object to Lufax Holding seeking an IPO in the U.S., the sources said. The watchdogs have cited concerns over financial data security due to its close connections with Ping An. Over the years, Ping An has accumulated mountains of data through its ubiquitous financial services. According to its 2019 interim report, the conglomerate had served 196 million retail customers and 576 million customers on the internet as of the end of June — totaling more than half of China’s population. Meanwhile, Lufax Holding had amassed 42.7 million registered users.

Lufax Holding has long mulled spinning off its once-high flying P2P lending business, as it could be an obstacle to the company’s listing, Caixin previously reported. In recent years, the P2P industry has come under intensifying government scrutiny amid a spate of fraud cases primarily stemming from slack supervision.

Ping An tapped into the P2P industry in early 2012 through Shanghai Lujiazui International Financial Asset Exchange Co. Ltd., a subsidiary also known as Lufax, which it set up in Shanghai’s Lujiazui financial hub.

Lufax soon grew into an industry leader and later became a subsidiary of Lufax Holding, which was incorporated in the Cayman Islands in December 2014.

Since 2015, Lufax Holding has collected more than $3 billion though three financing rounds and has boosted its valuation to nearly $40 billion, according to Ping An’s statement and annual reports. However, the road to an IPO is full of twists and turns, especially when compared with other leading P2P companies that have managed to list in the U.S., such as Yirendai Ltd. and 9F Inc.

In early 2015, Lufax Holding raised 3 billion yuan ($486.9 million) in its Series A round of financing (link in Chinese). And the next year, it completed a $1.2 billion Series B round that brought its valuation to $18.5 billion.

When it announced the result of the second financing round at a Shanghai press conference in January 2016, Lufax Holding CEO Gregory Gibb said that the company would go public as soon as the second half of that year.

Around that time, Lufax Holding hired at least four investment banks, including Citigroup Inc. and Morgan Stanley, for its Hong Kong-listing plan, a person close to the banks told Caixin. However, the IPO plan was postponed as Ping An’s leadership didn’t issue any further directives, even though the banks had begun conducting due diligence and drafting a prospectus, he said.

Lufax Holding suspended the listing plan in 2016 due to government actions to clean up the P2P industry, multiple sources close to the company said. That April, Beijing launched a nationwide campaign (link in Chinese) to crack down on illegal activities such as financing fraud in the internet finance sector, sending tremors through the scandal-plagued P2P industry, which had ballooned to encompass thousands of platforms.

At the end of 2016, Lufax Holding transferred its P2P business (link in Chinese) from Lufax to another subsidiary, Shanghai Lufax Internet Finance Information Services Co. Ltd., which is still one of China’s biggest P2P lending platforms with 98.4 billion yuan (link in Chinese) in outstanding loans under management at the end of June.

In 2017, Lufax Holding became profitable for the first time. And the next year, the company completed its Series C financing round at a valuation of $39.4 billion, more than doubling the previous round’s valuation. After that round, in which a source said Lufax Holding raised $1.4 billion, Ping An still held a 41.1% stake in the company.

If Lufax Holding’s IPO attempts fail, Ping An may initiate the merger plan by using cash or its own shares to purchase Lufax Holding’s equity from other stakeholders, the sources with knowledge of the matter said. However, a merger often leaves company shareholders who want to exit smaller profits than an IPO, a senior investment banker said.

Some of Lufax Holding’s senior managers didn’t agree with allowing the exchanges to do business with the company’s online platforms, a person close to the company told Caixin. “Around the world not any single exchange conducts a loan business. The essence of linking financial asset exchanges to online platforms is to allow retail investors to invest in nonstandard assets,” the person said.

In China, nonstandard assets generally refer to assets traded outside the well-regulated interbank market and securities exchanges, for example, trust loans, unlisted shares and accounts receivables. These assets are often less transparent than standard assets, such as bonds and deposits.

Until mid-2017, multiple financial asset exchanges had sold asset management products, including privately offered funds, on P2P platforms to pool investors’ money and then invested the proceeds in nonstandard assets. Some of such practices violated rules including one specifying that no more than 200 individual investors can participate in a private placement, for example, by purchasing a privately offered fund.

A turning point came in July 2017, when regulators overseeing the internet finance sector required online platforms to stop illicit cooperation with exchanges, prompting them to remove related products from their shelves. Among them was Lufax, which had sold products issued by exchanges including Shenzhen Qianhai Financial Assets Exchange and Chongqing Financial Assets Exchange.

“When being cleaned up, many of these products had yet to mature. They (Lufax) paid investors in advance with their own money, and the scale (of such products) shrank a lot,” a person close to the company told Caixin. At the time, financial asset exchanges’ products accounted for a relatively big chunk of all the products sold on Lufax’s platform, the person said.

Hu Yue contributed to this report.