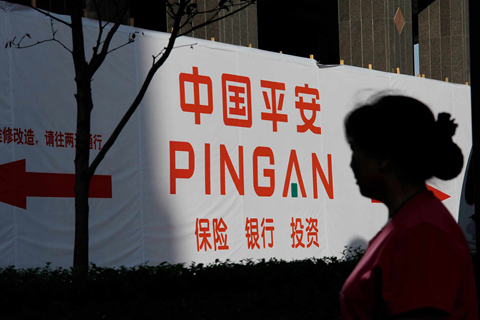 Ping An has emerged as the biggest shareholder in HSBC, holding 7.01% as of November 2018, according to HSBC’s first-half financial report. HSBC pays an annual dividend of about 6.2% of its share price. Ping An chose HSBC as a financial investment because the bank has a sound business and its attractive dividend matches the insurer’s long-term liabilities, Li said.

Last week, HSBC’s Greater China head Helen Wong resigned, the second department of a senior executive within a week following the resignation of Group CEO John Flint. The news raised speculation whether their departure was connected to the bank’s alleged involvement in the U.S. investigation into Chinese telecommunications giant Huawei Technologies Co. Ltd. HSBC denied such a connection.

The insurer has also started to study new investment areas, such as infrastructure and real estate, Chen said.

Ping An reported a net profit Thursday of 97.68 billion yuan ($13.9 billion) for the first half of 2019, an increase of 68% from a year earlier and close to the whole-year profit last year.

The company said first-half results benefited from a 10.5 billion yuan one-time gain from a tax law change on commission expenses in the period.

The operating profit from life and health insurance, the largest source of profit for the insurer, grew 36% to 48.4 billion yuan in the first six months of 2019.

While new-policy premiums continued to decline, new business value, a measurement commonly used by insurers to calculate the present value of future profits from new policies written, grew by 4.7% year on year to 41.05 billion yuan.

When asked about the planned initial public offerings (IPOs) of its technology subsidiaries, Ping An Co-CEO Chen Xinying said the company currently has sufficient funding for the technology business, and IPOs are not the most urgent matter.

Lufax Holding Ltd., a fintech unicorn controlled by Ping An, is under relatively high pressure to complete an IPO, Che Ning, an expert of internet finance, told Caixin.