By Liu Yukun, An Limin and Yang Ge 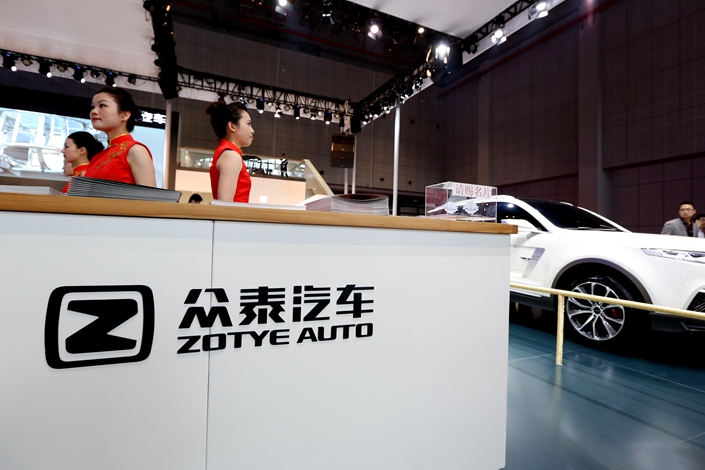 A carmaker previously set to form an electric vehicle (EV) joint venture with Ford Motor Co. has landed at the center of a clash with one of its biggest shareholders after failing to meet financial targets under an earlier agreement.

In light of the many changes both inside Zotye Automobile Co. Ltd. and in China’s auto industry in general, Ford said on Monday it was still assessing its previously announced plan to tie-up with the Chinese automaker. In late 2017, Ford and Zotye had announced a plan to set up a 5 billion yuan ($700 million), 50-50 joint venture to produce electric cars, though that plan has yet to be consummated.

That plan was one of a number of similar joint ventures announced by big foreign automakers worried about a new Beijing plan being proposed at that time setting annual electric vehicle sales quotas for all carmakers. Since then, however, many manufacturers of traditional gas-powered cars have found they can meet those quotas by buying credits from EV makers on the open market rather than selling their own EVs.

“After comprehensive consideration of various factors, including that China’s auto industry and policy environment has undergone tremendous changes, we are working with Zotye to comprehensively assess the possibility of cooperation between the two parties,” Ford said in a statement.

It issued the statement as Zotye is embroiled in an unrelated controversy stemming from its failure to reach sales targets set in a previous agreement. Zotye became publicly listed in 2017 through a “backdoor listing.” Such a process typically sees a company like Zotye sell itself to a publicly listed shell company, and then receive most of the listed company’s shares as compensation.

In Zotye’s case, the backdoor listing saw a group of 22 shareholders, led by one called New-Tech Group, receive most of the new listed company’s shares. As part of the deal, Zotye was required to meet certain profit targets for the next three years or New-Tech Group would have to relinquish some of its shares. Zotye failed to meet the target in 2017 or 2018, including its posting of a 419 million yuan loss in 2018 when it was supposed to earn a 1.6 billion yuan profit.

As a result of that shortfall, New-Tech was supposed to give 468 million Zotye shares back to Zotye, which would pay a token 1 yuan in compensation and then cancel those shares. But New-Tech had pledged much of those shares as collateral for loans, a relatively common practice in China now. New-Tech is now talking with its lenders in search of a plan to free up the shares to complete the agreement.

Zotye was once a relatively successful carmaker after purchasing an old assembly line from Toyota and making cars based on that technology. But a lack of product development capabilities ultimately came back to hurt the company, and the impact is being magnified as China’s once-hot car market has slowed sharply in the past year. In the first in seven months of 2019 Zotye sold only 115,000 cars, down 31.9% from a year earlier. The company recently issued a profit warning, saying it expects to report a loss of 270 million yuan to 230 million yuan in the first half of the year, down nearly 200% from a year earlier.