Yuan Poised for Worst Month on Record After 7 Barrier Broken 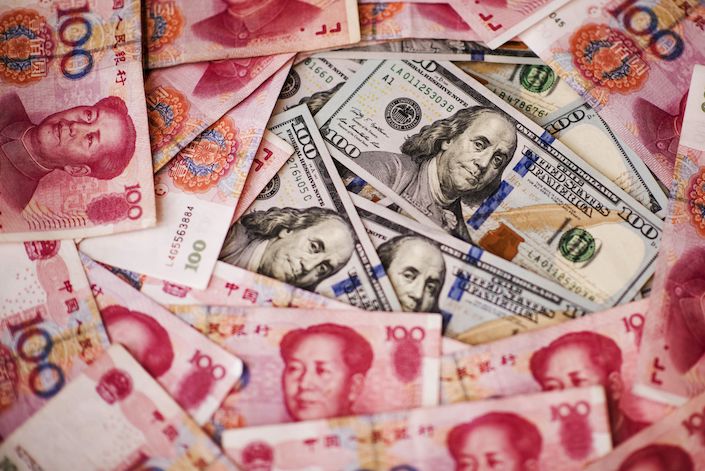 The Chinese currency has plummeted 3.9% this month against the dollar, the biggest loss since January 1994. Photo: Bloomberg

(Bloomberg) — China’s yuan is headed for a record monthly plunge as an intensifying trade war with the U.S. damages investor confidence.

The currency has plummeted 3.9% this month against the dollar, the biggest loss since January 1994, when the modern exchange-rate regime was adopted. The slump past the level of 7 yuan to the dollar for the first time since the Financial Crisis a decade ago comes as China-U.S. trade tensions escalate. Fresh signs of a slowing economy and bets on further monetary easing have also helped fuel the retreat.

Without any clear signs of progress in trade negotiations, the “outlook will deteriorate, both for the Chinese economy and markets,” Dariusz Kowalczyk, senior emerging market strategist at Credit Agricole, wrote in a note dated Monday. The yuan may decline in the near term to 7.3 per dollar, he said.

There are signs the People’s Bank of China is growing uncomfortable with the yuan’s drop. It set the daily reference rate at stronger-than-expected levels for a fifth straight session on Tuesday. Sustained weakness risks creating a cycle of capital outflows and more currency softening, a scenario that may lead to financial instability.

The yuan plunged to the weakest level since February 2008 this week after President Donald Trump and the Chinese government exchanged tariff threats on Friday. The PBOC may allow the currency to slide to 7.5 by the end of this year as it uses depreciation to counter the tariffs, Bank of America Merrill Lynch strategists led by Claudio Piron wrote in a note. The currency slipped 0.19% to 7.1659 a dollar as of 5:11 p.m. in Shanghai.

Not only has the yuan weakened against the greenback, it’s also at a record low against a basket of its peers. The Bloomberg replica of the CFETS RMB Index — which tracks the yuan against the currencies of 24 trading partners — has fallen to 91.1, the lowest level since the gauge was introduced in 2015.

Still, the PBOC can rein in depreciation if it wants to. On Tuesday, the central bank set its daily fixing stronger than the level that analysts and traders projected in a Bloomberg survey. That was the largest such bias since June. To beat back bears, Beijing can also issue verbal warnings, sell bills in Hong Kong to boost the cost of shorting and directly intervene by dumping dollars.