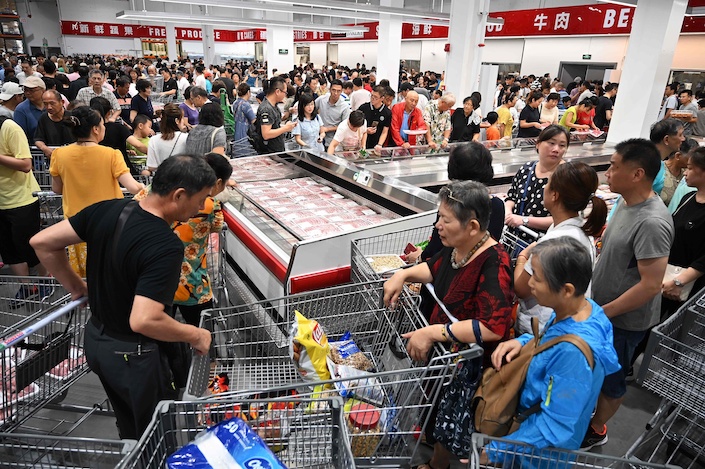 Costco Wholesale Corp. will limit the number of customers in its Shanghai store to 2,000 at any one time, the American retail giant said after a mad rush of shoppers forced it to close early Tuesday when the store debuted.

Costco notified member customers of the limit Wednesday via text message and app alert. One member told Caixin that just one hour after the opening, Costco issued an update saying the store was full and newcomers needed to wait three hours for entry.

The 14,000 square-meter venue in southwest Shanghai was overrun Tuesday as frenzied shoppers rushed in for discounted products from Hermes Birkin bags to luxury liquor Kweichow Moutai and the signature roasted chicken.

There is no official figure for how many customers were in the store, but media estimates ranged as high as 10,000 to 20,000. Shoppers queued for hours at the checkout while the influx of visitors caused traffic chaos in the neighborhood, raising safety concerns and forcing Costco to shut the store in the afternoon.

Costco set up an online store for Chinese customers five years ago. Goods offered at its North American stores, including health-care products, snacks and brand-name clothes, have long been sought by Chinese shoppers through cross-border e-commerce platforms or individual agents known as “daigou.”

Costco’s push into China defies the growing trade tensions between the United States and China. It also goes against a tide of many global rivals that are retreating from the country.

The French supermarket chain Carrefour in June announced the sale of a majority stake in its China operations to local retailer Suning.com Co. Ltd. after more than two decades in the country. German giant Metro said in March it would sell its China operations for $1.5 billion to $2 billion, with potential buyers including Tencent, Alibaba, Suning, Yonghui, Wumart and Walmart. British retailer Tesco and South Korea’s Lotte Mart have also retreated from China over the past few years.

Costco’s membership-based, bulk-buying business model differentiates it from most of these rivals. It allows only customers who’ve paid to join and a limited number of their family members to make purchases at its stores. The annual membership fee in China is 299 yuan ($42), lower than the $60 charge in the U.S.

To attract new members, the Shanghai store offered a special price of 199 yuan for introductory membership. Costco said before the Aug. 27 opening that it already had tens of thousands of registered members.

Globally, Costco has 96 million member customers, providing a stable revenue source from fees. To attract shoppers, Costco has kept a relatively low gross profit margin of around 11%, compared with 20% to 25% for most of its rivals.

A key element of Costco’s business model is to strictly control costs by reducing stock keeping units, simplifying packaging, controlling logistics and limiting store decoration. In North America, its warehouse-like stores are often placed in suburbs for cheaper rents. Costco has maintained business and management expenses around 10% of revenue, half the costs of Walmart and Carrefour.

In the third quarter of 2019, Costco posted revenue of $34.7 billion from more than 700 stores globally, including $33.9 billion from sales and $776 million from membership fees. Net profit reached $906 million.

But analysts still have doubts about whether Costco’s business model can work in China and whether its debut success can last.

Membership-only, bulk-buying retail is rare in China partly because of Chinese consumers’ lower acceptance of fee-paying memberships, said Zhongtai Securities Co. in a research note. Unlike most U.S. families, which tend to buy products in bulk, haul them home in cars and store them in the house. Most Chinese city dwellers prefer to shop frequently in small volumes, the brokerage said.

Bulk-buying retailers in China will also face challenges of higher operating costs such as rents, according to Zhongtai.

One of the few successful membership-based, bulk-buying retailers in China is Sam’s Club, owned by Walmart. Entering China in 1996, Sam’s Club has 2 million members in the country paying 260 yuan a year. But Sam’s Club has expanded slowly in China over the past two decades, opening only 26 stores across the country. Walmart said in its second-quarter financial report that Sam’s Club stores in China reported double-digit sales growth, outpacing stores in other countries. Walmart said it planned to increase the number of Sam’s Club’s stores to 40 by the end of 2020.

Analysts have said that Costco may do better in larger Chinese cities than in smaller ones because of differences in customer recognition of the U.S. brand.

An industry analyst told Caixin earlier that Costco’s low-price strategy that has succeeded elsewhere relies on the company’s dominant bargaining power over suppliers. But in China’s highly segmented retail market, suppliers have more choice, eroding such an advantage.