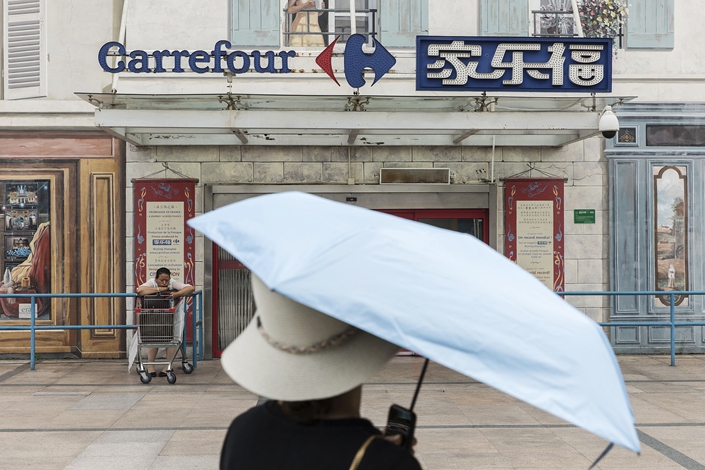 A pedestrian walks past a Carrefour supermarket in Shanghai on June 24. Photo: VCG

Walmart could well be the last man standing of the three multinational retail giants to break real ground in China.

Metro is seeking to sell its local operations and Carrefour did so last month.

It’s left market watchers wondering if other foreign retailers are also set to give up on China, as a lack of local know-how (and distribution channels) has seen most bleed cash.

They’ve also faced an assault from domestic e-commerce players big and small. From giants Tmall and JD.com, to grocery apps Miss Fresh and Meicai, consumers here have been spoilt for choice.

Foreign players are reexamining their global strategies — and whether they should continue to expand in a country where profits are hard-won, or cut their losses and focus on untapped markets instead.

In June, the French retailer said it agreed to sell an 80% stake in its Chinese operations to Suning for 4.8 billion yuan ($699 million).

Carrefour’s Chinese unit saw its 2018 sales drop by nearly 8% to 3.6 billion euros ($4 billion), according to the company’s annual report. In comparison, the group posted a 3.4% rise in net sales to 80.9 billion euros last year.

Metro opened its first mainland store in Shanghai in 1996. It now runs 95 hypermarkets across 59 cities in China. Carrefour came to China one year ahead of Metro, and now operates 210 supermarkets and 24 convenience stores.

All eyes are now on Walmart to see if the U.S. giant will charge ahead with its own China expansion.

If investment figures are anything to go by, the retailer said this month it will invest 8 billion yuan to build or renovate 10 logistics centers in China over the next decade.

The Arkansas-based retailer, which has been in China since 1996, operates a multi-brand format here. As of January, it had 443 stores in China, including the main Walmart brand and the membership-only Sam's Club.

To secure a firmer foothold, Walmart has partnered with JD.com, China’s second largest e-commerce operator, since 2016. It has also invested more than $300 million in a Chinese delivery firm with JD.com, Dada-JD Daojia.

Walmart upped its bet in China, testing smaller supermarkets infused with technologies that allow buyers use their smartphones to pay at the checkout. The first outlet debuted in the southern city of Shenzhen last year.

Despite such efforts, Walmart’s China operations pulled in only $10.7 billion in sales last year, less than one-tenth of its international revenue, according to CNN.

China Merchants Securities said in a research note that Walmart had in fact shuttered more than 40 outlets across 2017 and 2018, and it had closed 15 in the first half of this year.

While the U.S. retailer seems to be pulling out all the stops to make it work in China, its international peers have done the opposite.

After nearly a decade in China, British retailer Tesco in 2013 merged its China operations with China Resources Enterprise, dropping down to a 20% stake. The latter’s Vanguard unit operates about 3,000 stores, mainly hypermarkets or supermarkets, across China.

British retailer Marks & Spencer Group PLC shut down 10 brick-and-mortar stores on the Chinese mainland in 2016, citing low brand awareness. In January 2018, it closed its virtual shop on popular online platform Tmall, marking a complete bow out from the market.

Though it had clinched the coveted Carrefour deal, analysts said Suning shouldn’t get too excited just yet.

If Carrefour cedes full control of its Chinese operations, Suning will have to scramble to source imported foreign brands — a niche that sees Carrefour stand out from its domestic rivals, according to one executive who manages a midsize retail chain in China. The person asked not to be named.

It also remains to be seen if Suning can revive Carrefour’s non-performing balance sheet. As Gu Guojian, head of Shanghai Chain-Store & Franchise Institute, puts it: “No doubt Carrefour is a good brand to get your hands on, but be aware of its potential internal management issues that made it trail behind others.”