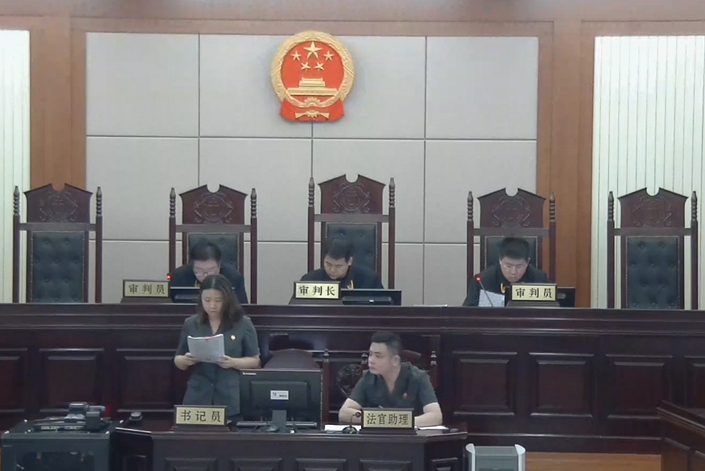 A major Chinese accounting firm has sued China’s securities regulator in Beijing for penalizing it more than 5 million yuan ($720,000) in December for allegedly botching an audit of a now-delisted metals company.

Ruihua Certified Public Accountants LLP, one of the country’s largest accounting firms, demanded in court (link in Chinese) Tuesday that the China Securities Regulatory Commission (CSRC) return the 3.9 million yuan that it fined the company for allegedly failing to perform due diligence properly on some of its earlier audits, according to video of the hearing. Beijing No.1 Intermediate People’s Court did not immediately announce a verdict.

The firm also demanded the CSRC repay it the 1.3 million yuan in auditing fees that the regulator had seized as part of the penalty. In addition, Ruihua also asked for the regulator to roll back the three 100,000 yuan fines against three of its accountants, according to the video.

In December, the CSRC said in a statement (link in Chinese) that the 2013 and 2014 annual audits that Ruihua filed on Chengdu Huaze Cobalt & Nickel Material Co. Ltd., which the CSRC has accused of fraud, contained “false” information.

The regulator accused Ruihua of violating auditing standards by failing to inquire with the Huaze governance team about whether they knew there was fraud at the company, according to the statement. The CSRC said Ruihua had only talked with two Huaze executives about the matter.

In court, Ruihua argued that the two managers it spoke with did belong to the governance team under China’s Company Law. It also complained that CSRC officials had taken away all the documentation from the audits during the investigation, which violated its rights and hurt its ability to defend itself. The company said that the CSRC should have produced all of the documentation pertinent to the case in court, not just those documents that support its own argument.

The three accountants fined by the CSRC also argued in court that the false statements in the audit reports were not because of their failure to perform due diligence properly, but rather because Huaze deliberately lied and provided false accounting files. They asserted that both the CSRC and the judges should be aware of the limits of auditing.

Huaze had been listed on the Shenzhen Stock Exchange, but was forced to delist last month after it reported annual losses from 2015 to 2017 and then failed to submit an annual report for 2018.

Huaze’s case was not the only one that Ruihua has been penalized for. Since December 2016, Ruihua has been punished several times by the securities regulator and has been caught up in two ongoing investigations, including the fraud case of Shenzhen-listed Kangde Xin Composite Material Group Co. Ltd.

It is not unusual for China’s securities regulator to get sued. Official data (link in Chinese) showed that there were 122 lawsuits related to administrative penalties filed against the CSRC and its branches from 2015 to 2017.