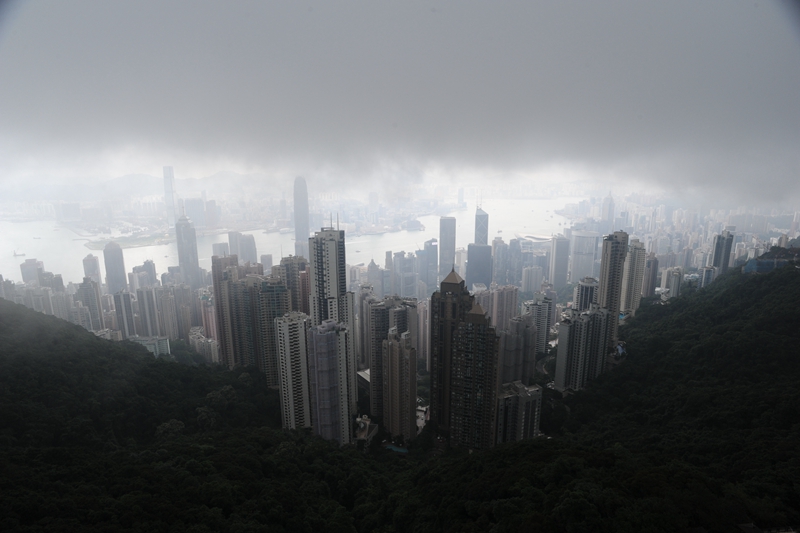 On Russell Street in Causeway Bay, the world’s most expensive retail strip based on rents, Italian luxury brand Prada is closing its 15,000-square-foot store next year when the HK$9 million ($1.15 million) monthly lease expires. The landlord is even offering to slash the rent by 44%, according to the South China Morning Post.

Not far from where thousands of black-clad protesters marched Aug. 18, the Prada store is just one casualty in Hong Kong’s property sector, a pillar of the local economy accounting for 10% of GDP. Home sales are drying up, and those sellers who find buyers are taking haircuts of 3% to 10% off listing prices, according to data from agents.

“If things keep getting worse, more than 3,000 agents could lose their jobs by the end of the year,” said Liu Wai-keung, chief executive of Ricacorp Properties, one of the largest real estate agencies in Hong Kong.

Deterioration in the property market may be helping to lead the way. It has become common lately for owners of retail properties to sell at deep discounts or cut rents, Midland IC&I Ltd. Chief Executive Wong Hon Shing told Caixin. Many tenants are asking for rent cuts of 20% to 30%, and some retailers at shopping malls are joining forces to negotiate collective reductions, Wong said.

Real estate weakness directly affects Hong Kong’s fiscal revenue and employment. Land sales are expected to fetch HK$143 billion this year, or about 22.8% of the city’s revenue. As of the end of July, Hong Kong’s four biggest developers employed more than 100,000 people in addition to about 300,000 workers in the construction sector, meaning that more than 10% of the city’s 3.86 million working population rely on real estate and related industries for a living.

Hong Kong’s retail rents and transactions are closely tied to the city’s tourism. Even before the mass protests started in June, the U.S.-China trade dispute, the depreciation of the yuan and a weakening stock market had already dampened spending of local consumers and tourists from the mainland. Hong Kong retail sales recorded five consecutive months of decline through June and were down 2.6% year-on-year in the first half of 2019. Sales of jewelry and watches, a key support to the retail leasing market, plunged 17% in the first six months.

Things got even worse after 31 countries and regions, including the Chinese mainland, Japan and the U.S., issued warnings about travel to Hong Kong citing the civil unrest. Visitor arrivals Aug. 15-20 plunged 49.6% from the same period last year, the largest decline in recent years, Hong Kong Commerce Secretary Edward Yau said.

The protests have not only deterred tourists but also kept local residents from eating out and shopping, making restaurants among the hardest hit, Midland’s Wong said.

Tsui Wah Restaurant, a famous Cantonese diner, closed two locations at Causeway Bay. The neon signs hanging at the popular destinations for tourists have turned dark, and the windows are plastered with flyers giving contact information for real estate agents.

A restaurant owner in Kowloon’s Sham Shui Po, known as the best area for tourists to buy discount electronics, said he might suffer the first monthly loss in more than a decade in August.

“When the protesters marched by one day, we only had one table of customers,” he said.

Drug stores and other retailers heavily reliant on tourists were also hard hit, Midland’s Wong said. A pharmacy on Russell Street recently renegotiated a 23% rent reduction. Rents for retailers in residential areas are also falling as protests spread all over the city, Wong said.

According to commercial real estate agent Centaline Commercial, the total number of commercial leasing transactions rose 8% in July from June, but total rents declined by 3%, meaning that average rents came down even more.

“With no buyers and no tenants, many of my colleagues are taking unpaid leave,” an agent told a Caixin reporter. He said some friends in the insurance and tourism sectors have come to him to list their condos for sale, and some plan to move to Shenzhen, the mainland city bordering Hong Kong.

A new housing complex at Lohas Park, a middle-class residential area in southeast seaside, is about to open for sale. Usually during the promotion period for new condos, agents flood the nearby subway station to distribute fliers. On one recent day, there were only half a dozen agents hanging around the nearest subway station exit, and few people stopped to consult with them.

The number of property transactions in Hong Kong recorded with the Land Registry in June and July fell by almost half from the previous two months. August might be even worse. Midland said it expects that new and existing housing sales in August could decline a further 20% from July.

Ricacorp Properties CEO Liu said the social unrest eroded the confidence of home buyers and owners. Potential buyers are becoming more cautious, and some choose to rent instead of buying, Liu said.

Sammy Po Siu-ming, CEO of Midland Realty, said he expected that home prices could drop 3%-5% in the third quarter, but the outlook is still unclear. Morgan Stanley predicted a 10% decline in an index of existing house prices through March next year from the peak in June. The investment bank also revised its estimate for 2019 Hong Kong property price growth to 2% from 10%.

Faced with the headwinds, property developers are growing skittish.

Land auctions can often reflect developers’ expectations for the housing market. On June 11, two days after the first peaceful mass protest, Goldin Financial Holdings walked away from a commercial plot it had won in bidding less than a month before, citing “social contradiction and economic instability.” The developer forfeited its HK$25 million deposit.

In late July, Hong Kong’s government sold a residential plot to a consortium of three developers for HK$12.74 billion, below the low end of an expected price range between HK$13 billion and HK$16.1 billion. In mid-August, Far East Consortium International won the bidding for a commercial plot at a 15% discount to the expected price.

Over the past two decades, Hong Kong’s retail rents and residential property markets have always been resilient during downturns, including the 1997 Asian financial crisis, the 2003 SARS epidemic, the 2008 global financial tsunami and the 2014 Occupy Central movement. But this time, the industry seems more pessimistic than ever.

“It would be very challenging to just rely on the industries to reverse the downturn,” said Gary Ng, an economist at French investment bank Natixis. The Hong Kong government needs to take the lead in restoring consumer confidence, but the HK$200 billion relief measures the government announced recently might not be enough, Ng said.

Some analysts said the fundamentals of Hong Kong’s housing market are still solid. Noting that the number of negative-equity mortgages – those where a property’s current value is less than the mortgage balance – hasn’t increased, some economists say the housing market doesn’t appear poised for a sharp downturn.

While demonstrations have cast a shadow over the market, demand is being delayed rather than evaporating, and potential buyers are waiting for the right time to return, analysts at Citigroup said in an Aug. 15 report.