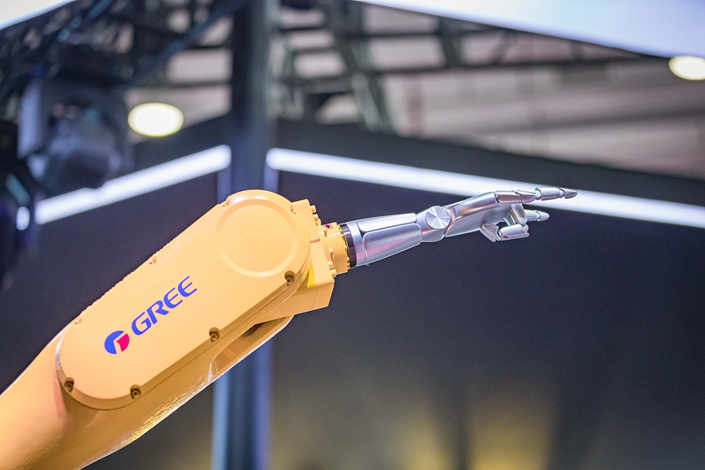 Gree Group’s stake in air conditioner giant Gree Electric will be priced at no less than 44.17 yuan per share, making the deal worth at least 39.9 billion yuan. Photo: VCG

Of around 25 firms and consortia that had expressed interest in a major stake of Gree Electric, only two remain, as the air conditioner giant inches closer to a deal that has captured the market’s attention for months.

A Zhuhai-based private equity fund backed by Hillhouse Capital Group, and a consortium of two companies controlled by Hopu Investment Management Co. Ltd., both filed application materials and paid deposits ahead of a deadline on Monday, according to a Gree Electric Appliances Inc. statement (link in Chinese) to the Shenzhen Stock Exchange.

Both companies paid an eye-watering 6.3 billion yuan ($879 million) to be in the running to buy 15% of Gree Electric and become its largest shareholder.

State-owned Zhuhai Gree Group Co. Ltd., controlled by the Zhuhai government, is the current majority owner. The parent first announced its intent to sell a 15% stake in the company in April.

Competition to buy the stake has been intense. In May, about 25 investors showed up at Gree Electric’s southern China headquarters to be briefed on the deal. In addition to Hillhouse Capital and Hopu Investment, other attendees included Singaporean sovereign wealth fund Temasek Holdings Pte.

Gree Group’s stake will be priced at no less than 44.17 yuan ($6.25) per share, making the deal worth at least 39.9 billion yuan, according a statement last month. That represents a 30% discount on Shenzhen-listed Gree Electric’s current trading price of 58 yuan.

Hopu, a top Chinese private equity firm, was established in 2007 by former Goldman Sachs partner Fang Fenglei and ex-KPMG China Chairman Dominic Ho. Hillhouse was founded by entrepreneur Zhang Lei with offices in many cities globally, including Beijing, Hong Kong, Singapore and those in the U.S.

Still, there are questions over whether either bidder will be able to seal the deal.

Hillhouse, already one of Gree’s 10 largest shareholders with 0.72% stake, also owns a 0.89% stake of rival Midea. That means it may breach Gree Group’s bidding rules that hold that bidders should not be involved in businesses that compete with Gree — whether directly or indirectly.

Although that same rule does not limit where bidders can be registered, a Zhuhai government source previously told Caixin that the local government was likely to favor bidders registered on the Chinese mainland.

One of the two companies in the Hopu consortium’s bid for the deal — Genesis Financial Investment Co. Ltd. — is registered in Hong Kong.