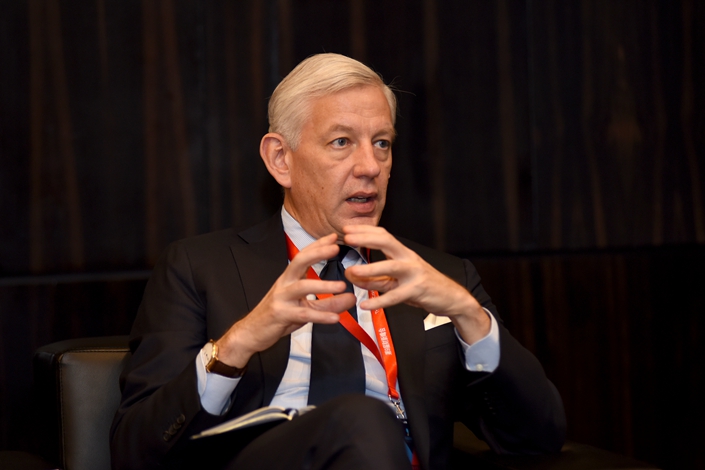 Dominic Barton, former managing director of McKinsey & Co., was named Canada's next ambassador to China amid a diplomatic stalemate between the two countries. Photo: Caixin

A former McKinsey executive has been made Canada’s new ambassador to China, over half a year after his predecessor was sacked amid a diplomatic spat between the two countries.

The appointment of Dominic Barton — a former global managing director at the consulting firm — was announced by Prime Minister Justin Trudeau on Wednesday.

“It is an honour to be appointed as Canada’s Ambassador to China. The relationship between Canada and China is an important one, and I will work hard to represent our great country and to resolve the challenges that currently exist,” said Barton, according to the official statement.

Trudeau was quoted in a news release from his office as saying Barton’s “years of experience in Asia, and the significant global economics expertise he has acquired over an impressive career, will make him a great choice to represent Canada — and Canadian interests — in China.”

Ties between the two nations have been strained since December, when Meng Wanzhou, chief financial officer at Chinese telecom giant Huawei Technologies Co. Ltd., was arrested in Vancouver at the request of the U.S., which seeks her extradition in relation to alleged violation of U.S. sanctions on Iran. She remains under house arrest in her Vancouver mansion.

China later arrested two Canadians on suspicion of spying. The pair are still in Chinese custody, but their location has not been publicly revealed. China also suspended imports of some key Canadian products, including canola seed.

Barton is to replace John McCallum, who was ousted in January after facing criticism for comments he made to Chinese media on Meng’s case — among them, that Meng could make a “strong case” in court against any U.S. extradition.

Barton, 56, was based in Shanghai from 2004 to 2009, where he worked as McKinsey’s Asia chairman. In 2009, he was granted a Shanghai Magnolia Award, which is given by the city to foreigners who have made significant contributions to business, finance and other industries in the city.

Barton’s other China connections include a position on the advisory board of a China Development Bank subsidiary and an adjunct professorship at Beijing’s prestigious Tsinghua University. He has left both roles.

Barton’s appointment was welcomed by some in the Canadian business community.

Goldy Hyder, president and CEO of the Business Council of Canada, said in an official statement that “Dominic Barton brings decades of experience and knowledge of China, which are invaluable assets at this critical time.”

However Erin O’Toole, a Conservative Party member of Canada’s parliament and foreign affairs commentator, said in a statement widely quoted in the media that Trudeau was “replacing one Liberal insider with another Liberal insider at a time that we should have a professional diplomat who is conversant with the language, culture and protocols needed to secure the swift release of Canadian citizens and stabilization of export trade.”

In a 2018 interview with Caixin (link in Chinese) while he was still at McKinsey, Barton said he was interested in public service and that he missed daily life in Asia after living elsewhere for several years.